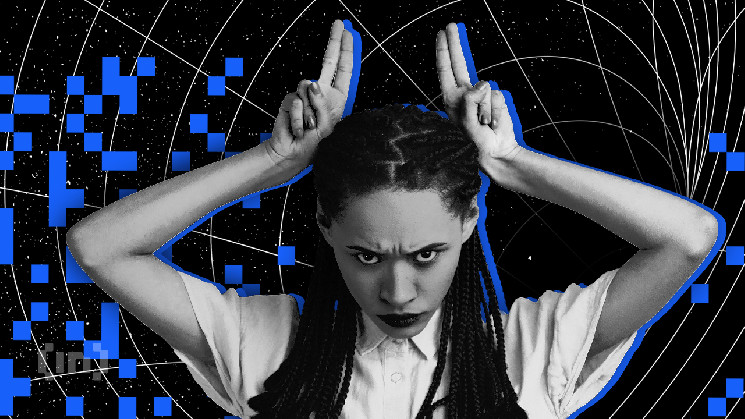 The positive price performance of BTC in the first weeks of 2023 led the on-chain Unrealized Profit/Loss Indicator (NUPL) to start signaling the start of a bullish cycle. For the first time since August 2022, the NUPL 14-day moving average began to show positive sentiment and moved into the orange zone. Historically, this is traditionally associated with the end of an accumulation phase and the start of a new bull market.

BeInCrypto reviewed this one of the most popular on-chain bitcoin indicators to try to determine if BTC is indeed exiting a protracted bear market and what the size and duration of the next bull cycle could be.

A little about the NUPL on-chain metric

It shows whether the value of all coins has become higher or lower compared to the last movement, if all of them were sold today. Negative values ​​(below zero) indicate that the market is in the zone of cumulative losses, and vice versa.

Historically, BTC NUPL values ​​above 0.75 are relatively accurate in predicting a market top formation. On the contrary, values ​​below 0 are observed near the bottom.

NUPL enters the zone of hope

During the previous bull market, the NUPL 14-day moving average peaked at 0.73 on February 2, 2021. At that time, the BTC rate was $54,000. After that, Bitcoin continued to rally, but this on-chain metric no longer grew.

Even when Bitcoin hit an all-time high of $69,000 in November 2021, the indicator hovered around 0.63. At the same time, during the entire previous bull market, this value never exceeded the 0.75 mark, above which the blue area of ​​​​euphoria / greed begins. The flat top of the previous bull cycle, corresponding to the Wyckoff distribution pattern, brought NUPL only to the green zone of belief/denial. 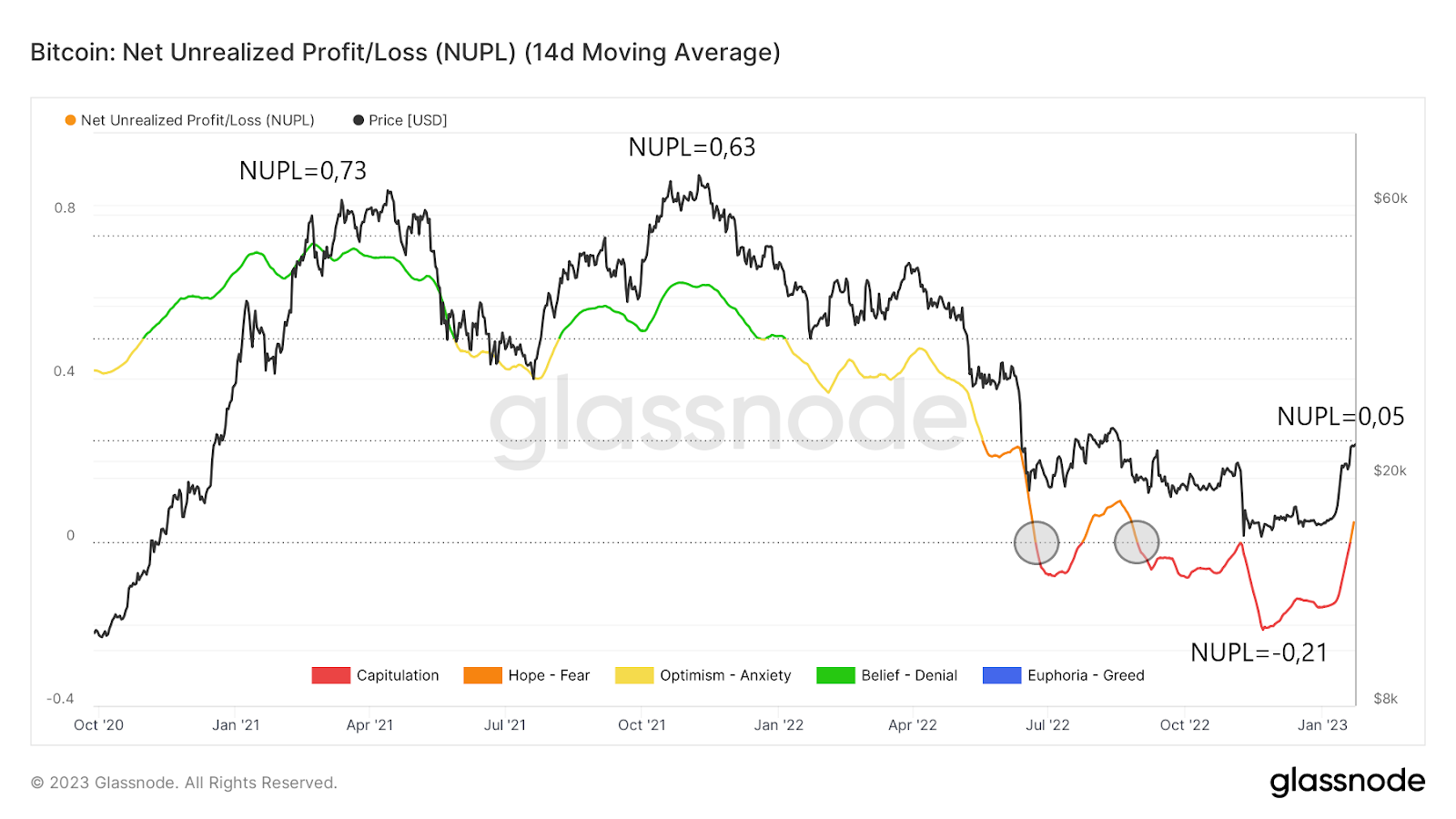 Throughout the 2022 bear market, NUPL continued to decline in tandem with BTC. The on-chain metric first entered the red surrender area in June, and then again in August (gray circles).

After the second drawdown into the negative zone, the indicator remained negative for another five months. During this time, he registered a surrender minimum at -0.21. This happened just a day after Bitcoin bottomed at $15,476 on November 21, 2022. After that, the indicator returned to the orange hope / fear zone just a few days ago, reaching a value of 0.05.

NUPL signals the start of a bull market

On the long-term chart of NUPL and BTC, we can see the significance of the indicator returning to positive territory. This is usually a sign of the end of not only the bear market, but also the subsequent accumulation phase (green circles).

In 2015 and 2019, the return of the NUPL on-chain metric to orange coincided perfectly with the end of the accumulation phase. The situation looked somewhat different after the first ever bear market in 2012. Then the index rose to the zone of positive values, but then returned to the capitulation area, after which it rose again (blue and green circles).

In the current cycle, we see a similar picture. The collapse of the crypto market amid the collapse of the Terra (LUNA) ecosystem was the first catalyst that prompted this indicator to go into the surrender zone. A return to orange levels failed to trigger a rebound, and NUPL pulled back into the negative zone, where it bottomed after the FTX collapse in November 2022.

However, the second return of the metric to the area of ​​hope may be a signal of the end of the accumulation phase. This is confirmed by the BTC price, which is currently hovering around $23,000. Recently, Bitcoin took a number of significant technical milestones and broke through important resistance in the $21,500 area. This allowed the currency to form the first long-term rising high for the first time since the end of the previous bull market. 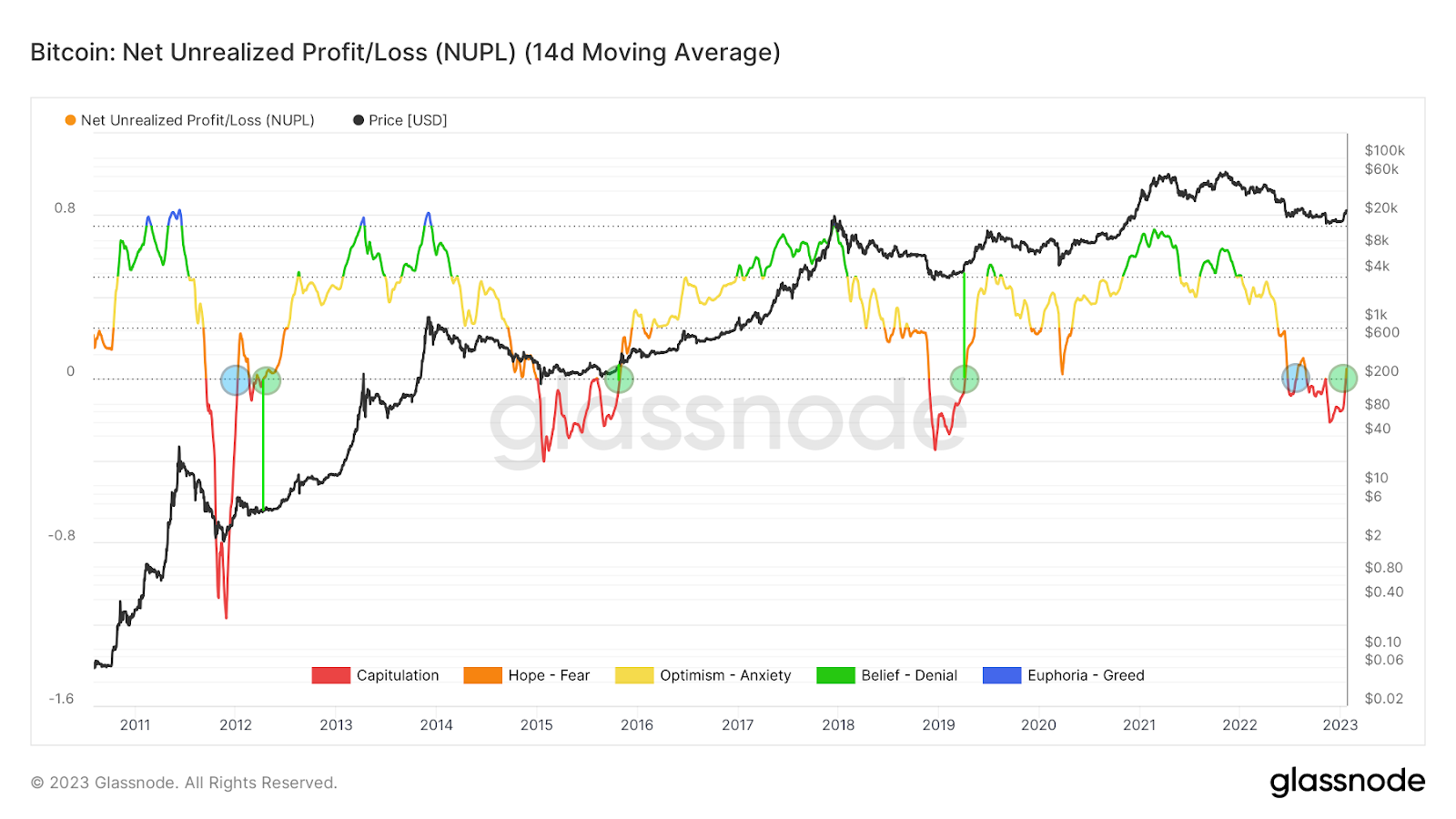 How far can BTC go?

Based on historical data, we tried to predict the scope and duration of the new bull cycle, as well as new peak levels for bitcoin. Of course, for this to happen, our two initial assumptions must be confirmed: that BTC has indeed bottomed, and that the entry of NUPL into the orange zone of hope does indeed indicate the end of the accumulation phase.

In addition, according to the theory of lengthening Bitcoin cycles and shrinking profits, we assume that each subsequent peak in BTC will be proportionally lower than the previous maximum. However, they will also be achieved over a longer period of time. Here is what historical statistics show for bull markets and their peaks:

Based on the average cycle ratio (around 1.26x) and declining returns (average 4.5x), we can predict the potential peak of the next bull market. A simple calculation gives us a BTC price of $78,000 by January 5, 2026.

This estimate clearly goes against the rosy expectations of “$100,000+ bitcoin,” but it is more realistic.