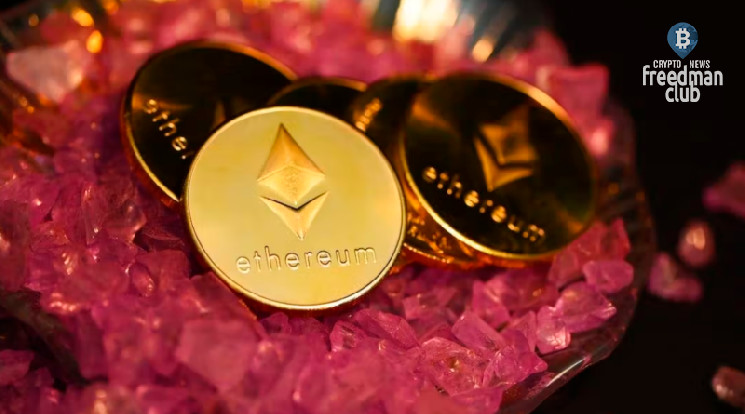 In September, the Ethereum Merge took place, as a result of which Ethereum switched from a Proof-of-Work algorithm that requires mining to a Proof-of-Stake algorithm that works on staking. Users got slightly cheaper gas and a small increase in the number of blocks created per day, along with the looming problem of censorship and decentralization of the network as a whole.

There is a much more dangerous problem with the new Ethereum staking. In this article, we will talk about one of the largest Ponzi schemes in history. These are large, globally renowned VC-backed validators that offer win-win conditions for anyone looking to stake their ETH profitably. But in fact, investors are in a pyramid scheme of more than $10 billion that could collapse at any moment.

The Proof-of-Stake algorithm assumes that the “weight” of the validator’s vote depends on the number of coins staked. The amount of blocked funds determines the reward of the node. To become an Ethereum validator, you need to deposit 32 ETH. What many people don’t know is that once ETH is delivered, it cannot be withdrawn until the Ethereum mainnet upgrade called Shanghai, which is currently undetermined. Thus, users simply do not have the opportunity to withdraw staked tokens. This situation has allowed large validators to organize a Ponzi scheme that no one is talking about yet.

Given that Ethereum requires 32 ETH to be staked by validators that produce blocks, a large number of people simply cannot afford to allocate that amount for staking. Therefore, for those who do not have such an amount of ETH, large protocols – validator aggregators – offer to delegate almost any amount and receive a percentage of profitability on it. We are talking about sites such as Lido, Rocket Pool, Stake Wise, StaFi, Ankr Staking, etc.

In addition, when delegating Ethereum to these protocols, they exchange it for various wrapped tokens such as sETH, stETH, rETH, rETH2, etc. For example, the Lido protocol gives away its stETH tokens in exchange for users’ ETH, which they cannot exchange back to ETH on Lido itself or other similar sites. In essence, by making an exchange and placing their ETH on the aforementioned protocols, users lose it forever, and in return receive a token that cannot be exchanged at the place of its receipt. 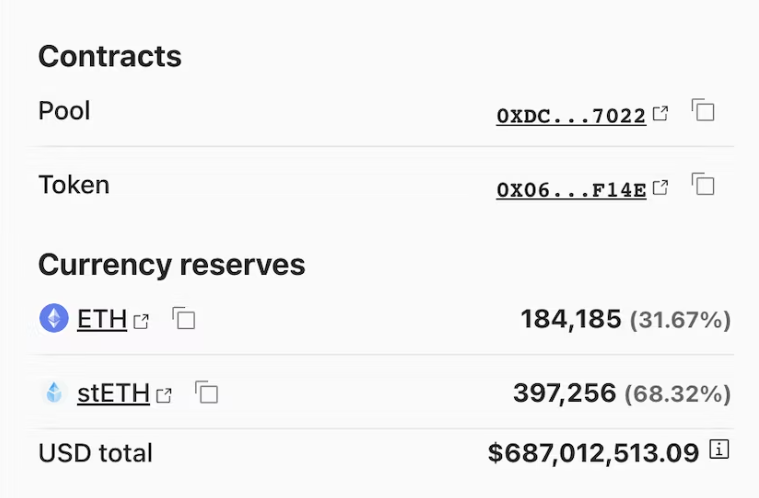 As such, not everyone will be able to exchange their stETH back for ETH. At the moment, using the example of the Curve Finance pool, it can be seen that there are only 184,185 ETH for 397,256 stETH. This means that if someone wants to exchange stETH for the equivalent of 100,000 ETH, the remaining amount of ETH in the pool will be 869,140 stETH for only 84,000 ETH. This has a huge impact on the price.

Even the protocol itself says that when exchanging a large amount of stETH, the impact on the value of stETH will be simply enormous. But in fact, this is the calculation of the exchange of one transaction. In fact, the situation will be much worse, since the real price change is calculated using the above imbalance. 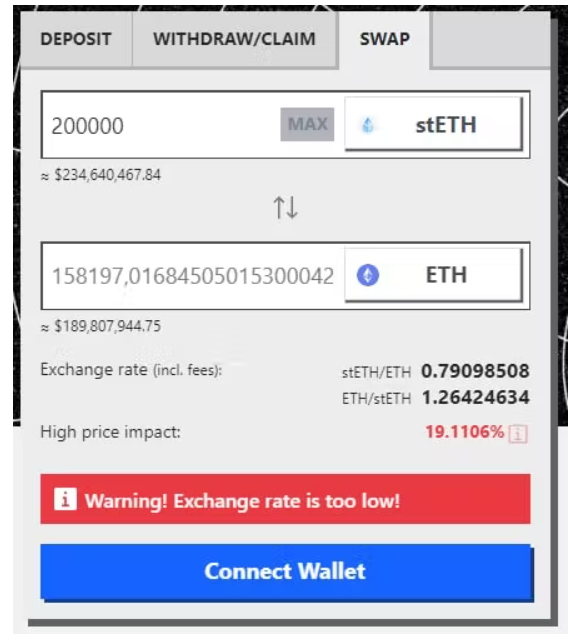 stETH alone has over 120,000 holders, and only 40% will be able to get all their money back, and these are the most optimistic forecasts. Not to mention that the chain reaction will not take long.

According to Dune, the stETH/ETH imbalance on Curve has already reached an alarming 70%/30%.

Later, the rate stabilized, but things could have turned out differently and set off a chain reaction, like with Terra.

Here is what Lido itself writes about the risks of using stETH:

There are a number of potential risks when staking ETH using liquid staking protocols.

There is an inherent risk that Lido may contain a smart contract vulnerability or bug. The Lido code is open source, tested and included in an extensive bug bounty program to minimize this risk.

Lido is built on an experimental technology that is under active development, and there is no guarantee that ETH has been developed without bugs. Any vulnerabilities inherent in ETH entail the risk of contraction as well as the risk of fluctuations in stETH.

The value of stETH is built around the staking rewards associated with the Beacon Ethereum chain. If ETH fails to reach the required adoption rate, we may experience significant fluctuations in the value of ETH and stETH.

The portion of ETH staked through the Lido DAO is held in multiple accounts supported by a multi-signature threshold scheme to minimize the risk of holding. If signers who pass a certain threshold lose their key stakes, get hacked, or become scammed, there is a risk that this part of the funds will be blocked.

ETH validators risk staking penalties, with up to 100% of staked funds at risk if validators fail. To minimize this risk, Lido stakes on several professional and reputable node operators with heterogeneous settings, with the added mitigation of insurance paid from Lido’s fees.

Users risk a stETH exchange price that is below intrinsic value due to Lido withdrawal restrictions, making it impossible to arbitrage and create a full-fledged market.

Lido DAO aims to mitigate the above risks and eliminate them as far as possible. Despite this, they may still exist and therefore we have an obligation to report them.

More than 70% of stETH has been bought above ETH’s $1,425 price, meaning only 18% of stETH participants are in a profitable range, according to analytics firm Nansen. This means that most illiquid players can close their market positions and start a selling wave, as happened with the Terra protocol. Such a situation will definitely arise with the release of the Shanghai update, but it can happen much earlier, in the current macroeconomic situation, any event can trigger the decoupling of stETH, sETH, rETH rates from native ETH, which will lead to a panic sale of assets, to the collapse of the 10 billion Ponzi scheme and loss of funds of about a hundred thousand investors.

stETH currently offers a 5.5% return with all the huge risks described above. At the same time, Lending protocols offer to place ETH at 4% per annum with almost no risks and no problems.

In these protocols, you can withdraw and sell tokens at any time, you just need to monitor the utilization rate. It’s up to investors to decide whether or not to take huge risks for the extra 1.5%, but what most people don’t realize is that that 1.5% is behind another Ponzi scheme that could collapse at any moment.

This is not financial advice.