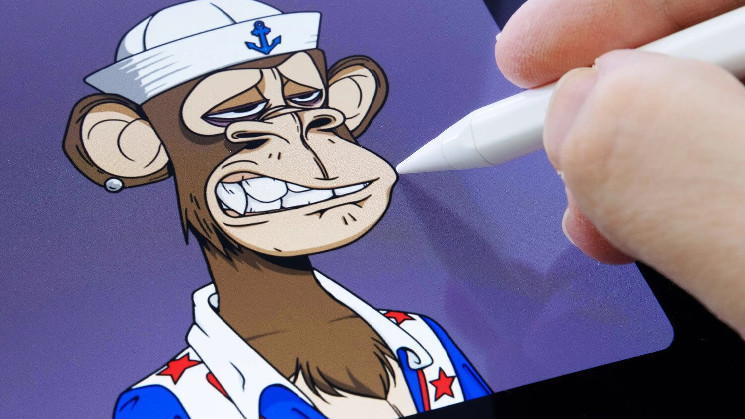 Earlier this year, when the Bored Ape Yacht Club (BAYC) NFT collection was at its peak, Coinbase announced the release of a trilogy of “monkeys on the blockchain” featurettes. The first part was released in July, but now representatives of Coinbase said that the release of the remaining two parts of the trilogy has been postponed indefinitely for the time being. Moreover, all this is happening against the backdrop of a general fall in the crypto market and the fading of interest in the field of unique tokens. Let’s talk about the situation in more detail.

We have clarified the latest data: today Bored Ape Yacht Club is the most popular and expensive NFT collection. The minimum price of its representative is 67.59 ETH or the equivalent of 86 thousand dollars.

Rating of the most popular and expensive NFT tokens

What’s going on with popular NFTs

Here is what the Coinbase speaker said in a recent interview with Decrypt.

We are constantly evolving our content strategy and have decided to put the remaining two films on hold while we figure out the best path for creative development. We will continue to focus on more pressing creative endeavors. 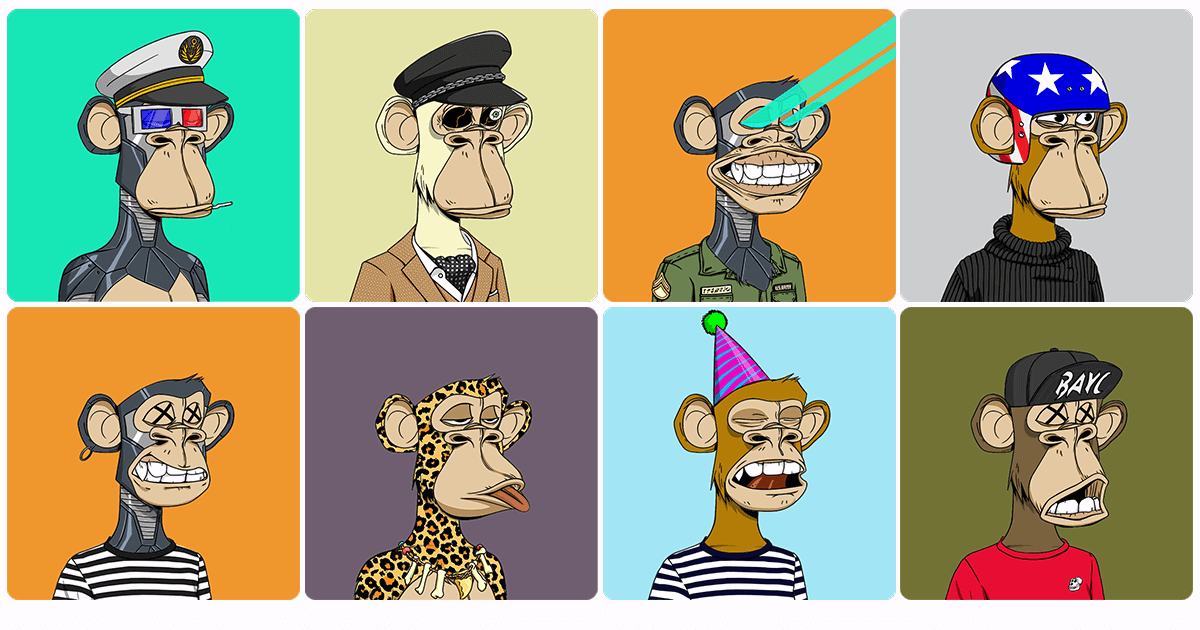 The representative of the exchange did not name the reasons for the suspension of work on the remaining short films. At the same time, it can be assumed here that the demand for everything around the topic of unique tokens has dropped significantly.

However, in general, NFTs still generate significant volumes. For example, over the past month, the volume of transactions with the mentioned Bored Ape Yacht Club collection amounted to 61.7 million dollars, which is the best result among competitors. At the same time, the second place in this rating represented by Mutant Ape Yacht Club is more than two times behind in this indicator. 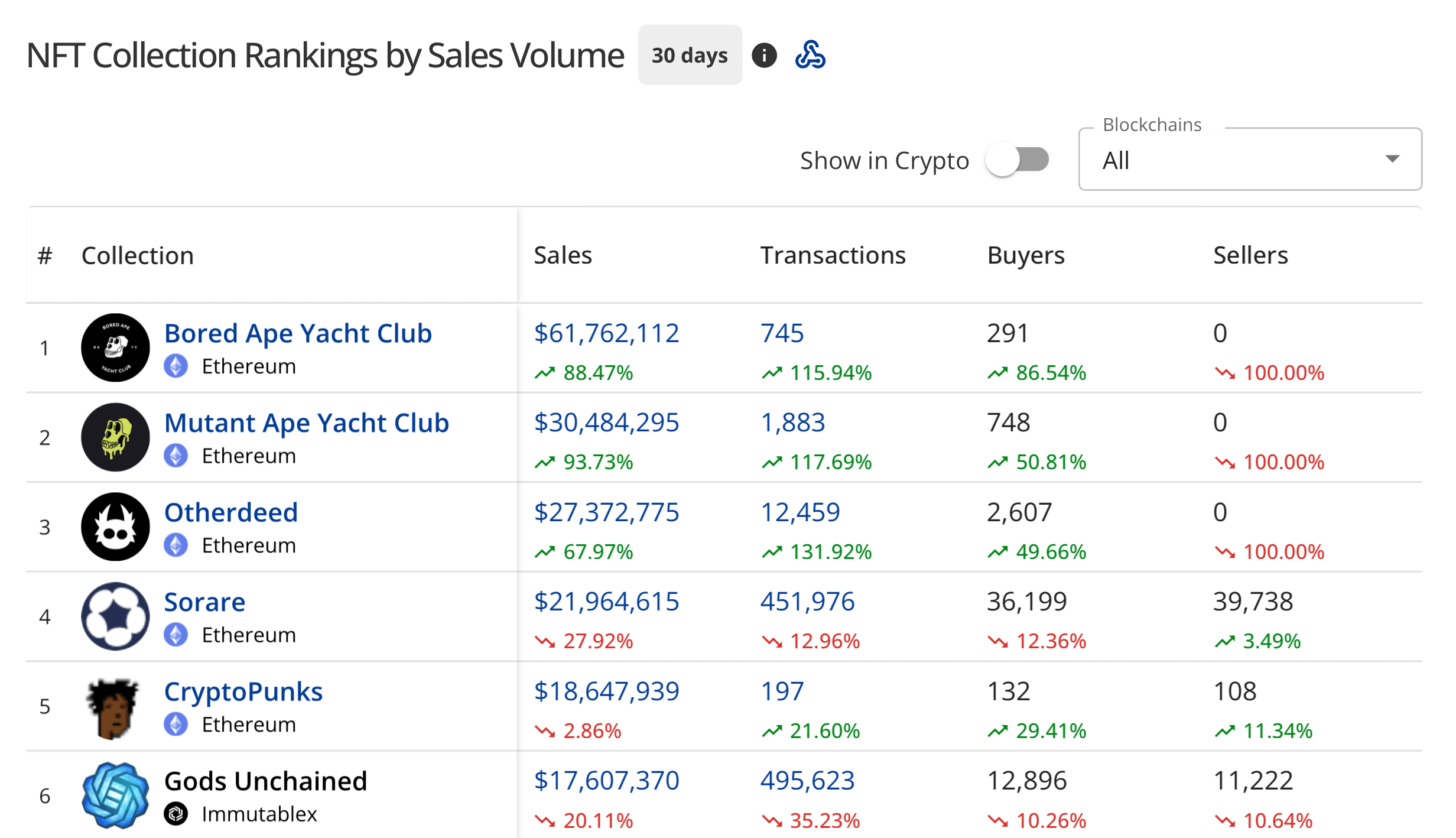 Trading volumes of NFT tokens for the last month

The trilogy itself, called The Degen Trilogy, was also heavily promoted by development studio Yuga Labs, which created an NFT collection. Various monkey characters appear in the shorts and become the faces of several of the series’ most expensive unique tokens. What is most interesting, the management of Yuga Labs promised the owners of these tokens a fee of 10 thousand dollars in Bitcoin or ApeCoin.

The first part of The Degen Trilogy was released in July on YouTube and the company social media pages of both Coinbase and Yuga Labs. The five-minute animated short introduced viewers to human characters on the hunt for ApeCoin in a skyscraper filled with “money zombies”. From time to time, the same monkeys from NFT tokens appeared in the frame.

The video was heavily criticized by the crypto community: commentators on social networks condemned the intricate plot, long credits and the lack of memorable moments. Some also considered the timing of the release of the first part of the trilogy to be unfortunate, as it was launched after Coinbase laid off about 1,100 employees in June.

Well, after the bankruptcy of FTX, crypto fans managed to make a lot of memes with a reference to “bored monkeys”. According to fans of digital assets, the collapse of the exchange may well be the second part of The Degen Trilogy. 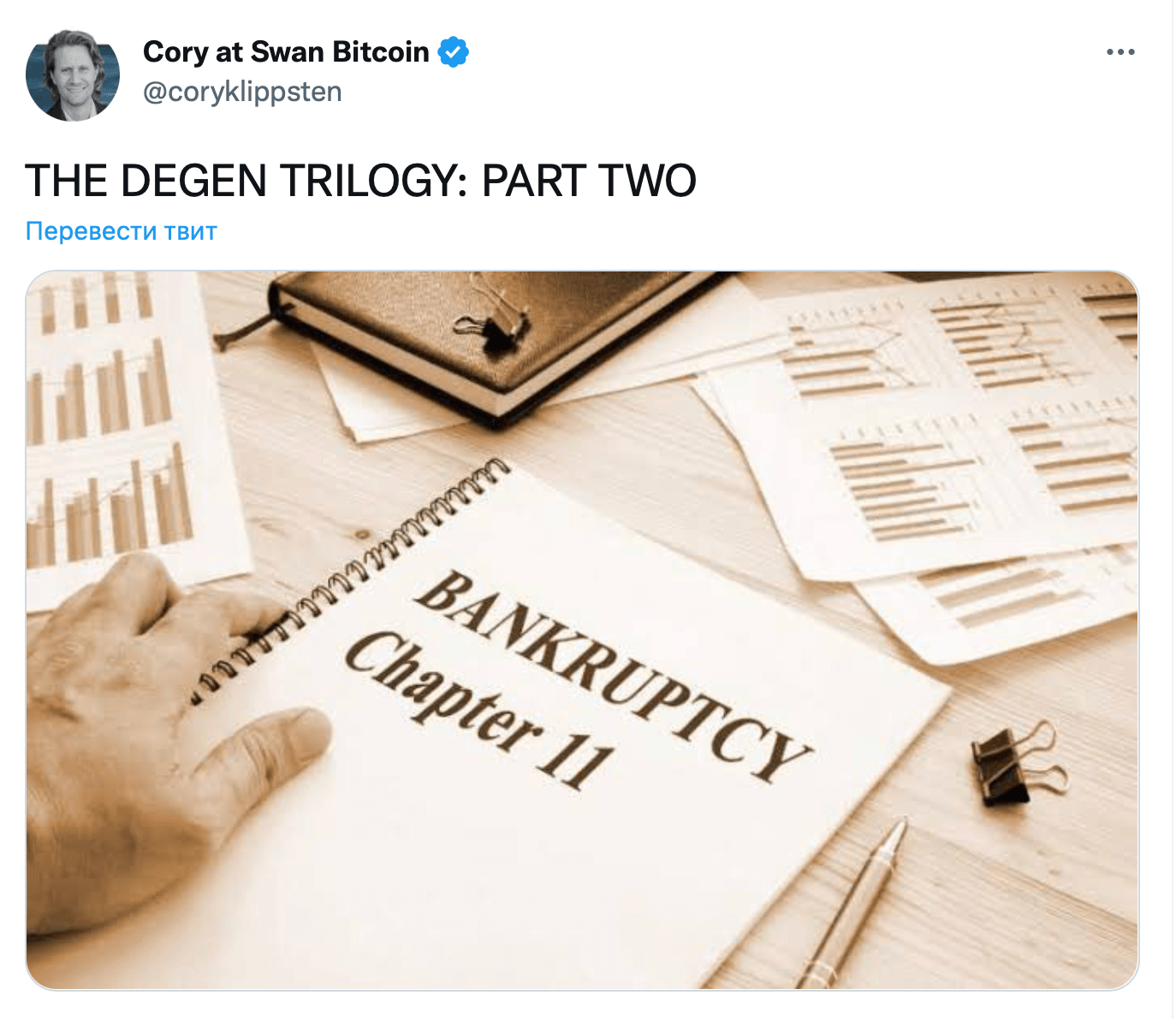 In addition to layoffs at Coinbase, the scene in crypto has changed significantly from the beginning of this year until mid-summer. Back in 2021, NFTs flourished as a crypto market, and unique tokens became the main bullrun trend. Then the investor was shocked: first from the collapse of Terra, then from the bankruptcy of numerous crypto companies, after which in November the industry was surprised by the collapse of one of the largest exchanges, FTX.

According to The Block analysts, in November, the volume of transactions with unique tokens amounted to $643 million. For comparison: in January, the same figure exceeded $5 billion.

Volumes of transactions with NFT tokens

A more intelligible state of affairs is shown by the statistics of Coinbase’s own trading platform for unique tokens. Since its launch in April, it has brought the exchange only $7 million in profits.

Bored Ape Yacht Club is one of the few NFT collections that has managed to maintain its brand value. Although several scandals have been associated with the collection itself in the past. But the trilogy of short films – this does not seem to be the most successful marketing ploy from Coinbase.

Be that as it may, the topic of NFT continues to be relevant for various manufacturers. The latest new initiative to connect with the Bored Ape Yacht Club collection was voiced by representatives of the company Timex, which produces watches.

They decided to launch 500 custom pairs of watches together with the BAYC community. The idea is to display a unique NFT on the watch face, and it can be exclusively Bored Ape Yacht Club or Mutant Ape Yacht Club. 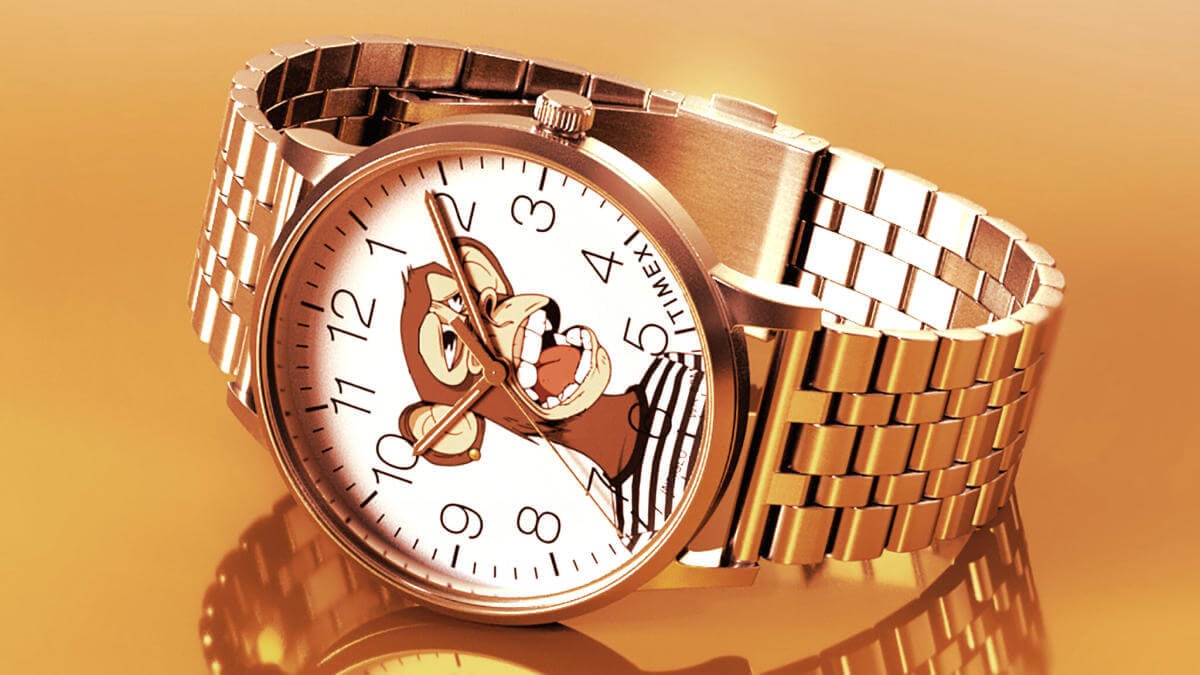 The minting of the corresponding NFT to receive hours cost the participants of the event 2 ETH, that is, the equivalent of 2500-2600 dollars. 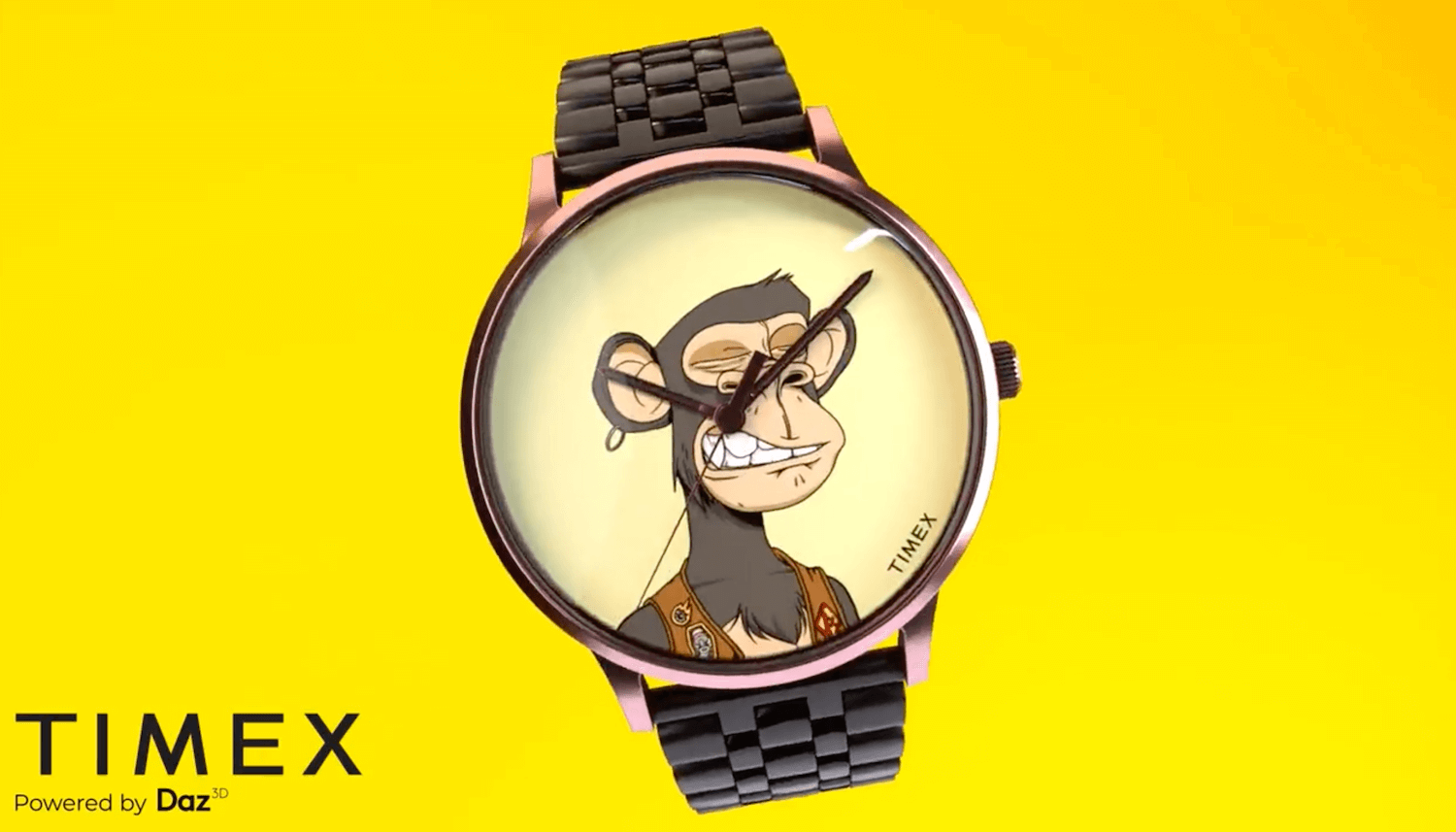