The mechanism for attracting investments: the initial placement of cryptocurrency


With the development of the cryptocurrency industry, various financial instruments for investing and attracting digital funds appear. One of these tools is initial placement of cryptocurrency (Initial Coin Offering, ICO).

This tool allows companies to raise capital for their projects by issuing digital tokens in exchange for cryptocurrencies or fiat currencies. Thus, ICOs can be seen as an alternative to more traditional startup funding sources such as venture capital (VC) and angel funding.

According to the European Commission, companies have different sources of funding depending on the stage of development: 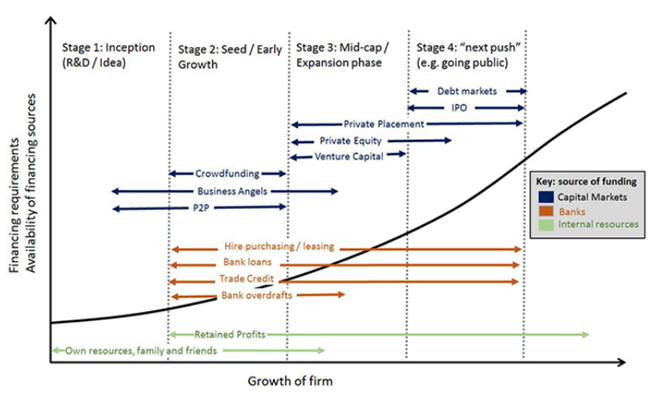 As can be seen in the above graph, from the early stage of development to becoming a public company, different sources of funding are used. The graph shows traditional capital raising mechanisms such as crowdfunding, venture capital investment, bank loans, leasing, initial public offering and others. However, recently, these traditional methods have been added – ICO.

How does an ICO work?

After deciding to conduct an ICO, the company announces in advance the date, rules and process for purchasing a new cryptocurrency. In practice, investors mostly buy new cryptocurrency (tokens) with another cryptocurrency, with Bitcoin (BTC) and Ethereum (ETH) being two common options. There are also ICOs that accept fiat money.

The purchase process usually involves sending money to a specified crypto wallet address. Investors provide their own recipient address to receive the cryptocurrency (tokens) they buy. At the same time, the number of tokens sold during the ICO and the price of the token can be both fixed and variable. Here are examples of how this might work:

• Fixed number of tokens and price: the company pre-sets both of these options, such as offering one million tokens at $1 per token.

How to start an ICO?

At the most basic level, launching your own ICO is creating a cryptocurrency token, setting a date, and creating token sale rules.

However, the most important thing is to provide sufficient information about the company or project for which funds are needed, since the income of investors will depend on the success of the project. In this regard, in the cryptocurrency industry, when conducting an ICO, it is customary to develop the following:

• Market research of other ICOs;

ICOs are often compared to initial public offerings (IPOs). Definitely, the similarity between ICO and IPO is that both mechanisms allow companies to raise funds. However, the main difference between an ICO and an IPO is that an IPO involves the sale of securities and is subject to much stricter rules. A company that wants to conduct an IPO must submit an application for registration to the authorized body of the country/exchange and obtain its approval. The application for registration must include a prospectus containing financial statements and potential risk factors.

Meanwhile, ICO is the sale of a cryptocurrency, not a security. For this reason, it does not have the formal requirements of an IPO. But if a company tries to circumvent the requirements by holding an ICO for something that fits the definition of a security, it could run into legal trouble.

How is ICO regulated in the world?

In the world, ICOs are practically unregulated. In the United States of America, there are no rules that apply specifically to ICOs. However, if an ICO meets the classification of an offering of securities, then it falls under the jurisdiction of the SEC and is governed by federal securities laws.

• Prospectus issuance rules should apply to crypto assets offered to the public, including through ICOs, where the instruments qualify as transferable securities;

• The scope of the Directive on the Prevention of the Use of the Financial System for the Purposes of Money Laundering or Terrorist Financing (AML) should be revised to take into account changes in the market, including in relation to the exchange of cryptocurrencies and financial services for ICOs;

Advantages and disadvantages of ICO

However, ICO has its pros and cons. Let’s take a closer look at the benefits:

• high potential profit. If you buy an issued cryptocurrency at the start, prices are often lower, and some ICOs offer tokens at a discount;

• availability of ICO for everyone. Unlike some IPOs, there are no restrictions on who can invest;

• A fast and efficient way for startups to raise funds.

There are also the following disadvantages of ICO:

• instability of the cryptocurrency project, loss or complete nullification of the value of the token;

• lack of regulation, which leads to more fraud and mediocre projects.

Several examples of major ICOs in recent years should be noted:

• Ethereum: many crypto enthusiasts were excited about Ethereum and its programmable blockchain when its ICO took place in July 2014. It eventually raised $18.4 million and became the second largest cryptocurrency.

• Cardano (CRYPTO:ADA): Cardano outperformed Ethereum and had an even more successful ICO. It raised $62.2 million in January 2017. It will eventually become one of the top five cryptocurrencies by market cap.

• Tezos (CRYPTO:XTZ): Tezos raised $232 million through an ICO in July 2017. However, there have been numerous delays in the distribution of tokens sold through the ICO, leading to a class action lawsuit. In 2020, Tezos reached a $25 million settlement with all parties.

• Dragon Coins (CRYPTO:DRG): there have been many failed ICOs, and Dragon Coins is one of the most notorious examples. In March 2018, he raised $320 million. However, a series of disputes led to an almost immediate drop in price and in 2021 its market capitalization fell below $1 million.

Based on the above, it follows that ICO is one of the ways to raise capital for companies by issuing their own cryptocurrency (tokens) in exchange for more common cryptocurrencies such as Bitcoin or Ethereum, or even fiat currencies.

The main advantage of ICO is the absence of strict requirements for the issuance of tokens, which could be presented in the event of the placement of securities through an IPO. However, this advantage can also become a disadvantage, since fraudulent organizations can engage in raising capital and the investor will not have effective tools to protect their interests.

There is still no clear consensus in the world on the recognition of ICOs. Western countries do not prohibit ICO activities and are at the stage of developing relevant regulations. Meanwhile, Asian countries directly prohibit ICO activities, but with the proviso that this ban is temporary. In the Republic of Kazakhstan, the ICO phenomenon is only being studied on the basis of international experience.

In general, we believe ICO is an attractive tool for raising funds at an early stage of startup development. The main clients of ICOs are individuals who have a relatively higher level of risk appetite, while they will also have a higher level of profitability.

The We Legal team will continue to follow and study the ICO and publish reviews of the latest developments in this area.