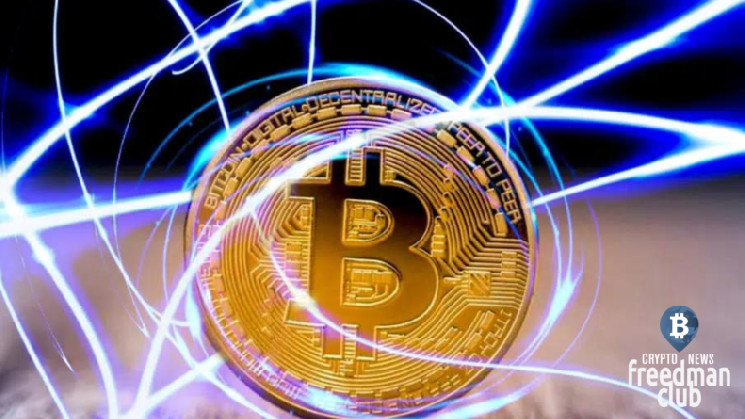 Bitcoin was less volatile and stronger than stock markets in September. The first cryptocurrency continues to consolidate around the $20,000 mark, compressing a spring that will lead to a sharp takeaway in one direction or another. Consider the arguments and forecasts in the direction of such a movement.

The leading cryptocurrency, Bitcoin, is trading sideways, maintaining a tight trading range of $19,000 to $20,000 amid lack of volatility. Bitcoin’s volatility has declined over time as the asset has gained popularity. If we compare the current state of the top cryptocurrency with its early years of adoption, the influx of institutional capital has also contributed to its relative stability.

This makes the asset move more in line with traditional markets. This year’s increase in the correlation between Bitcoin and the US stock market is proof of this.

Bitcoin is stable, while US indices go into the red

For the first time since the 2008 financial crisis, the S&P 500, Dow Jones and Nasdaq Composite ended three straight quarters of losses.

Bitcoin is also in the red band, but it is more stable compared to stocks.

According to data provided by Compound Advisors’ Charlie Bilello, the benchmark S&P 500 is currently falling the longest since March 2009. 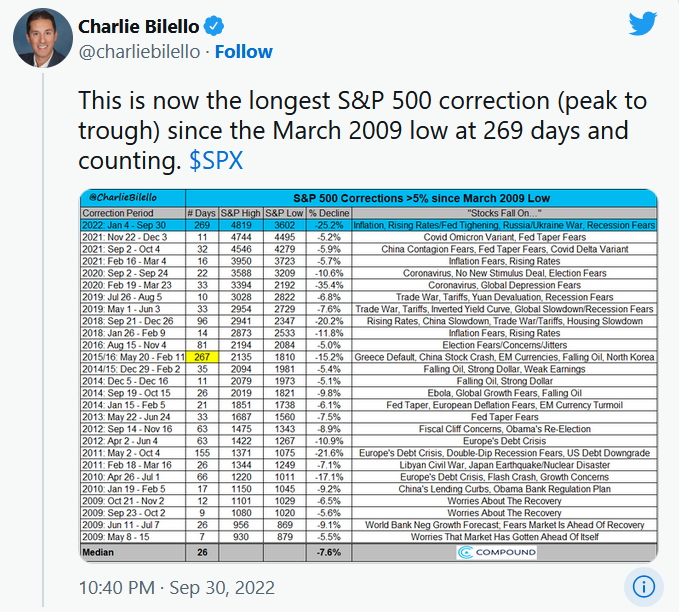 The percentage of retail investors with a negative view of the stock market (according to the American Association of Individual Investors) rose to 60%, the highest level since 2008 and the eighth most dismal reading in the study’s 35-year history.

Why the price of Bitcoin has become less volatile than the price of stocks is a question that many people care about.

Surge in the value of the US dollar

The US dollar is supported today by the same fundamentals that pushed it higher against major currencies for most of the year. In fact, there is nothing that could prevent the dollar from achieving even more growth.

The rise of the US dollar affects other currencies, destroying stock portfolios and crashing commodity prices. However, one asset, Bitcoin, was relatively stable last week. The cryptocurrency surged 6.5%, posting an unexpectedly strong rise that caught the attention of both bulls and bears in the market.

Sven Henrich, founder of research firm NorthmanTrader, tweeted: “You know, we have reached a unique moment in history where Bitcoin has suddenly become less volatile than fiat currencies.”

During the latest bull market, Mr. Henrich was a notable bear, voicing concerns about overvalued assets such as cryptocurrencies.

Bitcoin Under Pressure Amid Higher Inflation

For consumers and the Federal Reserve, a strong currency is a brake on inflation, which is still too high. U.S. Department of Labor data released on Sept. 13 shows annual U.S. inflation at 8.3% for the 12 months ending August 2022, up from 8.5% in July.

The next inflation report will be published on 13 October. 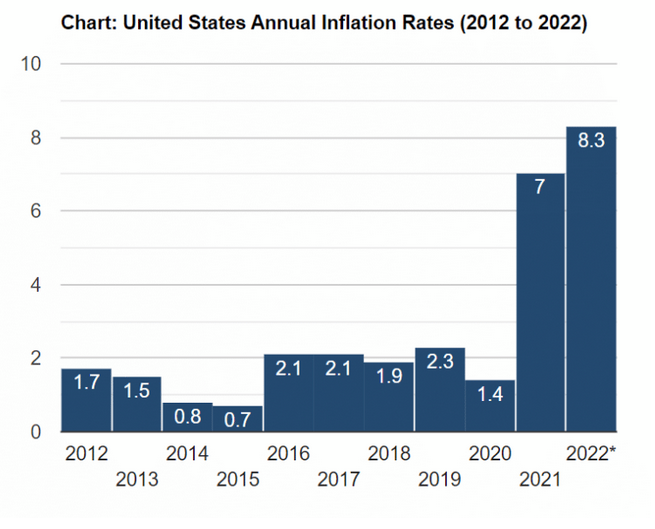 Stronger inflation causes the rate to rise, leading to an uptrend in the US dollar. There is a negative correlation between Bitcoin and the US dollar, the more expensive the dollar, the cheaper Bitcoin.

As interest rates rose due to inflation, Bitcoin followed patterns of trading in riskier assets such as tech stocks. In the last month, this connection has broken. 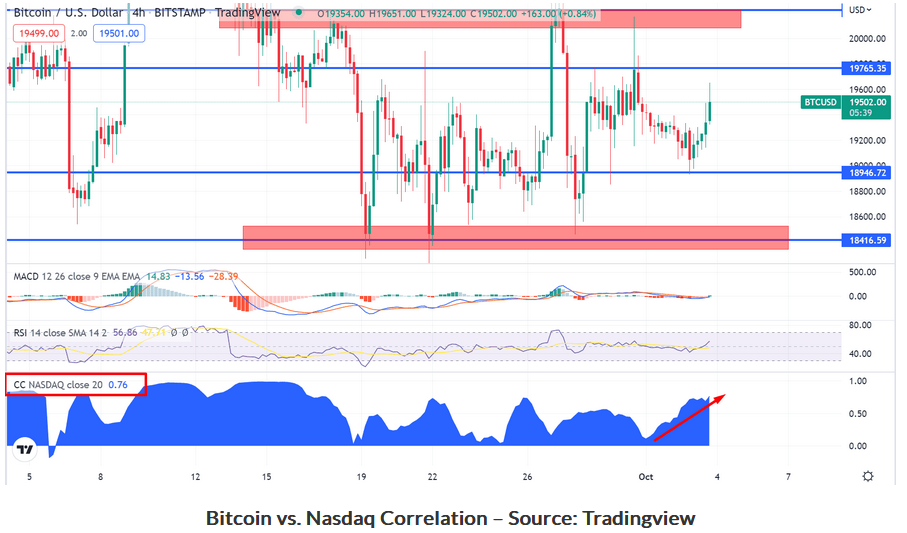 Despite the strong correlation between Bitcoin and the Nasdaq, BTC did not show much movement and traded sideways. The price of Bitcoin rose while the Nasdaq fell by about 10%. As a result of high inflation, stocks are now more volatile than BTC.

In addition, the value of Bitcoin rose in September, rising at the beginning of the month and then falling significantly in the middle due to higher-than-expected inflation reports in the United States.

US interest rate hikes and the Fed’s hawkish policy

Even though Bitcoin has been falling for three quarters in a row, many analysts are surprised by how strong it is right now. Over the past week, as other assets have collapsed, BTC has remained surprisingly stable. The Fed has raised interest rates five times this year.

The Fed is trying to cool the economy to control rising prices. Cryptocurrency has a history of backlash against Fed rate hikes. The last time the Fed raised rates was in September by another 75 basis points. 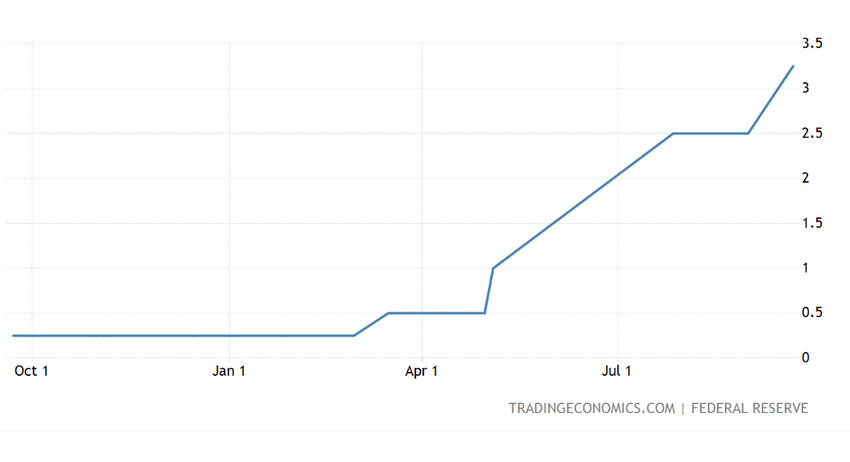 In particular, the stock market crashed last week after the Federal Reserve announced it was raising interest rates for the sixth time this year. This raises the volatility of the stock higher than that of BTC.

As a rule, with the beginning of the fourth quarter, there are expectations of a New Year or Christmas rally in stocks and other risky assets in the market.

The release of more optimistic statistics and a change in expectations regarding the tight policy of the Fed can give impetus to this rally. If it takes place, then Bitcoin, which has shown relative strength against stocks, will be able to demonstrate outpacing dynamics.

What will happen to the price of Bitcoin next

Given all of the above fundamentals, Bitcoin trades volatility amid sentiment and market risk. However, as soon as the US Federal Reserve stops raising interest rates, the cryptocurrency market will return to the growth phase.

Therefore, in order to predict the price of Bitcoin, it is necessary to follow the fundamental indicators of the United States, which can predict changes in the policy of the Fed.