The analyst said in which case the bitcoin rate will drop to an annual minimum of around $17.5 thousand.

At the moment, the price of bitcoin has not been able to choose a trend direction, says Andrey Podolyan, CEO of Cryptorg. As of September 30, 17:15 Moscow time, the first cryptocurrency is trading at $19.5 thousand, over the past day it has risen in price by 3.4%. 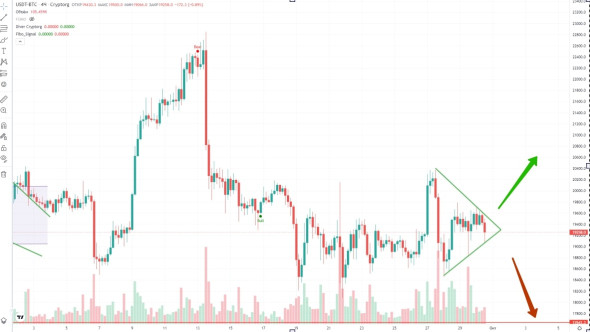 “By the end of the week, BTC was caught in a triangle on the 4-hour timeframe. The next price movement will largely depend on the direction in which the triangle is broken,” the analyst warned.

According to Podolyan, if the upper limit is broken, the next target of the cryptocurrency will be $20.5 thousand. If the asset price goes down, its target will be in the region of the annual minimum of $17.5 thousand, the expert concluded.