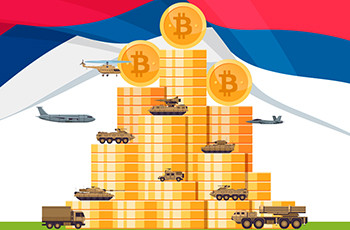 On September 28, the European Commission proposed a new package of sanctions against Russia. Bloomberg, citing its sources, published a list of sanctions, including a possible ban on the provision of services to Russian users by European crypto companies. Without specifying specific details, the authors of the text associate such a step with restrictions on the transfer of Russian capital through cryptocurrencies.

Back in April, the Binance exchange partially limited the functionality for Russian users whose total balance exceeds €10,000, prohibiting them from participating in trading and other services of the site for large amounts. According to a CoinDesk source, new sanctions could bring that figure down to zero. This potentially means that Russians will not be able to hold any assets on crypto wallets of services registered in the EU. The details of the new package of sanctions have not yet been published, since they still have to be agreed upon by all EU member states.

How will sanctions affect

“In fact, behind the scenes, all financial services in Europe have long ceased to serve Russian citizens, with rare exceptions. Therefore, nothing new will happen. This is more of a fashion move on the part of the European Union than a practical one,” comments Nikita Zuborev, senior analyst at the Bestchange.ru aggregator. Based on the text of the next package of sanctions, it may affect services that work with cryptocurrency. However, even before the February events, they practically did not work with the Russians according to their internal rules. On a global scale, European crypto services occupy too small a market share for this to noticeably affect crypto investors from Russia, the expert believes.

According to Zuborev’s observations, large international services are in uncertainty. On the one hand, they do not want to lose a huge potential user base from Russia and Belarus, but on the other hand, in practice they often face the threat of secondary sanctions. The European market for them is no less, if not more promising. Therefore, there is a potential threat of disconnection of Russians from Binance and other exchanges, but how this will look in practice is not yet clear. Those small complications of the registration process or restrictions on disabling direct replenishment from a bank card in some crypto exchanges did not affect the availability of services in Russia, the analyst concludes.

Since crypto wallet operators registered in the EU are required to comply with the Fifth Anti-Money Laundering Directive (5AMLD) and collect user information, they know exactly who their client is. If this is a citizen of the Russian Federation, then after the new sanctions, he will not be able to replenish his crypto wallet at all, explains TerraCrypto founder Nikita Vassev.

In his opinion, possible sanctions are unlikely to somehow affect how the inhabitants of the Russian Federation store crypto assets. “The Russians already preferred to store cryptocurrencies on hardware wallets, and not in virtual wallets, which, in fact, belong to some third party – the operator of this service,” Vassev notes, adding that the ban is likely to affect crypto exchanges popular with Russians, primarily on Binance.

As the most popular trading platform, Binance, which is not headquartered in the EU, introduced similar European restrictions in April, Vassev recalls. In his opinion, with the introduction of new sanctions, the use of a P2P platform from Binance, where they buy and sell cryptocurrency directly without intermediaries, using the exchange as a guarantor of their transaction, may be questionable. It is the P2P service from Binance that has become one of the most popular services where, after the introduction of restrictions on the export of currency abroad, Russians buy cryptocurrencies to withdraw assets.

What’s happening in the market

Referring to the statistics on exchanges in Bestchange.ru, Nikita Zuborev notes that against the background of the announced partial mobilization and mass migration of Russian residents abroad, there was no noticeable increased activity in buying cryptocurrencies. “In general, we did not notice any jump in interest in the last week, although the demand for buying cryptocurrency directly from a card or through payment systems is steadily growing among users. For example, the TOP-2 directions in monitoring are associated with the purchase of bitcoin and together make up about 12% of the traffic of the entire service, ”Zuborev shares the data of the aggregator.

At the same time, traffic has grown significantly after February 24, so some of those interested in alternative finance have already been involved in this activity, the Bestchange.ru analyst adds. In his opinion, probably because of this, “no anomalies were recorded” in the last week, since the level of demand was already overestimated relative to the figures of early February.

Market experts are also talking about an increase in demand for hardware cryptocurrency wallets. Sellers on the Ozon marketplace recorded a threefold increase in device sales after September 21. At the same time, according to experts, the demand for crypto wallets is not as large as it was in March and April. Then the Russians began to buy these devices 5-8 times more often compared to the fourth quarter of 2021.

There is an increase in demand for stablecoins as a tool for withdrawing large amounts of money abroad under the limit of 10,000 euros per person, Nikita Vassev shares his observations. “Since many were in a hurry to sell cars and other property in order to move quickly, they needed a way to get this money out. Someone goes to Raiffeisen Bank and sends a transfer via the SWIFT system, someone buys stablecoins, and then, upon arrival in Georgia, exchanges them back for the local currency,” explains the head of TerraCrypto.

According to Vassev, in many countries where the flow of emigrants is now directed, a pool of exchangers has already been formed that provide services in such areas of currency exchange. Stablecoins are actively sold and bought in the UAE, Georgia, Kazakhstan, the expert notes. Vassev considers it significant that it was during this period in Kazakhstan that a large bank, together with a local crypto exchange, made a deal to buy cryptocurrency for tenge.