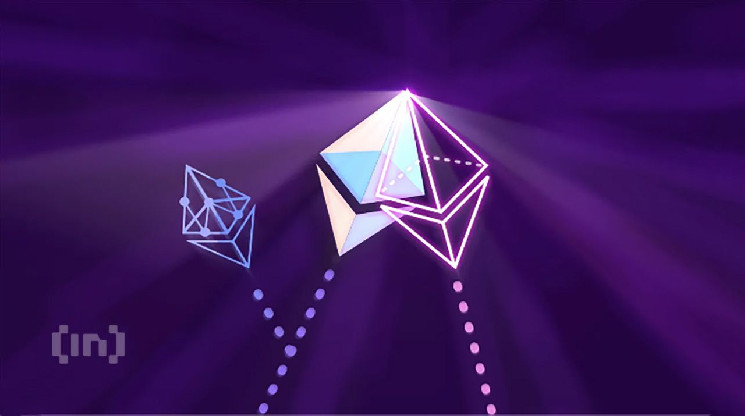 The EthereumPoW (ETHW) rate is approaching the $13.70 area. This is the last line of defense before the important Fibonacci level around $19. Wave analysis promises a successful breakout for the coin

ETHW has its fans

A new PoW fork of Ethereum (ETHPoW) arose as a response of some miners who were dissatisfied with the migration of the Ethereum protocol to a new proof-of-stake algorithm (Proof-of-Stake, PoS). One part of the crypto community immediately doubted the viability of this fork. Others continue to believe in the future of ETHW.

So, on September 26, the coin was added to the listing of the crypto exchange KuCoinand a day later the popular exchange Binance announced the launch of an ETHW mining pool on its platform. The process will be equally available to ASIC and GPU miners. However, unlike KuCoin, Binance is in no hurry to include the coin in its listing. Accordingly, mined ETHW coins can be converted into BUSD tokens, but not vice versa.

ETHW began to rise on September 29, possibly in response to Binance’s recent announcement. The price has broken through the descending resistance line and has strengthened by 26% at the time of writing. Now it has approached the recent high of September 25 at $13.70. A breakthrough in this area could accelerate the pace of growth. 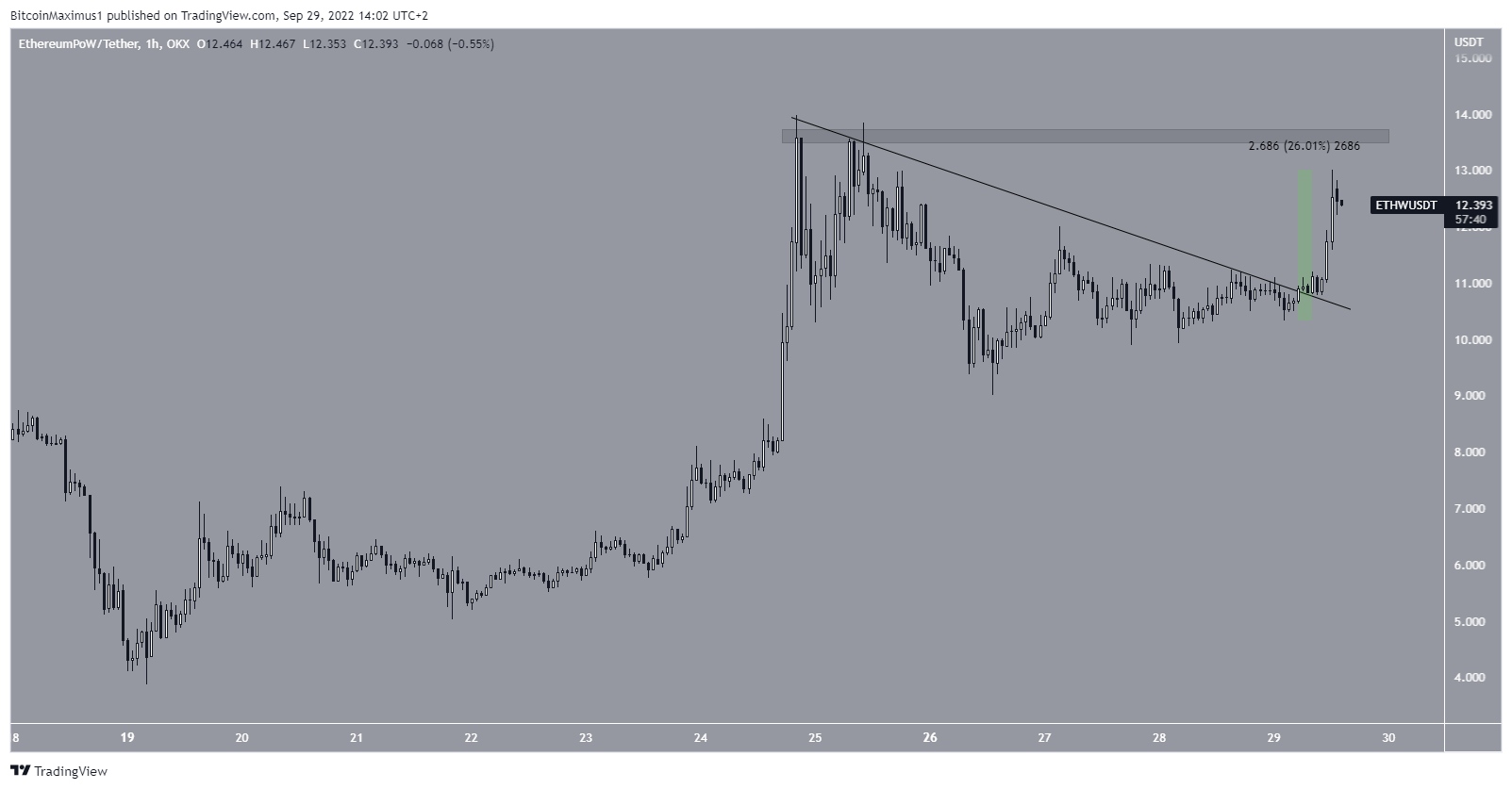 After the Merge upgrade, ETHW began to lose ground sharply and, at the time of writing, dipped 53% from its all-time high of $27.99. At the same time, the price is now rising from the lows of September 19.

The dynamics of this increase suggests that the market has begun the fifth – and final – wave of the bullish price structure. The bounce off the channel previously traded in ETHW and the presence of a symmetrical triangle indicate that the Wave 4 pullback is likely already complete and the coin has now started Wave 5.

The most likely target and top of this move is the area between $17 and $19. This is the Fibo level 1.61 of the outer correction of wave 4 (black) and the length of waves 1 and 3 (white). In addition, the Fibo level 0.618 of the correction of the entire bearish move passes here (red).

Thus, the growth may end inside the convergence area of ​​these Fibonacci levels. 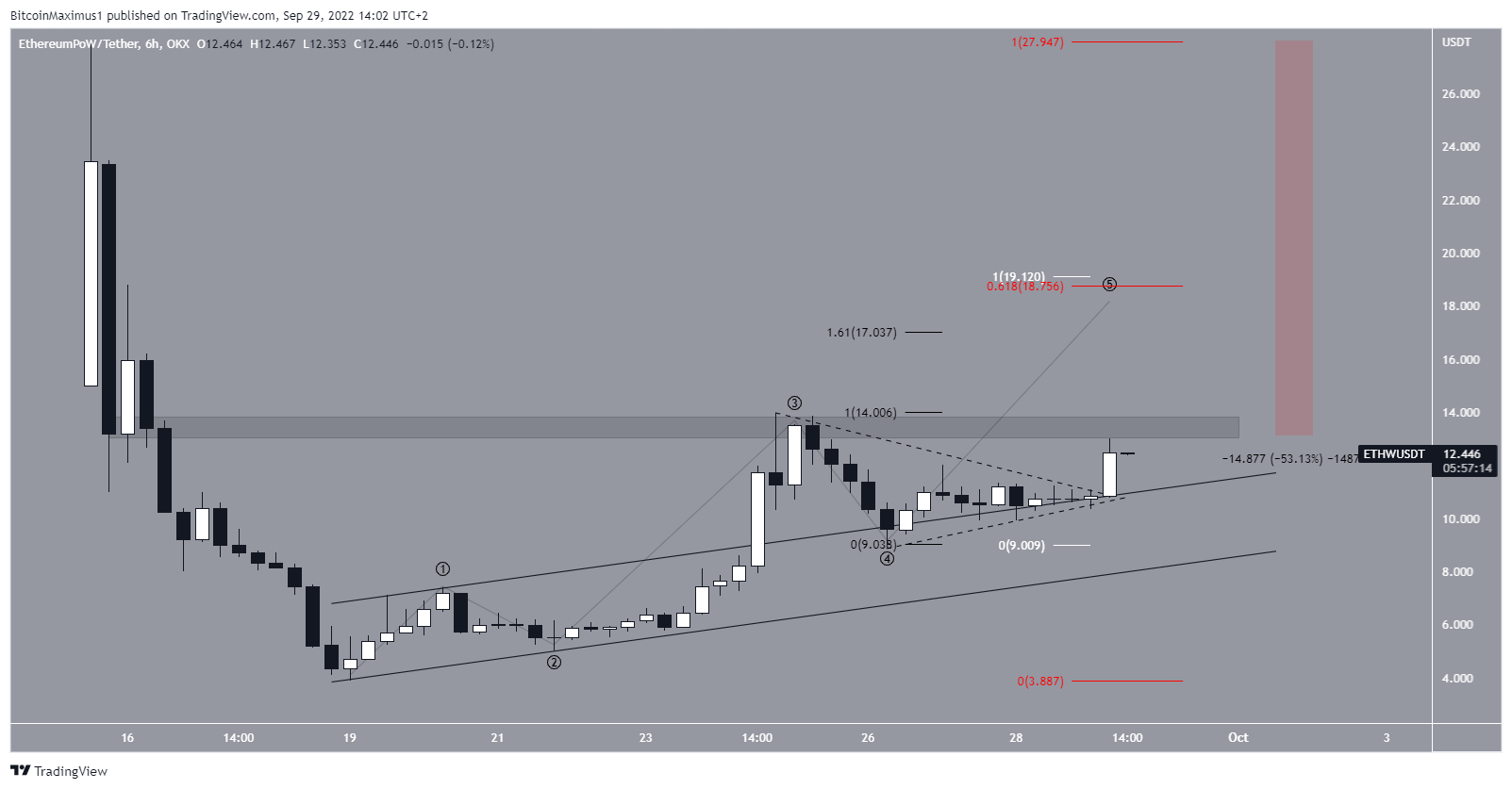 You can read the latest Bitcoin technical analysis here.