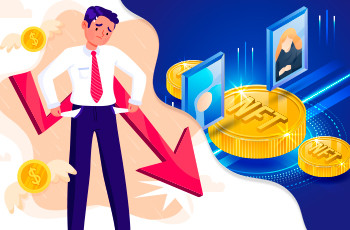 What happened? Since the beginning of 2022, non-fungible token (NFT) trading volumes have fallen by 97%, according to Dune Analytics. From January to September, this figure fell from $17 billion to $466 million. According to Bloomberg, citing a study by an analytical company, this data was collected from NFT marketplaces OpenSea, NFTX, LarvaLabs, LooksRare, SuperRare, Rarible, Foundation.

What else is in the report? In total, about 42,000 NFT traders were recorded in September, with a peak in March, their number reached 66,000. Bloomberg also noted that due to the ongoing crypto winter, the total capitalization of the industry has decreased by about $ 2 trillion.

On September 12, the total number of NFTs issued on the Solana blockchain reached 312,000. On September 4, this figure was only 39,000. Also this month, the marketplace showed the highest level of trading since May – $11.5 million.

Apple also approved the possibility of selling non-fungible tokens in applications that are hosted in the AppStore. However, there will be a 30% fee when selling NFTs through apps.