In a few years, today’s naysayers will say, “Oh, you’re so lucky you got into bitcoin so early.” Save this tweet. This is not financial advice. 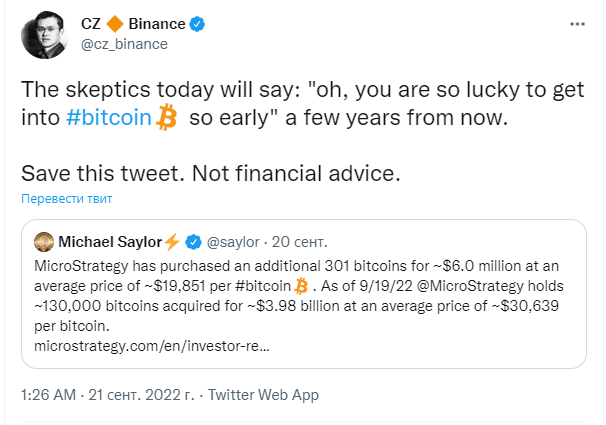 Michael Saylor, executive chairman of business intelligence firm MicroStrategy, recently revealed that his company purchased 301 BTC for approximately $6 million at an average price of $19,851 per coin. With 130,000 BTC as a cryptocurrency reserve, the firm became the only public company to own such a huge amount of coins.

Documents filed with the US Securities and Exchange Commission confirm that the purchase was made between August 2 and September 19.

In addition, a large number of bitcoins are owned by the private and long-closed exchange Mt Gox, which has about 141,686 BTC. In the near future, the remaining coins should be distributed among creditors.

Another private company holding the largest amount of BTC is Block.one. According to Bitcoin Treasury statistics, Block.one currently holds about 140,000 BTC.