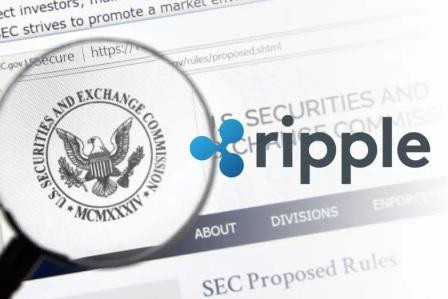 The SEC responded to a request by Ripple and individual defendants to serve subpoenas on two non-parties to verify the authenticity of seven videotapes of public speaking by SEC officials.

The SEC has described Ripple’s request as a “reopening”, adding that it takes no position on Respondent’s claims.

After waiting five days, the panel filed a short response to the Respondents’ request, which reads:

“Plaintiff The Securities and Exchange Commission respectfully takes no position on Defendants’ motion to reopen fact-finding investigations to subpoena third parties to obtain videotapes for authentication.”

#XRPCOMMUNITY #SECGOV AGAINST #RIPPLE #XRP THE SECURITIES AND EXCHANGE COMMISSION SUBMITTED A ONE-LINE RESPONSE TO THE RIPPLE Defendants’ Efforts To Enforce Judge Netburn’s Decision To Authenticate Video Recordings Of SEC OFFICIALS. THE SECURITIES AND EXCHANGE COMMISSION STATED IT WOULD NOT TAKE A POSITION ON RIPPLE’S REQUEST TO RESUME FACT-FINDING. PIC.TWITTER.COM/AXU0XDYHSI

SEC plans to change Ripple request in its favor

Notably, Ripple has stated that its request is not an attempt to rediscover the discovery of facts. The blockchain company and two of its executives noted that the subpoenas they want to serve on a non-party are related to requests for admission (RFA) submitted before the end of discovery.

It’s clear that the SEC wants to label Ripple’s request as “fact discovery reopening” because it also wants to resume fact finding. The commission is also planning to serve its subpoenas for unidentified video recordings, which supports its claim that XRP is a security.

“Specifically, the Securities and Exchange Commission has advised the Defendants that it will only consent if the Defendants agree to reopen the investigation so that the Securities and Exchange Commission can now serve its own set of subpoenas to obtain copies of the unspecified videotapes in support for their claims, and only if the defendants also agree. waive any and all authenticity and procedural objections to unknown SEC videos.” Ripple said.

However, Ripple claims that its request is not to reopen the fact finding, adding that it strongly objects to the SEC’s attempts to do the same.

The blockchain company said that the subpoenas that Ripple intends to serve do not pose a problem for the court schedule.

Commenting on the event, attorney James C. Filan, a former U.S. federal attorney, criticized the SEC’s response as an abuse of litigation and a waste of court time.

« The SEC response is just an abuse of litigation and a waste of court time, oh evidenced by the fact that the SEC waited five days to file a one-sentence response in which the SEC misinterpreted Ripple’s original request.”

The parties want their petition to be sealed

Meanwhile, both the SEC and Ripple jointly filed a request for a briefing scheduled for proposals to seal parts of their response to each other’s proposal to exclude expert testimony.

The parties propose that all briefings and supporting documents relating to petitions for exclusion of expert testimony be kept under seal until Judge Analisa Torres has dealt with this.

#XRPCOMMUNITY #SECGOV AGAINST #RIPPLE #XRP THE PARTIES HAVE REQUESTED A SCHEDULE OF BRIEFINGS FOR PROPOSALS TO CLOSE PARTS OF THEIR RESPONSES TO EACH OTHER’S PROPOSALS TO EXCLUDE EXPERT EVIDENCE. THIS MEANS THAT EVERYTHING WILL BE RECORDED AND REMAIN SEALED UNTIL JUDGE TORRES DISCOVERS. PIC.TWITTER.COM/DA6CAG8CVU