Bitcoin mining difficulty drops for third month in a row

The complexity of bitcoin mining began to plummet as the quotes of the largest cryptocurrency by capitalization fell below $20,000

The Bitcoin (BTC) blockchain network is seeing a decrease in the number of active miners, which is reflected in a gradual decrease in difficulty. According to BTC.com, since May 10, the complexity of bitcoin has been falling with each recalculation, and at the end of July, the values ​​dropped to the level of March this year. 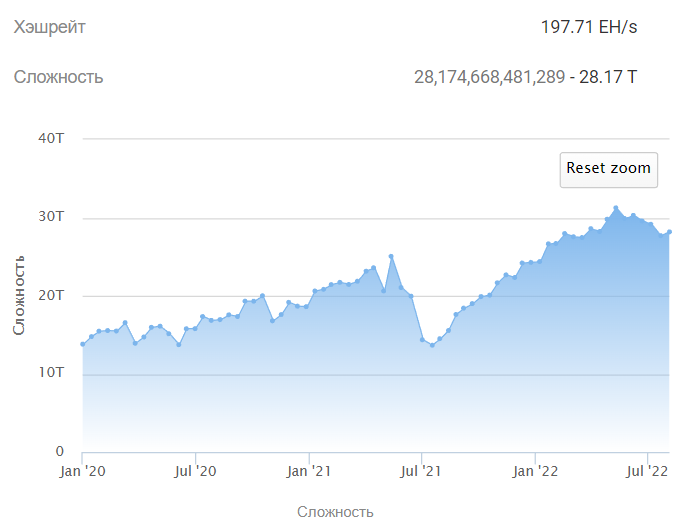 The graph shows that despite the decline, the situation so far does not look as dramatic as when miners moved from China in the summer of 2021. Then it took only a little more than a month to reset the semi-annual capacities. However, it is worth noting that the current decline was the first systematic drop in the difficulty of bitcoin mining since the “cryptocurrency winter” of 2018.

The drop in mining difficulty may be the result of a power outage from the network. Recall that earlier in the media, information has repeatedly appeared about large sales of bitcoin reserves by miners to cover loans.

Read also: What is mining difficulty and why is it needed

In June, the editors wrote that mining centers were under threat of closure, as cryptocurrency miners are having difficulty meeting loan obligations. Ethan Vera, co-founder of mining firm Luxor Technologies, told Bloomberg that many lenders (Bable Finance, Galaxy Digital, bankrupt Celsius Network, BlockFi, Foundry Networks) are worried that they have issued too many loans secured by the mining devices themselves. According to his calculations, in total, firms issued loans for $4 billion.

It remains unclear whether the miners were able to reach a consensus with their creditors. However, the weekly drop in difficulty may signal that bitcoin miners still seem to have to cut back on computing power.