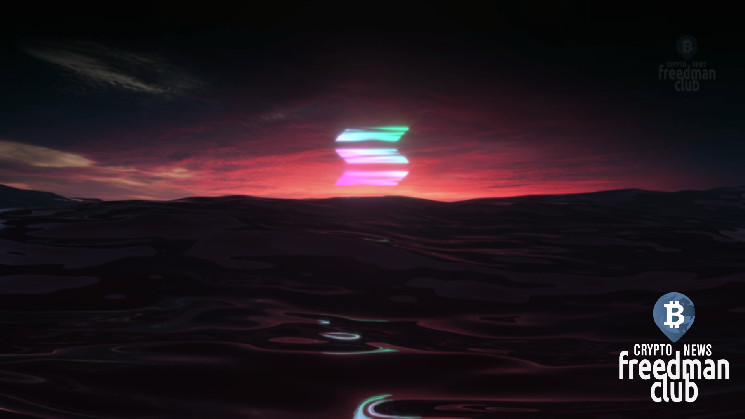 Solana’s problems and its future

Solana faces all sorts of problems and hacks with enviable constancy. Apparently, this is due to the lack of attention to security and reliability issues on the part of developers and the blockchain community, who are concerned about the growth of the ecosystem.

The difference between Solana and Bitcoin Bitcoin maxi are not very nice people. Maxis – short for Maximalists – do not use any blockchain other than Bitcoin, and they are often rude, intolerant, and paranoid. But whatever you say about maxi, they care deeply about Bitcoin and will do anything to protect it. If only other blockchain communities were a bit like them.

Solana, in particular, could learn a thing or two from Maxi. Since entering the crypto scene in 2020, Solana has been regarded by many as the third most important blockchain, thanks to its top 10 market cap and active community of developers and entrepreneurs. But what Solana lacks is security or reliability, two things that Bitcoin has in abundance.

Solana was in the news this week for a hack that drained funds from over 8,000 token holders, and it was apparently caused by a wallet called Slope that stored users’ private keys in plain text on a centralized server. The Slope hack comes just months after another disastrous attack in which hackers stole $320 million from a so-called bridge that allowed users to interact with the Ethereum blockchain.

Solana’s defenders are quick to point out that the blame for the hacks lies with external applications, not the underlying blockchain protocol. This is correct, but also raises the question of why the Solana ecosystem is generally so vulnerable to such large-scale attacks. Can’t the community do more to keep the Solana infrastructure from being riddled with vulnerabilities? Can’t they improve the protocol’s interoperability with third parties, or do more to promote bug bounties and other security measures?

The reason for Solana’s problems may lie in her culture. When asked how the Solana community differs from the Bitcoin community, the most common response was that Solana is heavily influenced by venture capitalists. If this is true, then it helps explain why Solana has become a major player in crypto so quickly and attracted so much attention. On the one hand, this is not bad – hype and growth are necessary for any successful crypto project. But the influence of venture capital could also explain some of Solana’s shortcomings, in particular its disregard for security and its drive to grow at any cost.

Solana also differs from Bitcoin when it comes to maintaining the core protocol. The communities around the latest blockchains are very attentive to every update and potential vulnerability in their chain code. Solana followers, by contrast, talk about a new retail store in a swanky New York mall, but are less concerned with core operations. This may be why Solana has suffered a series of outages in recent months.

Solana’s speed and its community’s focus on building popular products that are easy to use has made it one of the popular blockchains in recent years. But if Solana does not begin to pay attention to the basics, in particular security, she may have serious problems. Bitcoin maxi can be a nuisance, but there is no doubt that their blockchain will still be around a decade from now. What can not be said about Solana.

Solana is one of the worst blockchains Solana is the largest Proof-of-stake blockchain network. Thanks to the unique Proof-of-history protocol, the Solana blockchain can hypothetically process about 100,000 transactions per second. Thanks to efficient network transactions, Solana’s native token Sol ranks 9th in terms of capitalization.

Defi Safety has listed these crypto projects in terms of number of nodes and variety, supporting software, documentation, and testing and security to provide a more accurate ranking level.

On the Defi Safety ranking list, Axie Infinity’s “Play-to-Earn” project is the worst project due to a March hack on its Ronin network that resulted in a loss of about $600 million.

According to the rating agency, Solana is the second worst blockchain network.

‘2/28 First, Solana has a low base score. Despite a public software repository and some good documentation, their node-related infrastructure is poor.’, DeFiSafety (@DefiSafety) tweeted June 7, 2022.

The blog post also notes that Solan’s base score is less significant due to other reasons, which include incorrect handling of archive node information, poorly designed block explorers, and unaudited node clients (software) with less diversity than competing blockchains.

More importantly, the ratings agency raised concerns about archiving Solana’s nodes, or you could say the process of storing all blockchain data since its inception, in order to understand how it works.

“4/28 It is still unclear where the network keeps its history – there have been no documented updates to the Solana bridge since the abandoned archives. https://t.co/g9fW2Lvsfc,” points out DeFiSafety (@DefiSafety) June 7, 2022 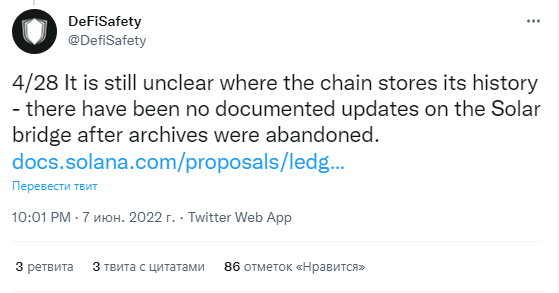 The rating agency also noted that about a year ago, Solana co-founder Anatoly Yakovenko spoke about this in a Reddit thread. Additionally, Solana co-founder Austin Federa, Solana’s head of communications, shared his thoughts on the matter with Decrypt and stated that such things are not important to Solana’s blockchain.

“Solana doesn’t need knowledge of the entire history of the network to validate a block.”

The Solana blockchain has the backing of venture investors and can invest heavily in its development. But security and reliability issues seem to be of no concern to anyone. Sooner or later, this will lead to irreversible consequences. The rise in crashes and hacks will one day undermine user confidence.