how Ethereum will change with the transition to Proof of Stake

In 2022, the largest update of the Ethereum blockchain will take place, for which developers have been preparing for 7 years. In the material we will tell you the main thing that those who use cryptocurrencies need to know about it. We will explain in simple terms what will change in the blockchain. You will also learn how The Merge update will affect traders, miners and ETH coin holders.

What was before The Merge

Since the launch of the Ethereum blockchain in 2015, its security has been ensured by miners. With the help of computing equipment, they solve cryptographic problems and create new blocks. This protection method is called Proof of Work and is used, for example, in Bitcoin. However, this algorithm has drawbacks, for which Ethereum developers release updates to solve.

Ethereum co-founder Vitalik Buterin also considered another consensus algorithm, Proof of Stake, as an alternative to Proof of Work. In 2014, a year before blockchain was launched, he blogged about several important differences:

The main difference between Proof of Work and Proof of Stake is the requirements for creating new blocks.

However, the Proof of Stake consensus algorithm at the time of the launch of Ethereum was still not well understood. There were unresolved issues, such as “nothing at stake”. Therefore, Ethereum began its work on Proof of Work, and the developers divided the transition to Proof of Stake into phased updates. The last of these will be The Merge.

What will happen during The Merge

To ensure a safe transition to Proof of Stake, Ethereum developers have been testing and implementing new features for 7 years. In 2022, this process is at its final stage, and by the autumn it is planned to carry out the final update – The Merge (“merger”).

Earlier, in 2020, developers have already launched a network on Proof of Stake – Beacon Chain. It works simultaneously with the Ethereum Mainnet, but is not connected to it in any way. After The Merge update, both networks will become a single blockchain and the Proof of Stake consensus algorithm will work for all users. This is the essence of “fusion”.

To better understand the meaning of The Merge update, imagine Ethereum as a spaceship that is already launched, but not yet ready for interstellar travel. And Beacon Chain is a new, improved engine built on Earth. Now, after all the tests, it is necessary to replace the old engine with a new one during the flight. As in this analogy, The Merge update will take place in such a way as not to stop the operation of the blockchain.

The approximate date for updating The Merge is given on the official Ethereum website – the 3rd or 4th quarter of 2022. Ethereum co-founder Vitalik Buterin at the Eth Shanghai summit called August the most likely date. However, he allowed the “merger” to be postponed to September or October in case of “potential risks”.

What happens after The Merge

Ethereum’s transition from Proof of Work to Proof of Stake is the biggest upgrade in the history of the project. It will affect almost all participants in the crypto industry. Let’s see what the consequences are.

Any funds held in Ethereum user wallets prior to The Merge will remain available after. No action is required to update. This is important to remember, as the developers themselves warn about possible cases of fraud. Attackers may offer to “upgrade to ETH2” to steal funds.

Also, Ethereum users should not expect lower fees and faster transactions. The Merge update will not increase network bandwidth, but will only lay the foundation for further improvements in this direction. So, in 2023-2024, a multi-stage Sharding update (“Shard Chains”) will take place, which will improve the scalability of Ethereum. 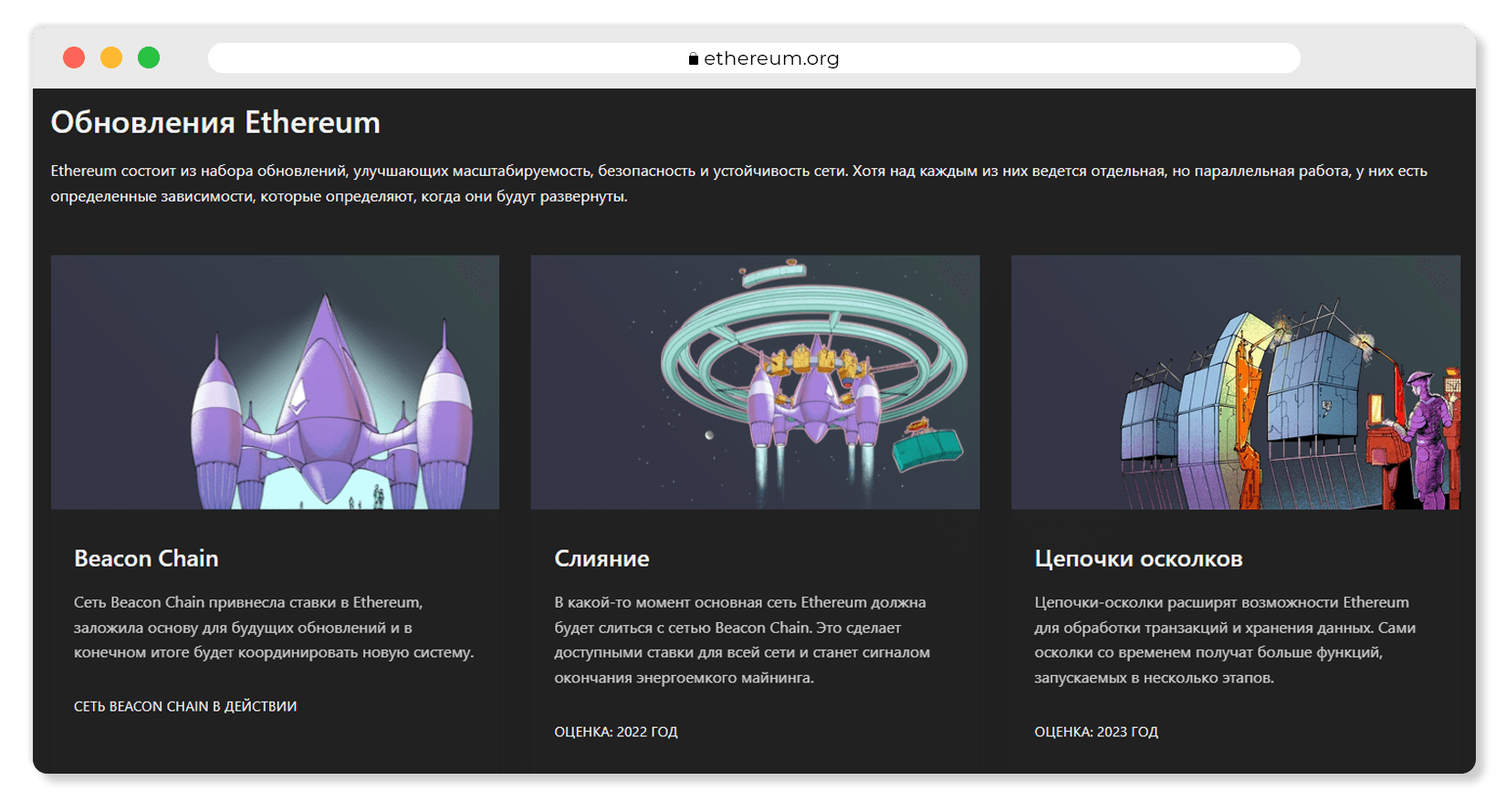 All Ethereum updates are divided into three main stages

The Merge update will hit miners the hardest. In fact, the system will no longer need their computing power. Validators will create new blocks – users who block their cryptocurrency on special accounts and receive a percentage income for this. This process is called staking and is described in more detail in our article on different consensus algorithms.

Traders should also pay attention to the upcoming update. Since the coins will be frozen for staking, there will be less of them in circulation and the rate may rise. In economics, this principle is called deflation. As of early August 2022, there are already 13.1 million ETH staking in the Beacon Chain network. This represents over 10% of the total ETH.

In addition to the amount of ETH in staking, many other indicators also affect the cryptocurrency rate: the number of coins burned, the number of active validators, and even the news background. It is important to analyze many factors in order to form your own trading strategy. You can learn more about the difficulties and mistakes that novice traders face in our interview with trader Ekaterina Kostevich.

In 2022, the largest update in the Ethereum blockchain called The Merge will take place. The Proof of Work consensus algorithm will replace Proof of Stake, which is more environmentally friendly and decentralized.

The essence of the update is to combine the main Ethereum network with the Beacon Chain network, launched in 2020. According to project co-founder Vitalik Buterin, the event will take place in August 2022, but may be rescheduled to September or October.

Holders of the ETH cryptocurrency and other tokens on the Ethereum blockchain will not need to take any action to update. And Ethereum miners will be forced to become validators or start “mining” another cryptocurrency.

The Merge will not reduce fees or speed up transactions, as work on these improvements is only scheduled for 2023. However, the ETH cryptocurrency exchange rate may change due to the deflation process.