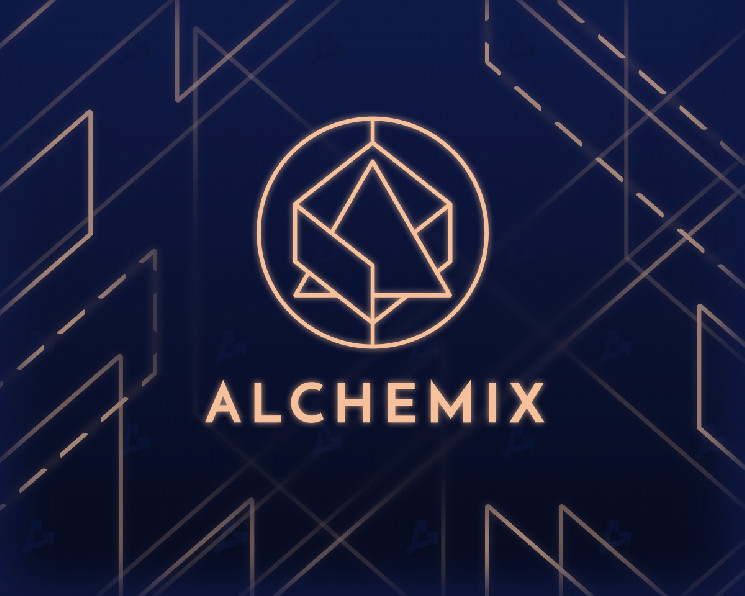 How the Alchemix Landing Protocol Drives the Growth of DeFi 2.0

As well as DEX, landing services are one of the cornerstones of the DeFi segment. With relatively simple interfaces, they allow hodlers to earn interest income and borrow funds secured by digital assets in a few clicks.

The segment has long been dominated by projects such as MakerDAO, Aave, and Compound. Them TVL are $15.15 billion, $13.59 billion and $6.64 billion respectively (as of 04/10/2022). The Anchor protocol from the Terra ecosystem is also gaining momentum. His TVL has already exceeded $15 billion.

Landing projects of the DeFi 2.0 concept like Alchemix are gradually gaining popularity, where debt obligations are self-repaying and are not subject to liquidations.

Any landing protocol has digital asset supply pools and leveraged pools. Each of them contains a certain set of coins.

For example, the Loan-to-Value (LTV) parameter for WBTC wrapped Bitcoin on the Aave platform on the Ethereum network is 70%. This means that if the amount of collateral is $10,000, then the user can borrow WBTC worth no more than $7,000. 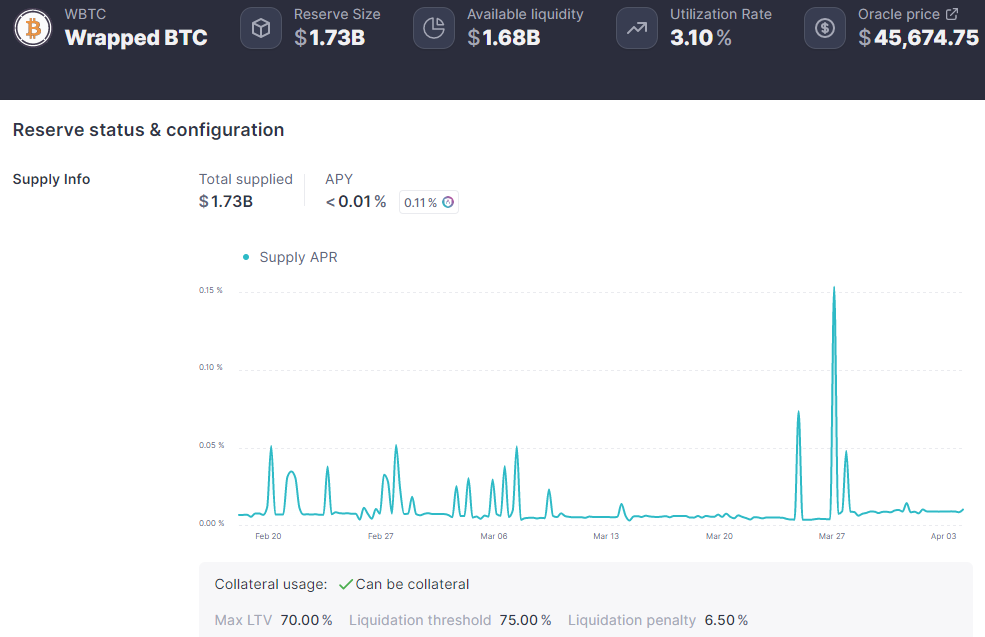 Redundant collateral is the main difference between permissionless protocols and traditional financial market products based on fractional reservation and key.

Another key aspect of landing protocols is liquidations. If the value of the collateral falls below a certain level, the user’s collateral assets will be forcibly sold.

Alchemix is ​​a relatively new landing protocol with some specific features.

“Alchemix self-repaying loans allow the use of a range of tokens without the risk of liquidation,” the project’s website states.

To avoid the risk of liquidation, loans in synthetic versions of collateral assets allow. For example, a user deposits collateral in ETH or DAI, and releases assets tied to them – alETH and alUSD, respectively.

If coin prices go down, then both the value of collateral and borrowings go down. However, this does not negatively affect the debt positions of users and does not affect the LTV parameter.

This is the key difference between Alchemix and classic lending protocols, where volatile assets like ETH are usually deposited, and borrowed in stablecoins (when the value of collateral in Ethereum falls, the loan amount in stablecoins remains unchanged, making the debt position risky).

The platform interacts with the yEarn Finance protocol created by Andre Cronje. Through this integration, users receive income on the collateral assets they deposit.

for example, the user contributes DAI to Alchemix. Stablecoins immediately start earning income thanks to the use of one of the yEarn Finance strategies. On the security of invested funds, the user can borrow alUSD, the native stablecoin of the protocol. 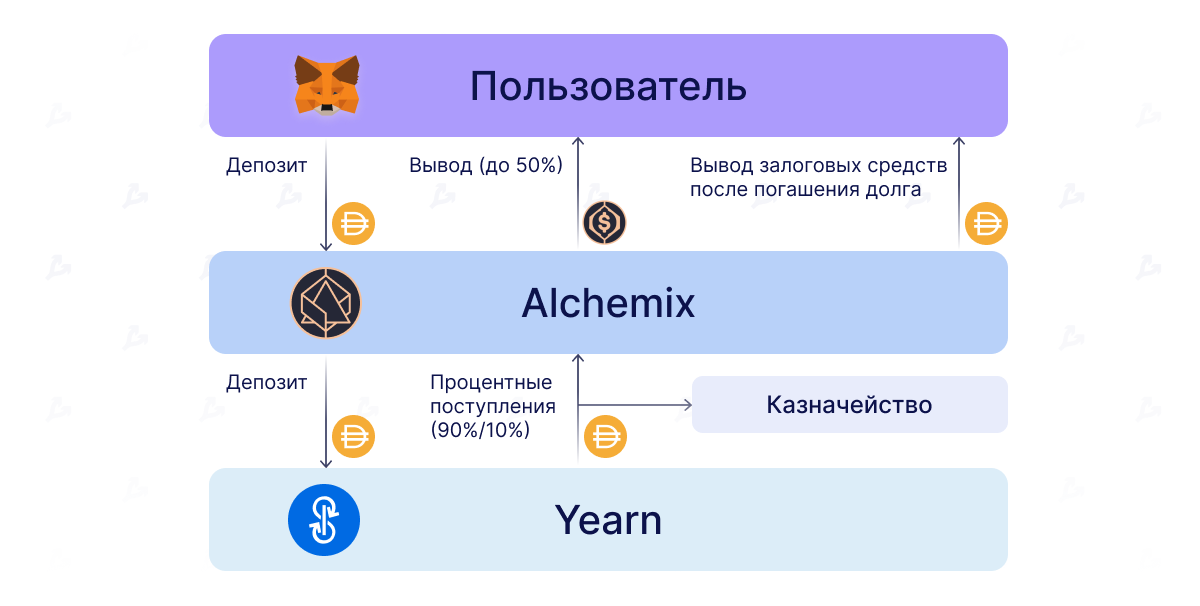 Scheme of user interaction with the Alchemix protocol.

The interest income generated by the yEarn vault gradually repays the user’s loan. This approach is more efficient because it allows you to get more borrowed funds and minimizes the risks of liquidations.

Users can liquidate the collateral or part of it at any time to instantly pay off the debt denominated in alUSD. Partial liquidation of a position can be useful if the user urgently needs collateral assets, but there is no way to fully return the borrowed funds.

You can repay the loan either with a synthetic stablecoin or with the more familiar DAI, USDC or USDT.

At the time of writing, the yEarn Vault yield for the DAI stablecoin is only 2.53%. The strategy involves interaction with the Compound and Curve platforms for farming COMP and CRV tokens. The generated coins are sold for DAI, which are subsequently deposited back into the Vault.

10% of the revenue generated goes to the treasury of the decentralized autonomous organization Alchemix. These funds are used to pay developers, fund various community initiatives, for periodic audits, etc. The remaining 90% is used to pay off users’ debt positions.

To maintain the stability of the alUSD exchange rate, an arbitrage system similar to Terra is used.

Let’s assume that 1 alUSD is worth less than 1 DAI. An arbitrageur can buy synthetic stablecoins from Alchemix at a discount on one of the exchanges, and then profitably exchange them for an equivalent amount of DAI to pay off the debt in his vault.

If 1 alUSD is worth more than 1 DAI, the asset can be issued at a discount to the market price and then sold.

The platform has a Transmuter tool. Thanks to it, the conversion of WETH and stablecoins to synthetic assets and back is available in a 1:1 ratio. For example, it is possible to exchange borrowed alUSD for DAI and then use the latter in third-party DeFi protocols to maximize returns on capital.

Transmuter is the second version of the Alchemix protocol.

Alchemix has a native ALCX token. It is used in protocol management voting. The token can also be used in staking or in the WETH/ALCX liquidity pool on SushiSwap.

The chart below shows that in March 2021, shortly after the launch of the project, the ALCX rate briefly crossed the $2,000 mark. Subsequently, the price of the asset went into free fall. 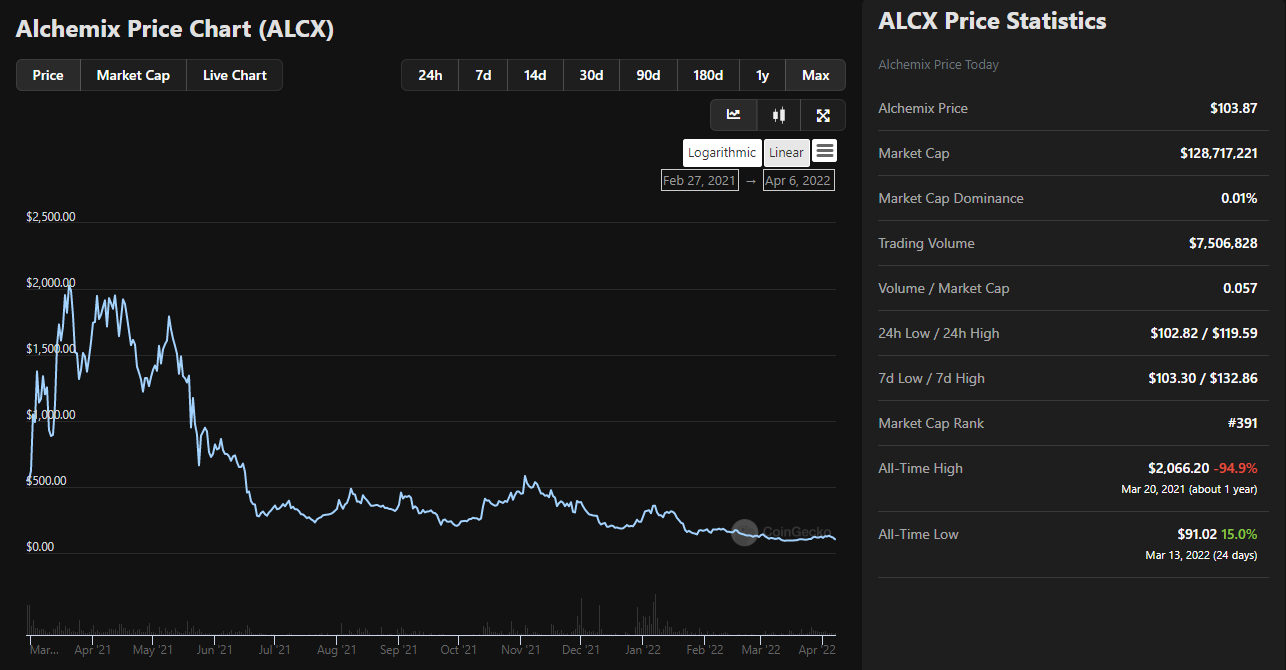 ALCX, ETH and synthetic versions of these assets can also be farmed.

Pools of the Farming section of the second version of Alchemix.

Alchemix 2.0 and the future of the project

The launch of the first version of Alchemix took place in February 2021. At first, there were only two Vaults on the platform – for DAI/alUSD and ETH/alETH. 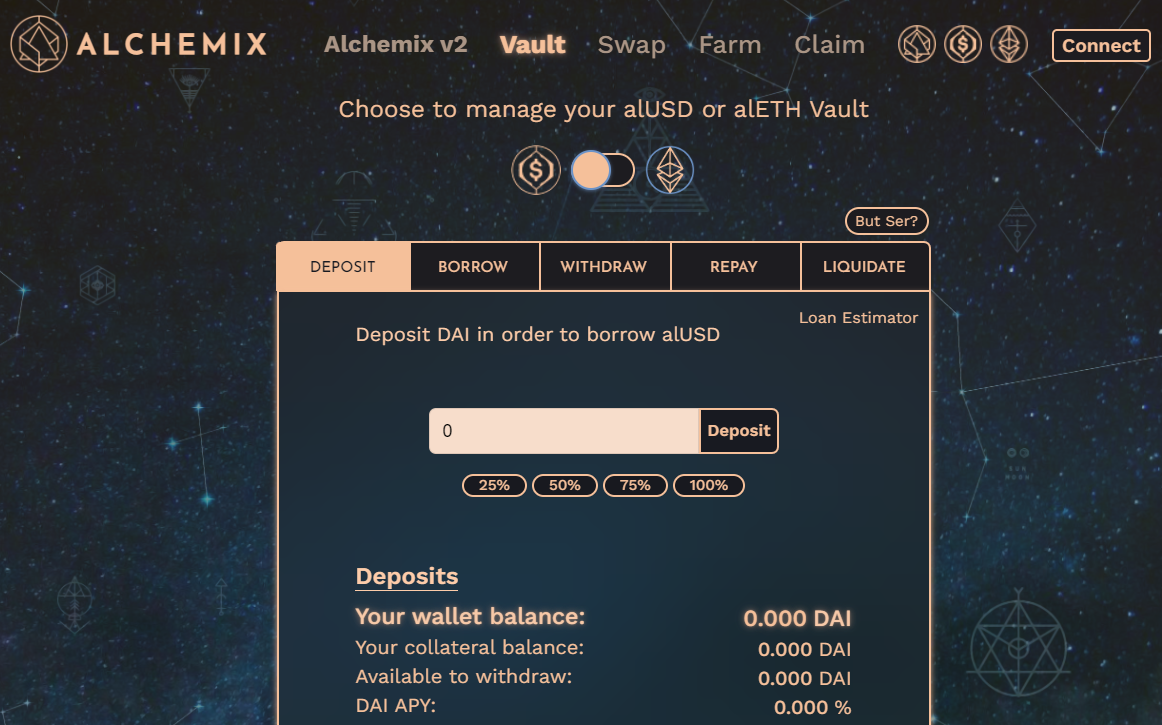 With the launch of the second version in March 2022, the Alchemix interface has changed, and the capabilities of the platform have significantly expanded.

Vaults in the second version of the protocol. Data: Alchemix.

Vaults appeared based on the popular centralized stablecoins USDC and USDT, as well as on the basis of the “wrapped” ether from Lido (wstETH) and rETH of the Rocket Pool protocol.

In accordance with the new assets, the capabilities of Transmuter have also expanded, the Farms section has changed.

We are initially launching with @iearnfinance as our yield provider, but will soon have strategies that can hook into yield sources from @AaveAave and @compoundfinance and other protocols that share their token standards.

More strategies and collateral types will be added over time to Alchemix v2. It is our goal to have our yield sources capture the best yields in DeFi for our users.

Scoopy Troops also called the second version of the protocol more secure than the first.

Alchemix has an interesting value proposition – the developers have radically revised their approaches to non-custodial lending.

Through interaction with the yield aggregator yEarn and the use of synthetic assets, user collateral is used efficiently. Debt positions are virtually immune to liquidations and are automatically serviced by future interest income.

Among the shortcomings of the platform, one can note the low (at the time of writing) profitability of yEarn strategies. It also lacks support for next generation networks like Fantom and Avalanche with their fast and low cost transactions. However, it is highly likely that these problems will be resolved soon, given the optimistic statements of the developers and the growing popularity of cross-chain solutions.

In the future, we can expect the emergence of no less original approaches within the framework of the DeFi 2.0 concept and new solutions that motivate users to actively participate in decentralized ecosystems.