“Ethereum price will triple in a year.” Why updating a cryptocurrency will lead to its rise in price

The long-awaited Ethereum 2.0 update will improve security and increase throughput by making the transition to the Proof-of-Stake algorithm 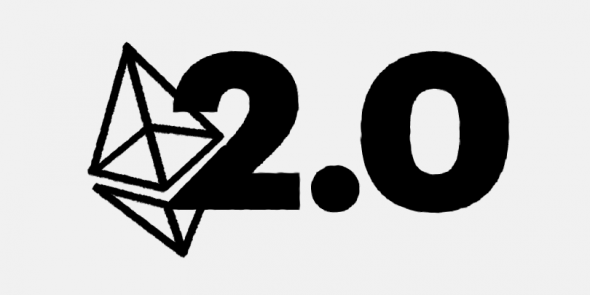 Ethereum 2.0, also known as Eth2 or Serenity, is an update to the Ethereum blockchain. The update aims to improve the speed, efficiency, and scalability of the Ethereum network so that it can process more transactions and provide a higher level of security.

Difference between Ethereum 2.0 and Ethereum

The main purpose of update 2.0 is to avoid the problems associated with the growth of the number of users. The first change that the developers came up with was a new consensus algorithm. Blockchain participants agree on each new block before it is created. The security of this process is now provided by the miners. In the future, this will be done by validators – users who have contributed and blocked their share of coins (in staking).

The second change is to create fragmented chains. If now all transactions go through one blockchain, then the update will add 64 new chains. This will speed up transactions.

The Eth2 upgrades will also improve Ethereum’s defenses against coordinated attacks such as the 51% attack. This is a type of attack in which a person who controls most of the network can forcefully make fraudulent changes.

The zero phase of Ethereum 2.0 – the “signal chain” (Beacon Chain) – was launched on December 1, 2020. With Phase 0, Ethereum began its transition to Proof-of-Stake (PoS) consensus. ETH holders can stake them and participate in the network as validators, receiving rewards for confirming blocks. At the time of writing, 10 million ETH is frozen on the smart contract.

As part of the zero phase, the following aspects of PoS began to function:

On December 3, 2020, Ethereum creator Vitalik Buterin announced the adoption of a new roadmap 2.0 that became more flexible and eliminated terms like phase 1 and phase 2 entirely. The definition of the characteristics of each phase is now more independent of each other and includes the work done for Ethereum 1.x. The updated roadmap covers all the developments of the Ethereum team and provides a detailed overview of the further development of the platform, including the approximate timeline for the activation of updates.

The key features of the next important milestone are the transition of Ethereum 1.0 to Proof-of-Stake and sharding (separation) of data. All this was previously planned as part of phases 1 and 1.5. An important change in the new roadmap is that these three phases are largely independent and can be implemented in parallel.

Sharding is the process of splitting a database horizontally to distribute the load. In the context of Ethereum, sharding will reduce network congestion and increase the number of transactions per second by creating new block chains.

The Merge update is scheduled for 2022. This upgrade will mean the merger of the Beacon Chain and the main Ethereum network, which are now operating separately from each other. This will end Ethereum’s Proof-of-Work algorithm and usher in an era of new Ethereum technology based on the Proof-of-Stake technology used in Beacon Chain.

The foundation of the next phase of the upgrade will be Shard Chains, due to launch in 2023. They will give Ethereum more options for storing and accessing data.

By the time additional shards are added, the main Ethereum network will already be secured with Beacon Chain and using proof of ownership. This will allow the main network to be used to build shard chains based on second layer solutions that increase scalability.

In January 2022, the Ethereum Foundation announced that it would stop calling the upcoming Ethereum 2.0 update, but the name has already taken root and continues to be used in the community. The rebranding is intended to reflect the fact that Ethereum 2.0 is an upgrade and not a launch of a new network.

How the update will affect the Ethereum price

The transition to PoS will be accompanied by high volatility of ETH, Alfacash director Nikita Soshnikov believes. According to him, immediately after the update, a short-term decrease in the rate of the cryptocurrency is possible, followed by a sharp increase.

“The transition to PoS is expected to lead to an increase in the rate. In 3-4 months after the update, the price of Ethereum will exceed $6,000, on the horizon of 6-12 months it will rush to $10,000,” Soshnikov predicted.

The number of emitted ETH coins will decrease, which will lead to a shortage of supply on the market, and this will cause an increase in the coin rate, the expert explained. Senior analyst Bestchange.ru Nikita Zuborev agreed with him.

He also pointed out that it is possible to expand the Ethereum community due to the fashion for the “green” trend that PoS is famous for, which does not involve energy-intensive mining.

“However, in the short term, at the time of the direct transition to Ethereum 2.0, we quite expect a strong fall in the course,” the analyst warned.

According to him, the main driver of the growth in the value of Ethereum in recent months is a positive news background around the community – the implementation of an artificial deflationary model (commission burning), and expectations of a transition to POS, and the development of DeFi within the ecosystem, and many other informational reasons.

That is, the fundamental growth factors are mainly the future expectations of investors, which may exhaust themselves by the time the new version is launched, Zuborev emphasized. He believes that the deflationary effect will be delayed – most likely it will manifest itself only in a few months or even years.

And if the transition is accompanied by scandals (team splits and bugs), then it will hit the ETH rate even more seriously in the moment, the specialist concluded.