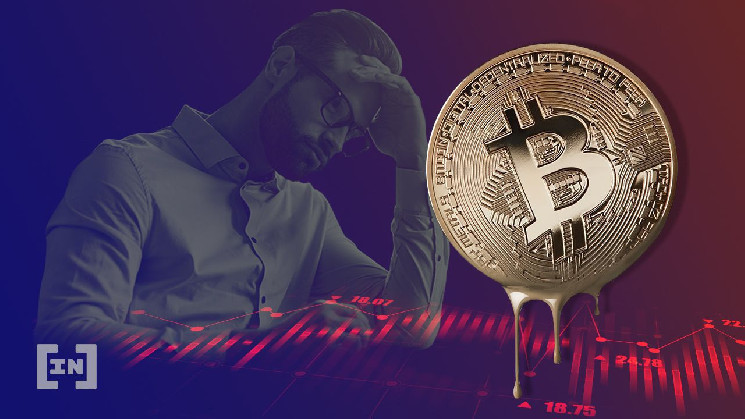 Bitcoin (BTC) gives conflicting signals on long- and short-term timeframes, which does not allow you to determine the direction of the trend with confidence.

However, despite the decline, the coin managed to hold above the $42,000 area, which since November 2021 has acted alternately as both support and resistance.

In addition, the MACD indicator continues to give bullish signals, forming 4 bullish candles in a row (green icon).

Until BTC closes below $42,000, we can still assume that the price decline is just a retest of the previous bullish breakout level.

At the moment, the price has dipped from the historical maximum by 39%.

It is worth noting that the last three weekly candles are close to the formation of the evening star pattern, which is often considered a sign of a bearish reversal. The fact that such a pattern potentially appears on the weekly chart increases its significance.

The formation of the pattern will be confirmed if the week closes below $41,262 (red line).

Bearish breakout on the daily chart

Here, the BTC rate fell below the $45,000 horizontal area, which played the role of resistance from February 8 until the bullish breakout on March 7. However, this breakthrough could still be regarded as a false one, since on April 7, Bitcoin again went below this mark.

The daily MACD has been declining for 11 days and has almost entered the red zone (red icon). This is a signal that is associated with a bearish trend – especially if the indicator manages to move into bearish territory.

Over the past 70 days (highlighted in the chart), the RSI has fluctuated on both sides of the 50 mark. This is considered a sign of a neutral trend, so the RSI cannot tell us anything about the further direction of the trend right now.

BTC has been moving along an ascending support line since January, however, the angle of its slope is unclear due to the presence of long lower wicks.

In the 6 hours chart, the coin made a bearish break out of a descending parallel channel on April 6 and then turned it into resistance.

The rebound occurred from the Fibo level of 0.618 correction. The MACD indicator is giving bullish signals (black arrow), but they are not strong enough to confirm a reversal.

The 2-hour chart also shows the possibility of a rebound as the RSI is giving strong bullish divergence signals here.

If this does happen, the $43,000 channel support line could act as resistance again.