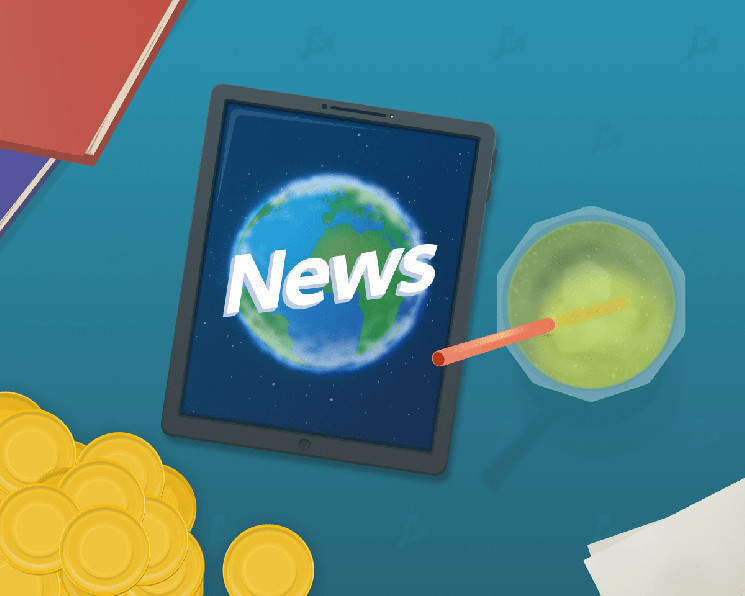 The EU banned the citizens of the Russian Federation and Belarus deposits on crypto wallets, and the German police confiscated Hydra servers

The European Union banned deposits on crypto wallets for citizens of the Russian Federation and Belarus, the German police confiscated Hydra servers, LocalBitcoins transferred data of more than 100,000 Russian users to the tax authorities, and other events of the outgoing week.

After a local rally at the end of March, Bitcoin quotes corrected by 6.5% over the week. At the time of writing, digital gold is trading near $42,880.

The flagship has traditionally pulled the rest of the market with it. All digital assets from the top 10 by market capitalization closed the week in the red. The worst performers were Terra (-17.9%), Solana (-14.5%) and Avalanche (-12.2%). Ethereum fell by 4.6%. 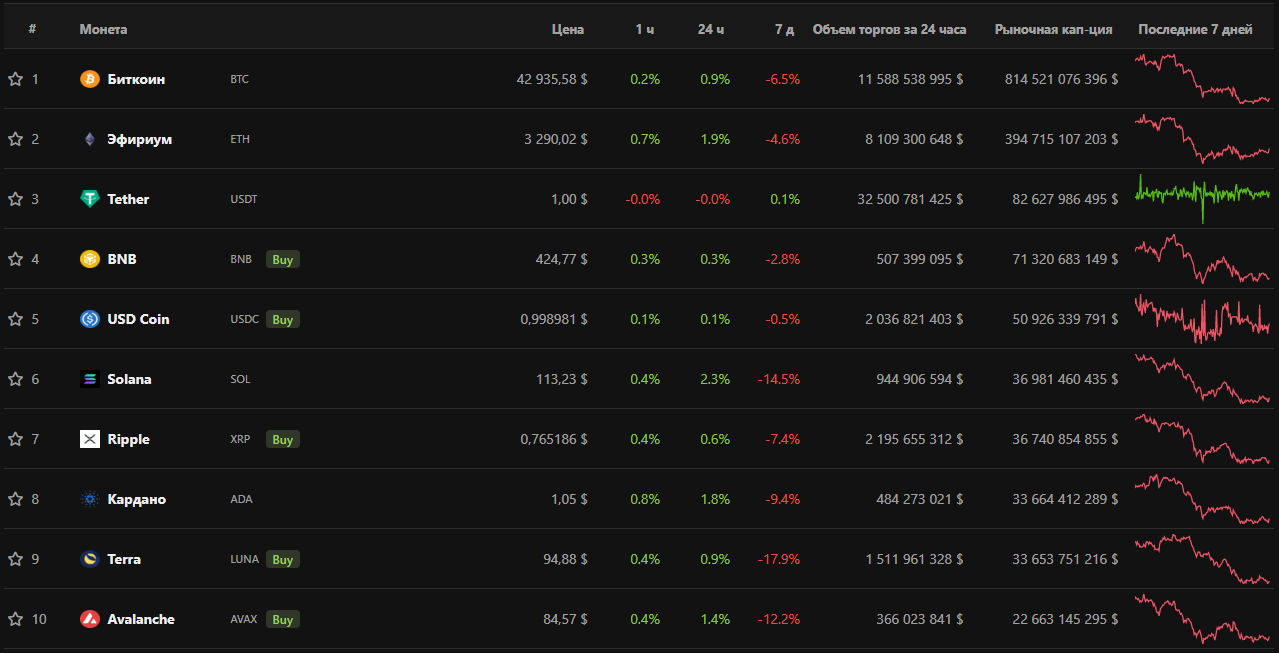 According to the CoinCodex service, ICHI, the management token of the platform for issuing stablecoins, has risen the most over the week among moderate-cap digital assets. Its price increased by 83.99%.

The token of the Waves blockchain platform fell in price more than others. Its price has decreased by 50.66%. 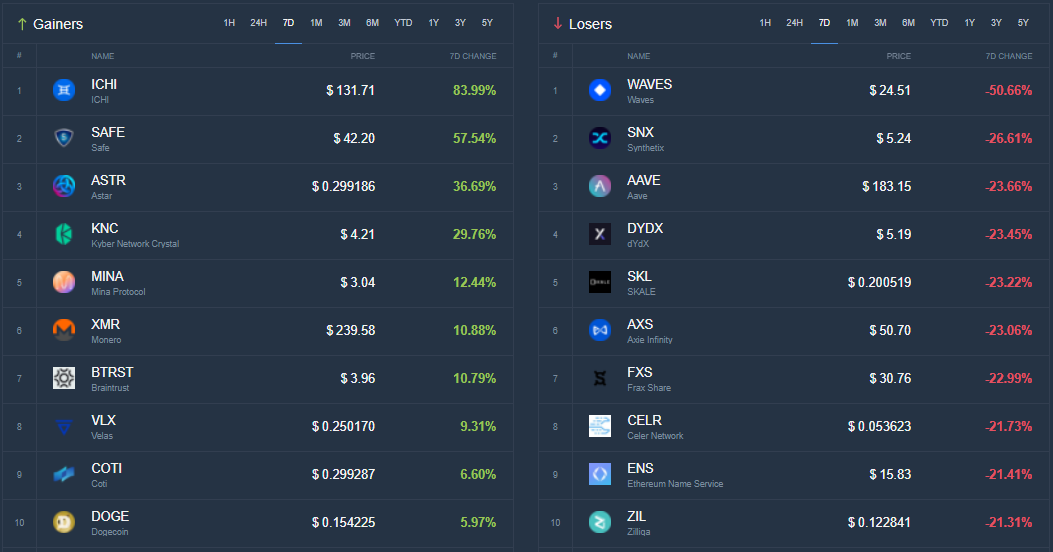 The total capitalization of the cryptocurrency market amounted to $2.09 trillion. The Bitcoin dominance index rose to 39%.

The European Union approved the fifth package of sanctions against Russia because of its invasion of Ukraine. Among the measures taken by the EU is an “extended ban” on deposits in cryptocurrency wallets and the sale of banknotes and securities denominated in any currency of the EU member states to individuals and legal entities from the Russian Federation and Belarus.

This week, the Central Bank of the Russian Federation recognized the impossibility of circumventing sanctions with the help of bitcoin.

The German Federal Criminal Police confiscated the German servers of the Hydra darknet marketplace. As part of the international operation, 543 BTC were also seized with a total value of about 23 million euros. The investigation into the case has been ongoing since August 2021 with the participation of the US authorities.

As part of the investigation, the US Treasury imposed sanctions on Hydra and the Garantex cryptocurrency exchange. The Treasury’s Office of Foreign Assets Control has identified more than 100 crypto addresses associated with illegal transactions.

Later, the Northern District Court of California filed an indictment against one of the administrators of the Hydra darknet marketplace, 30-year-old Russian Dmitry Pavlov (administration of the platform, providing hosting services to it, conspiracy to launder money and distribute drugs).

Also this week, a district court in St. Petersburg allowed investigators to seize stolen Ethereum coins on a suspect’s wallets. The decision is a precedent in the judicial practice of the Russian Federation.

LocalBitcoins submitted data of over 100,000 Russian users to the tax authorities

The Tax Service of the Russian Federation received information about more than 100,000 users of the LocalBitcoins P2P platform in 2021. This was announced by the managing partner of GMT Legal Andrey Tugarin with reference to these departments. He clarified that LocalBitcoins transmits data to tax Finland, and that, in turn, provides them at the request of the Federal Tax Service of the Russian Federation.

In second place in the ranking was last year’s leader – co-founder and head of FTX Sam Bankman-Fried ($ 24 billion). The first three were closed by the founder and CEO of Coinbase, Brian Armstrong, with a fortune of $6.6 billion. The publication counted a record 19 billionaires in the industry.

The United Nations High Commissioner for Refugees (UNHCR) this week accepted a donation of $2.5 million in BUSD from Binance Charity.

The Binance exchange, in turn, will launch a charity cryptocurrency card during April for all Ukrainians who have left the country and need help.

Intel has introduced a new chip for bitcoin mining. The company stopped its activities in the Russian Federation

Intel has announced the launch of the second generation of its own bitcoin ASIC chip called Blockscale.

Intel announced this week that it was suspending operations in Russia in response to the invasion of Ukraine.

Unknown people launched a fake “Sbercoin” on the PancakeSwap exchange

The SberCoin.Finance project has launched trading in the SBER token under the guise of the official stablecoin of Sberbank. The developers announced their connection with the credit institution and promised a fixed annual yield of 383,025%.

In a comment to ForkLog, representatives of Sberbank denied involvement in this project and clarified that the official Sbercoin has not yet been released.

MicroStrategy bought over 4100 BTC for $190 million

A division of MicroStrategy, MacroStrategy, purchased 4,167 BTC worth $190.5 million. The company currently holds 129,218 BTC in reserves.

On April 8, the Near Protocol project token rose by 22.7%. Capitalization of NEAR crossed the mark of $12 billion.

Growth drivers were the news about a $350 million funding round and rumors about the launch of the USN algorithmic stablecoin. The last one of the users found in the test interface of the Ref Finance protocol.

Ledger introduced an updated version of the hardware wallet

Hardware wallet maker Ledger has unveiled a new device, the Nano S Plus, aimed at NFT collectors and DeFi users.

According to the developers, the new device has a larger screen, and increased memory capacity “allows you to install more than 100 applications and manage more than 5,500 digital assets.”

Lightning Labs has introduced a protocol for issuing stablecoins on the Lightning Network. Lightning integration coming to Shopify and Robinhood

The Lightning Labs team has closed a $70 million Series B funding round. The funds will be used to develop the Taro protocol, which, among other things, allows you to issue stablecoins on the Bitcoin network and use them in Lightning Network applications.

Strike CEO Jack Mullers unveiled several Lightning Network-based payment app operator partnerships, the main one signed with Shopify. Integration will exclude banks from the calculations. This will provide savings on commissions for sellers and privacy for buyers.

The main factor in the price growth to new highs, according to Arthur Hayes, will be the transition to the Proof-of-Stake algorithm, after which Ethereum will function as a commodity bond.

The founder of Zotobi Management Limited, Igor Chuprin, demanded that Telegram return investments in the Telegram Open Network (TON) project in the amount of $1 million in full.

However, the court rejected the claim, considering that Chuprin either got acquainted with the documents, since they were distributed on the network and discussed in the blockchain community, or “understood all the risks, and it didn’t bother him.” This is evidenced by the signed agreement.

According to the publication, Meta is considering the creation of several centralized tokens – “social” or “reputation” (for its own metaverse), as well as reward tokens (for content creators, influencers and Instagram users). Tokens are “unlikely” to use blockchain technology in their work.

Philosopher and professor of psychology at the University of Toronto, Jordan Peterson, at the Bitcoin 2022 conference in Miami, called the first cryptocurrency revolutionary, but causing concern.

According to him, a decentralized monetary system, which will deprive the state of monetary control, in addition to positive changes, carries unforeseen risks.

After the start of the Russian invasion, many Ukrainians were forced to flee the country. ForkLog told how to cash out cryptocurrency in Turkey and Polish Warsaw.

The step-by-step instructions showed how to use the non-custodial Trust Wallet wallet from the Binance ecosystem.

Against the backdrop of dollar inflation and sanctions against Russia, experts are more actively discussing possible changes in the global monetary system. ForkLog figured out how justified the talk about the “death” of the dollar and whether the Chinese yuan, or rather its digital version, can take the place of the main reserve currency.

The laws of propaganda say: a skilled manipulator can quickly enslave and direct the masses to achieve absolutely any goals. ForkLog explained what these principles are and how to distinguish truth from fiction.

In the analytical report for March, we talk about the main events and key trends in the cryptocurrency market.

The Bitcoin Industry by the Numbers column is sponsored by the global blockchain ecosystem Binance.

ForkLog AI has collected the most important news from the AI ​​world over the past week.