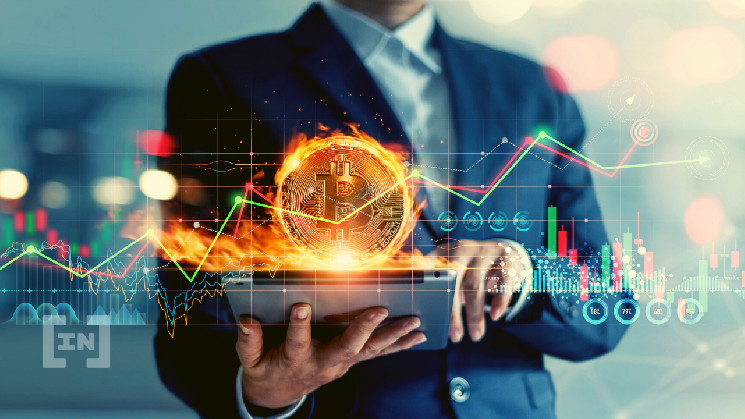 cyclical high has not yet been reached

The editors of BeInCrypto analyzed BTC on-chain indicators that estimate the age of the coins involved in transactions.

These ranges show what percentage of coins spent belong to a certain “age group” or how long they were stored before the transaction, remaining without movement. So, 1-2-month bars reflect current transactions with BTC, whose UTXO is 1 to 2 months old.

An interesting picture is given by periods of bursts of long-term ranges. As seen in February 2018 (black circle), peaks like these usually occur at the start of a bear market.

This suggests that coins that have not moved for a long time have now moved and started spending in anticipation of a protracted downtrend. 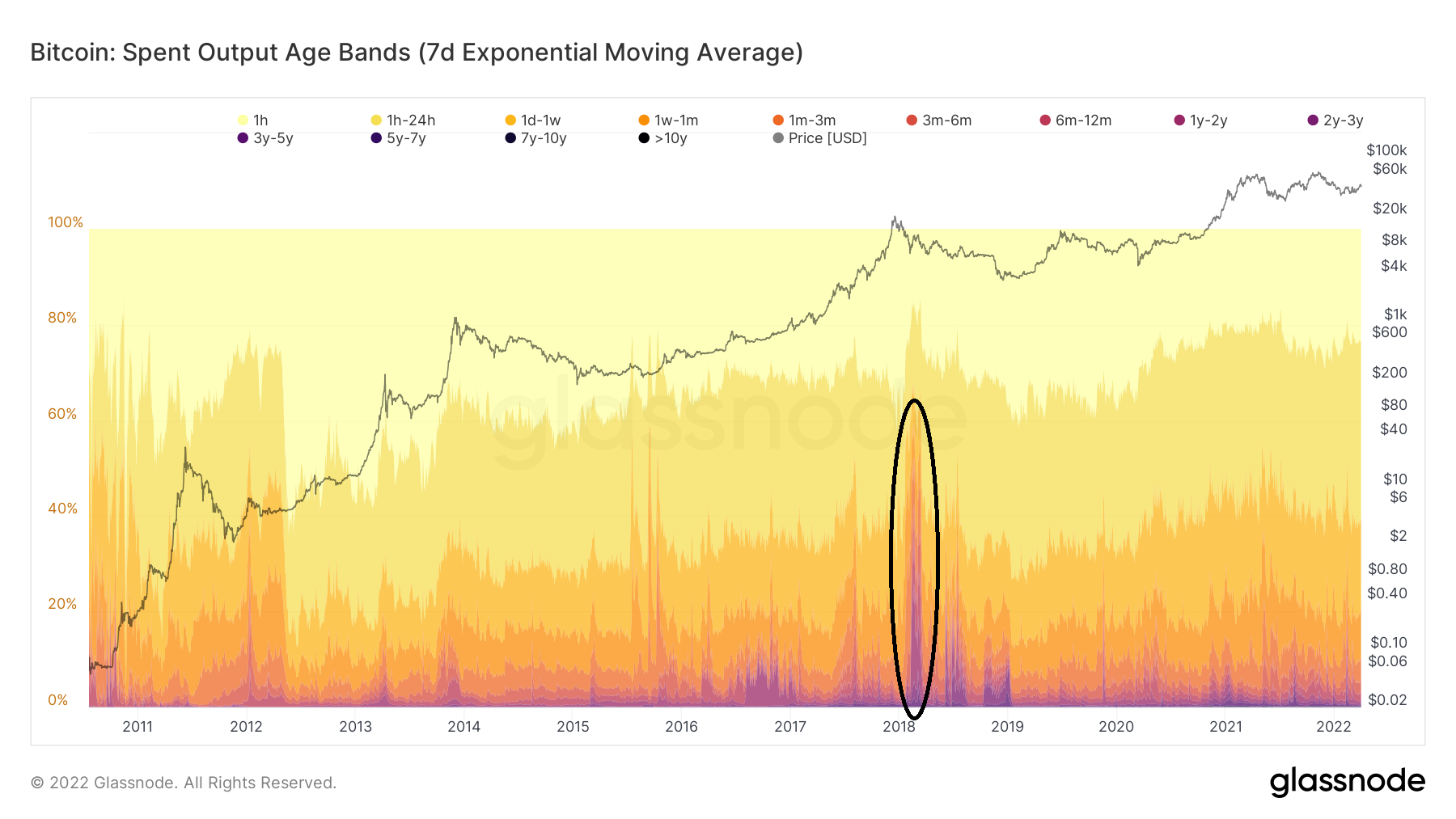 On the contrary, the dynamics of this on-chain metric since February 2021 has been dominated by short-term participants. With the exception of two periods (black circles) in May 2021 and February 2022, more than 90% of transactions were for coins whose UTXO was less than a month old. 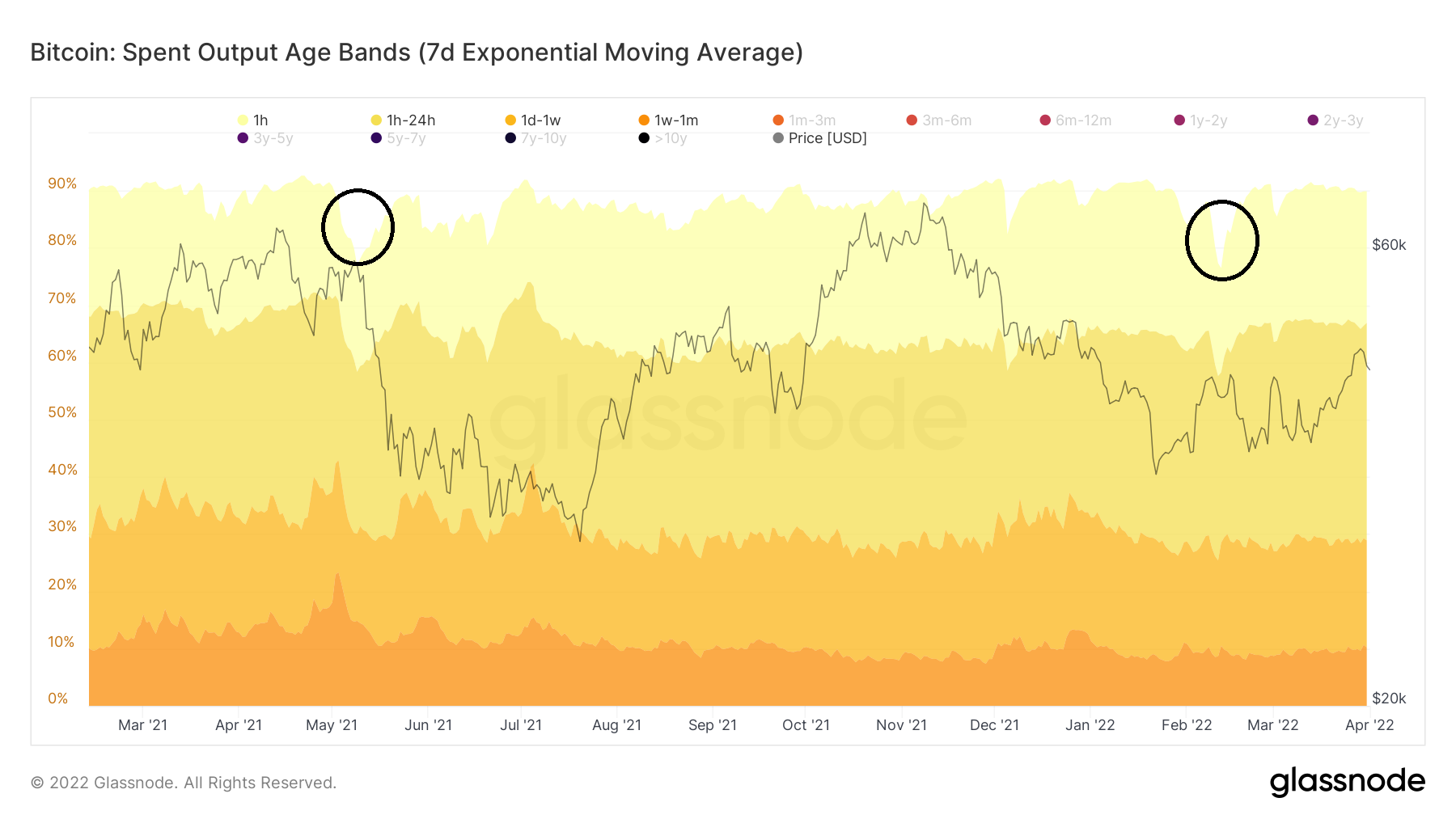 HODL waves (HODL wave) reflect the percentage of BTC coins that were in motion in a certain period of time. Accordingly, if the indicator of the 3-6-month HODL-wave is 20%, this means that 3-6 months ago 20% of the total volume of existing bitcoins were in motion.

The main difference between this on-chain indicator and SOAB is that the former takes current transactions and estimates the time of previous transactions, while the latter reflects the percentage of BTC that moved in a certain period relative to the total supply of bitcoins.

Unlike SOAB, rising short-term HODL wave bands tend to correlate with a cyclical market top. This is because long-term hodlers sell their coins to short-term players.

Thus, the top of the market cycle is usually formed entirely by short-term players, since long-term hodlers have already transferred their coins to them.

This is clearly represented by the cyclic tops of 2013, 2018 and April 2021 (black circles), where peak bursts of waves with short time intervals occurred around the same periods.

However, this did not happen during the November 2021 top formation (white circle). This leaves us hoping that then the market reached only a local, and not an absolute maximum. 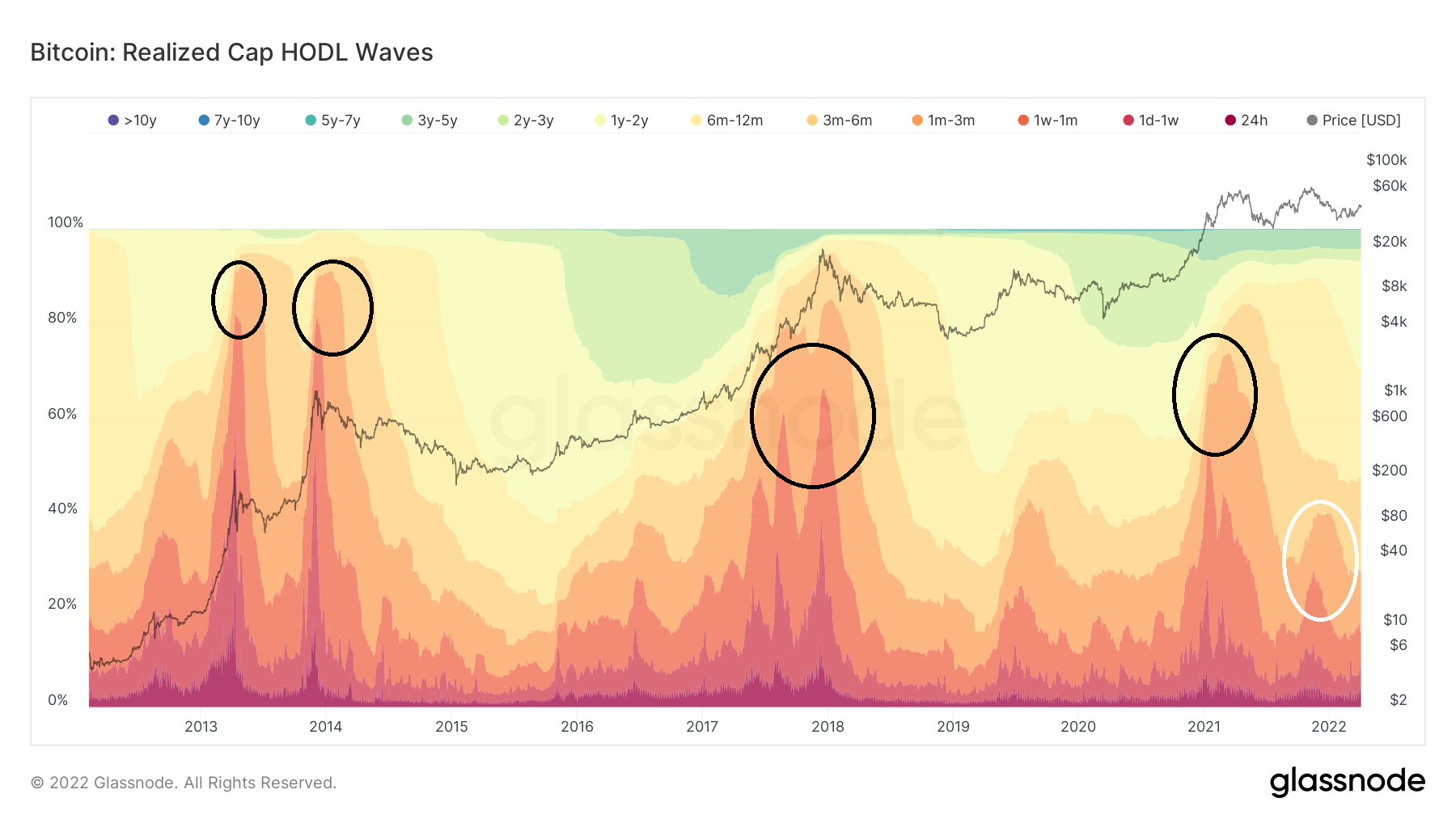 An interesting moment in the current bull run is the extension of the 1-2 year wave that has been ongoing since December 2021 (black arrow).

This process occurs as a direct consequence of the decrease in the 6-12-month band.

This means that players who entered the market between December 2020 and July 2021 (black circle) are hodlers and their coins have already passed the 1-2 year dormancy threshold.

The BTC exchange rate from December 2020 to July 2021 fluctuated in the range from $28,000 to $64,000. Thus, some of these buyers are now at a loss, and some are in profit. This is a positive signal as it indicates investor loyaltydespite the fact that the price action was not unequivocally bullish. 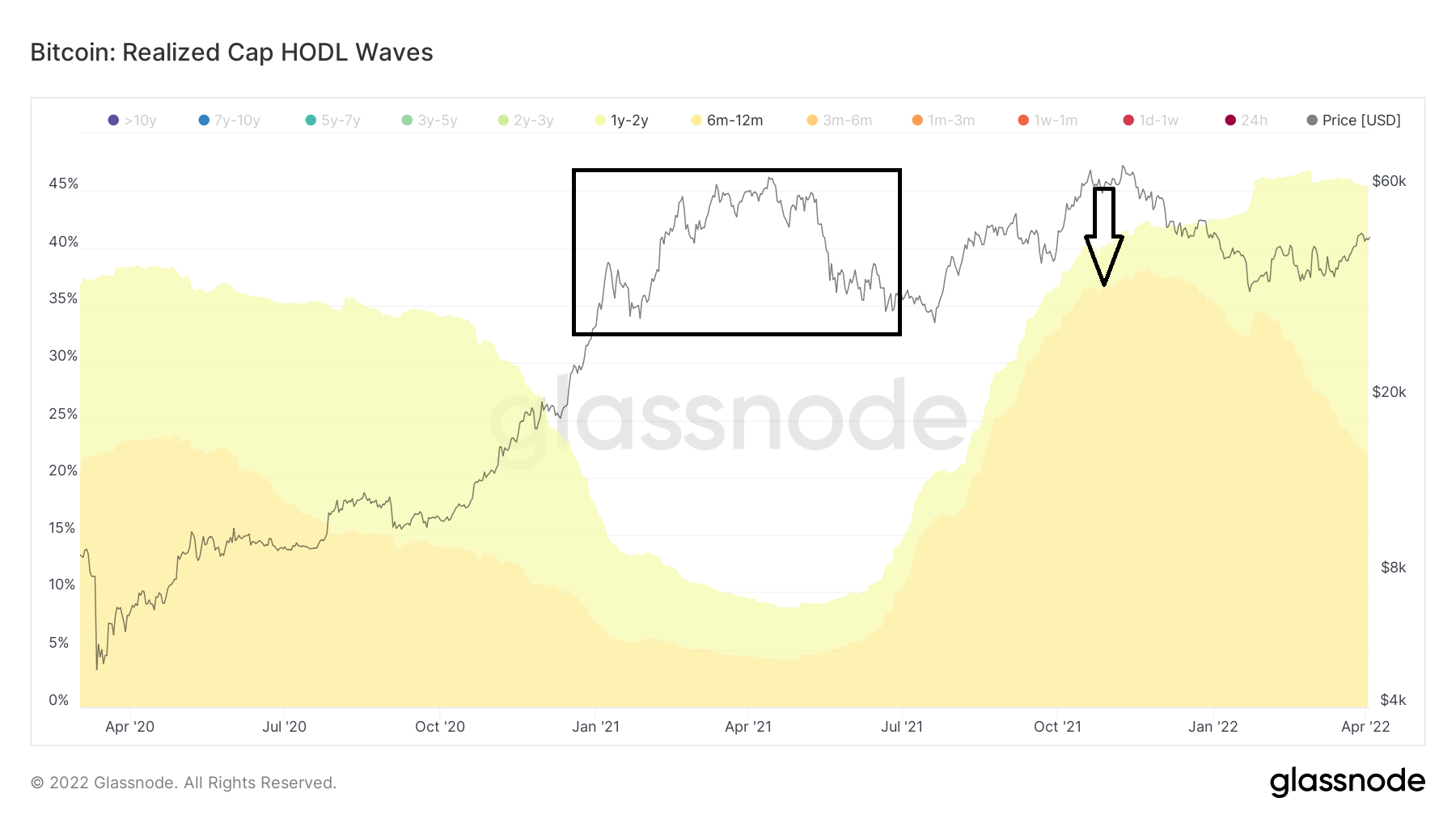 A similar expansion of 1-2-year waves against the background of a decrease in 6-12-month waves was previously noted three times:

As history shows, all three of these periods marked accumulation phases, followed by the beginning of a bullish price run. 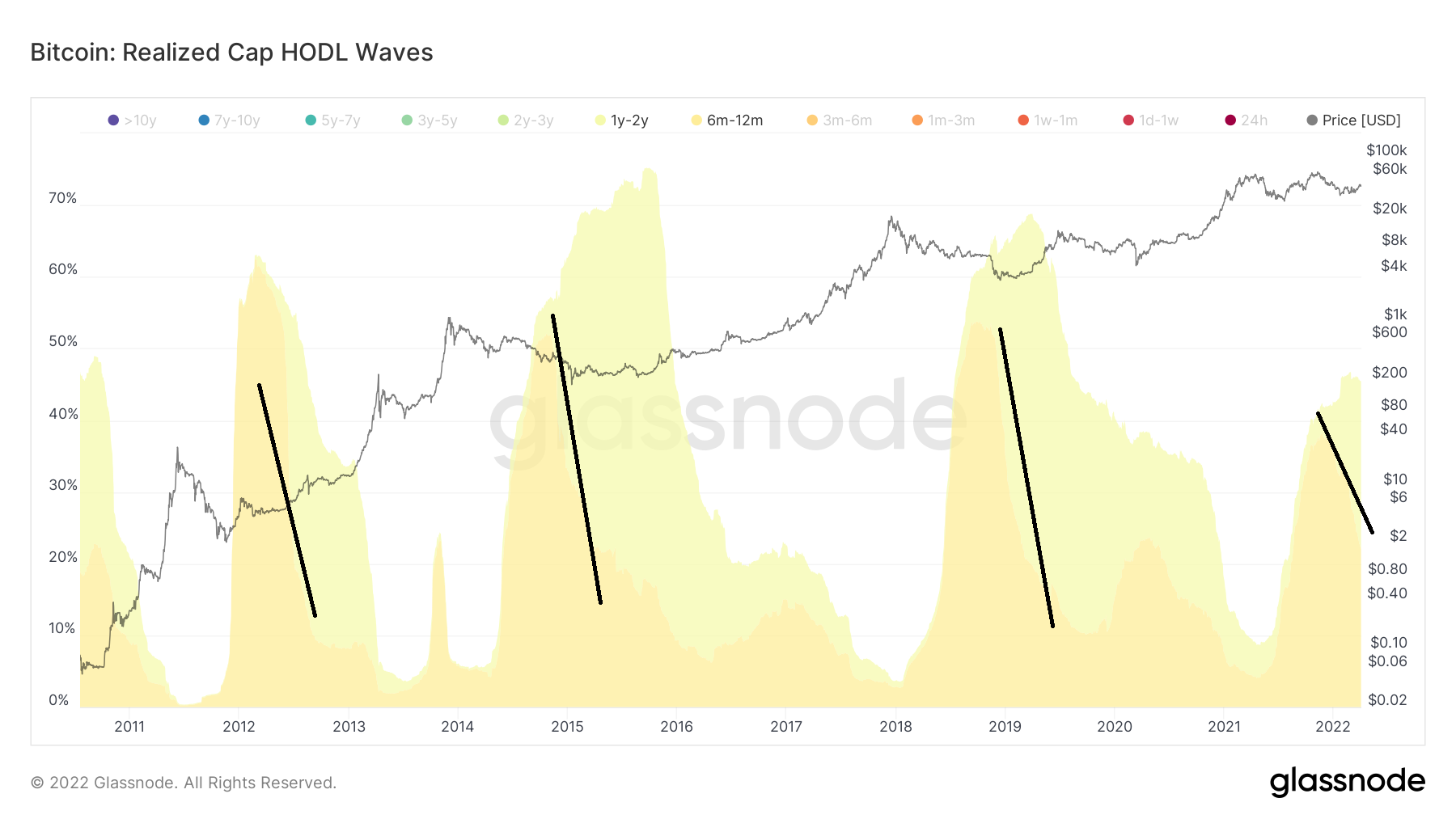 Currently, 28% of the total BTC supply has not been in circulation for at least a year. 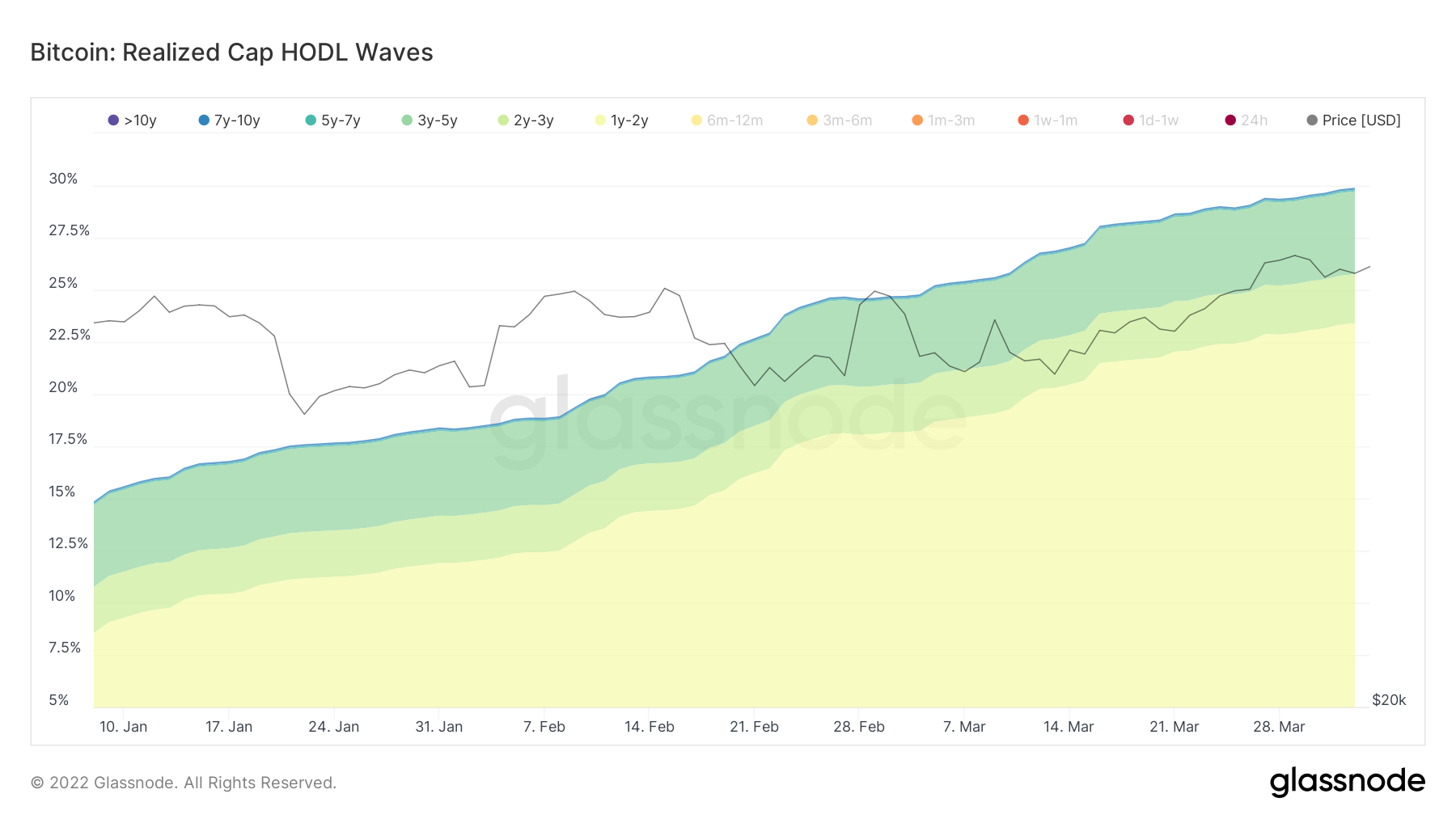 Tokenomics as the basis for token price growth