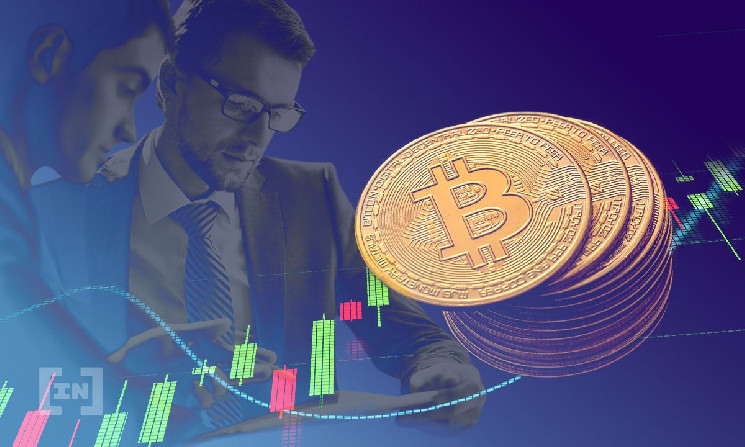 Since January 24, Bitcoin has been growing inside a potential ascending parallel channel. March 14th BTC rebounded from the support line of the channel and accelerated growth.

On March 27, Bitcoin made a bullish breakout of the $44,800 resistance area and the channel’s median line. Subsequently, BTC returned to this area and tested it as support first on April 1 and then on April 6 (green icons). The last daily candle has not closed yet, but it looks like the price is forming a long lower wick. This is considered a sign of pressure from buyers.

The next immediate resistance will come into play at $51,000. This is the Fibo 0.5 retracement level, as well as the channel resistance line. Indicators MACD and RSI started to decline, but still remain in the green zone. 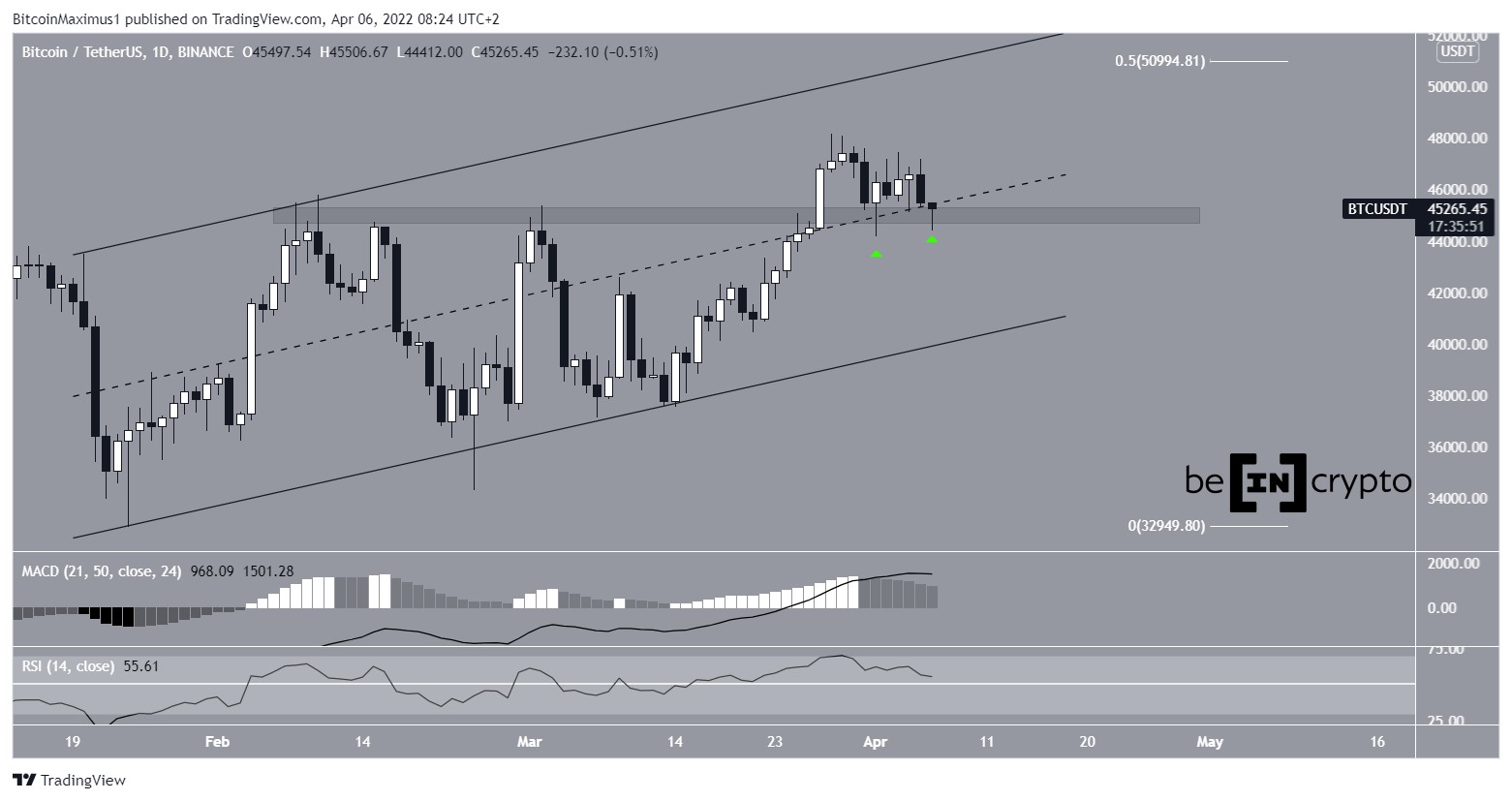 On the 2-hour chart, BTC has been moving along a descending resistance line since March 28. The price has already attempted to storm this line six times (red icons), and they all ended in failure. The most recent attempt occurred on April 6 and ended with a sharp pullback of the price to a low of $44,412.

However, Bitcoin bounced off a minor support in the $44,550 area and formed a very long lower wick. This area has supported the market for the second time (green icons).

The results of the most likely wave analysis suggest that Bitcoin is in wave C of the ABC price structure (black).

The probable target and top of this move could be the $50,700 area. This would give us an A:C wave ratio of 1:1 (black), which is typical for such structures. In addition, this is the Fibo level 1.61 of the outer correction of sub-wave 4 (white color).

The results of the sub-wave analysis are presented on the graph in white. 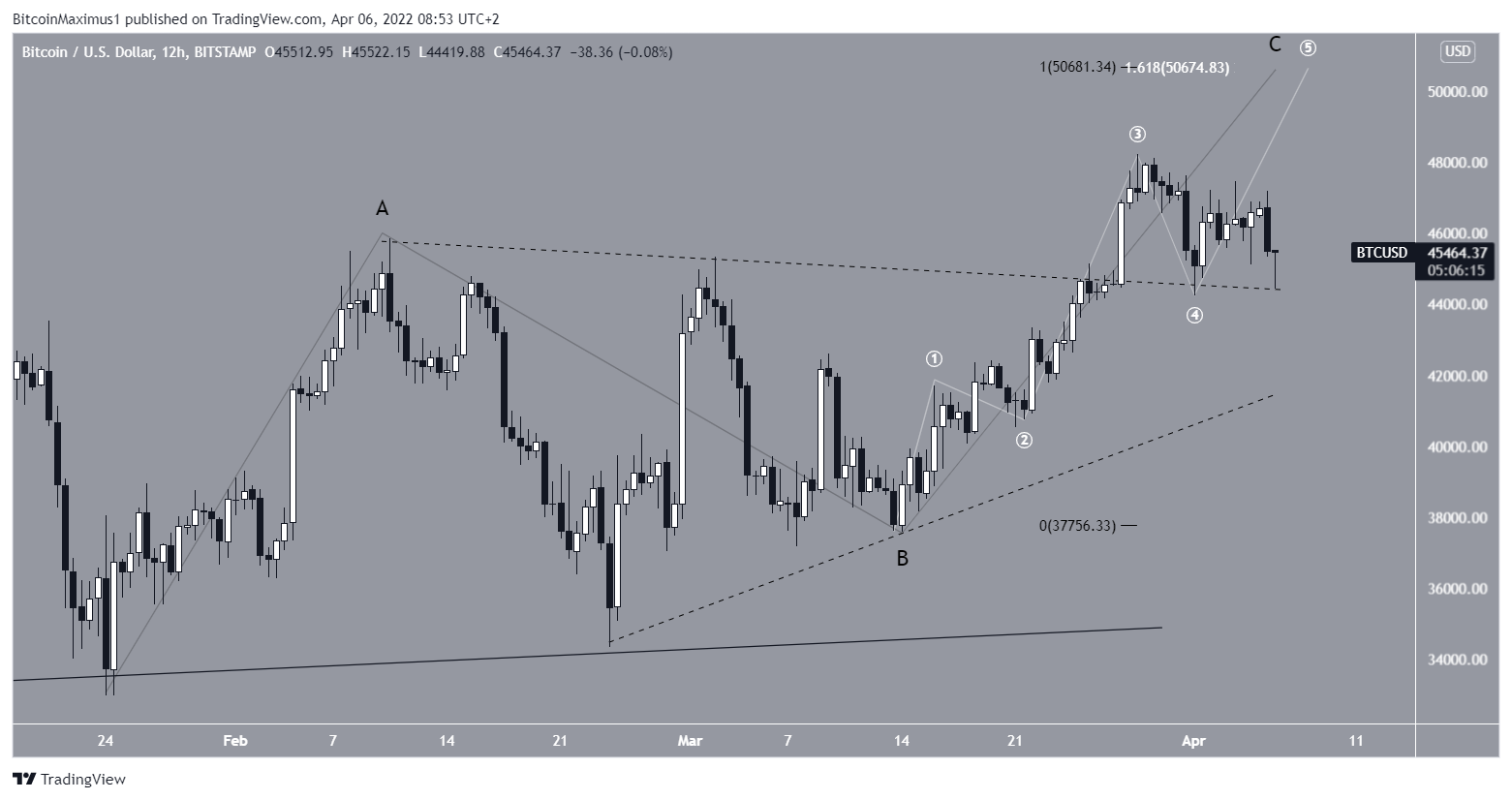 An analysis of shorter-term timeframes suggests several scenarios. Most likely, BTC is still in sub-wave 4, which has taken the form of a symmetrical triangle.

After this pattern completes, a bullish breakout towards $50,700 is possible. As part of the second scenario, BTC is in the fifth, last, sub-wave.

Here, the length of the second small sub-wave (red color), which in fact turned out to be larger than the second sub-wave (white color), causes confusion.

According to this scenario, Bitcoin should peak closer to $54,000. According to the last option, BTC has just completed the formation of sub-wave 4 inside the “running” correction (running correction).

The end result of the development of this scenario will be almost identical to the scenario with a triangle. 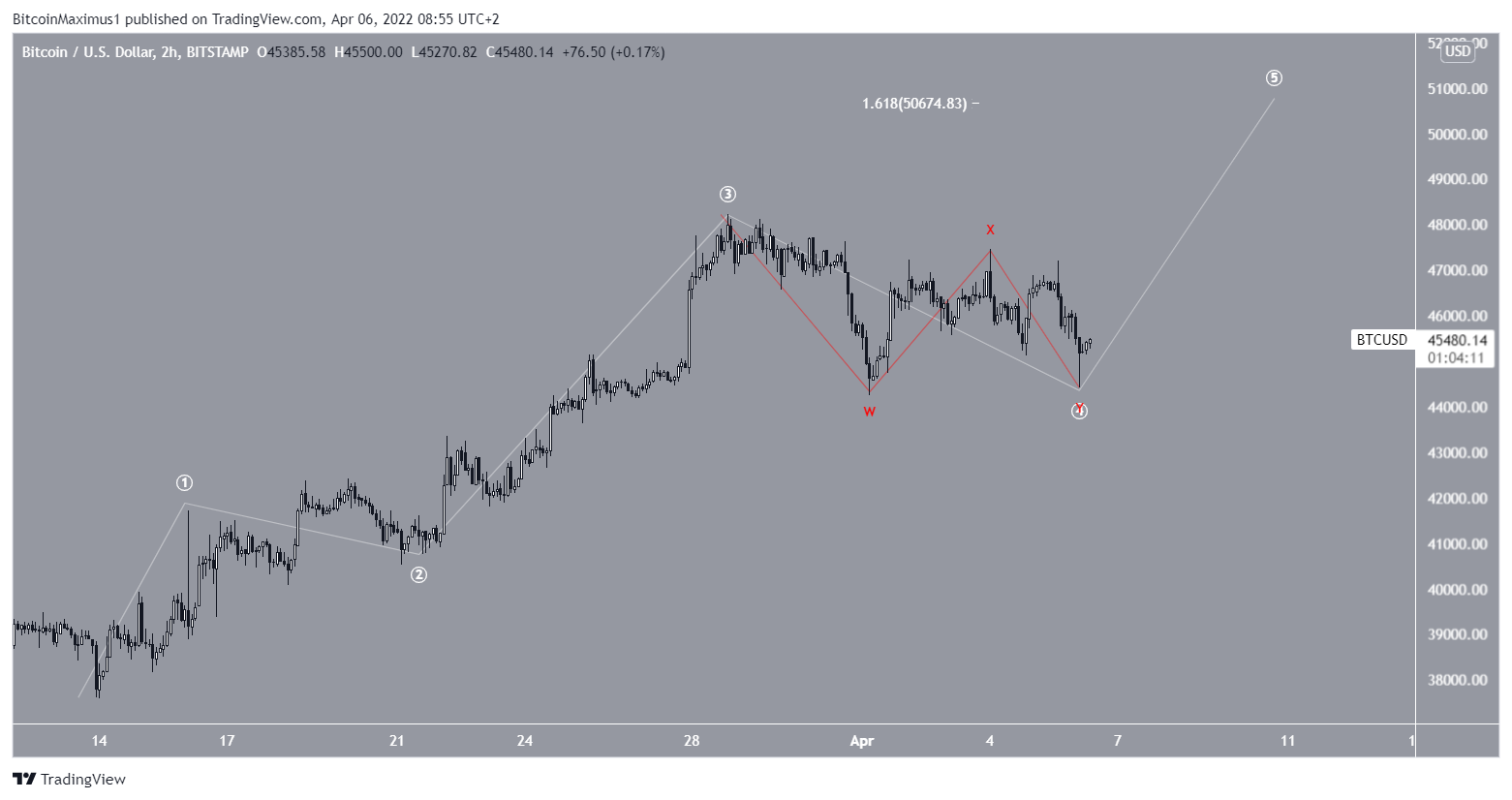 According to the main bearish scenario, BTC has completed wave C. Now the market is again testing the previously broken horizontal and diagonal levels (green icons).

As long as trading continues above these levels, this scenario will be considered unlikely. 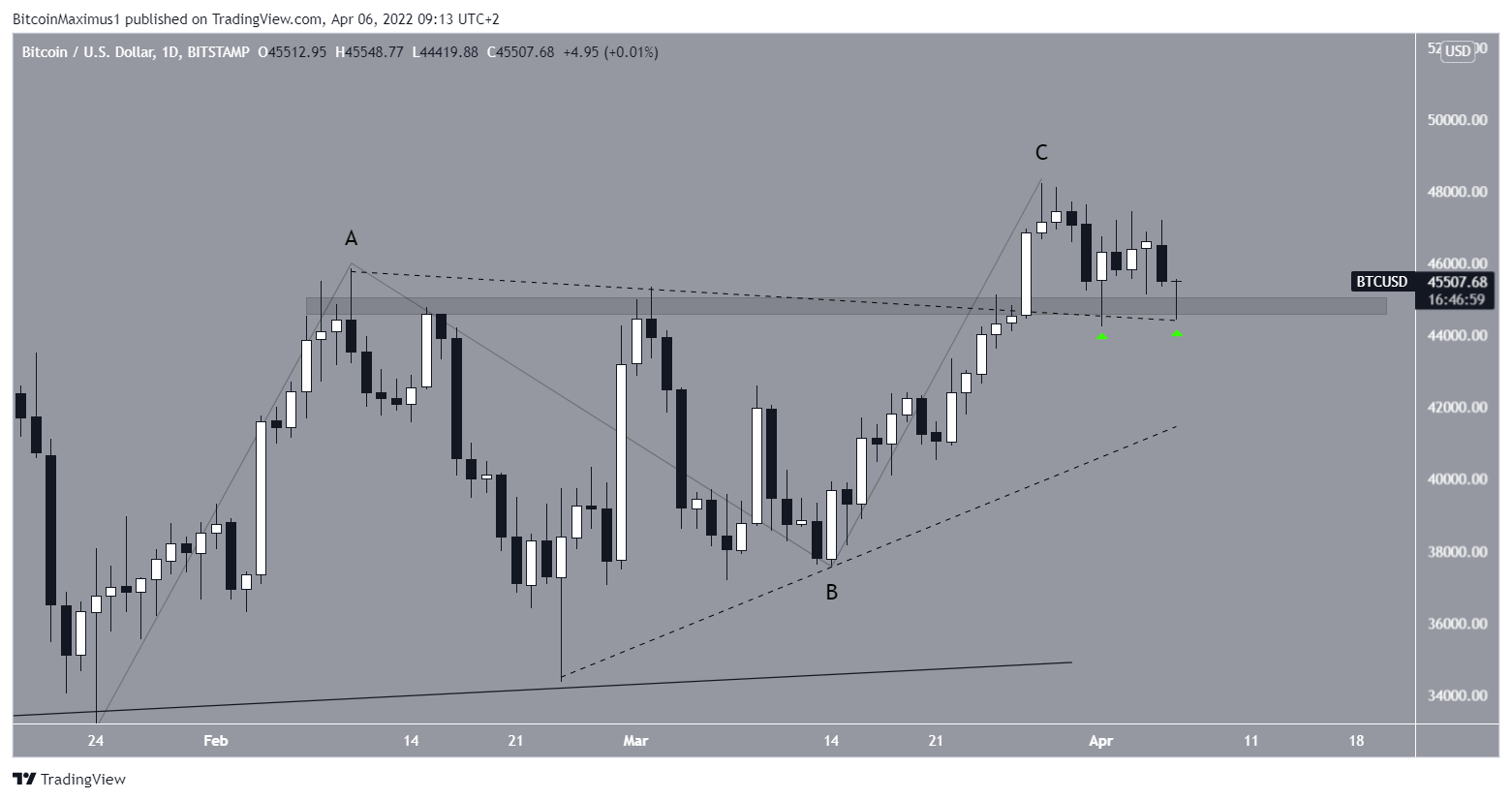 In addition, short-term price action also does not match this bearish forecast. The point is that the decline from the March 28 high is a three-wave structure, not a five-wave pattern, although there should have been five waves in a bearish trend reversal. 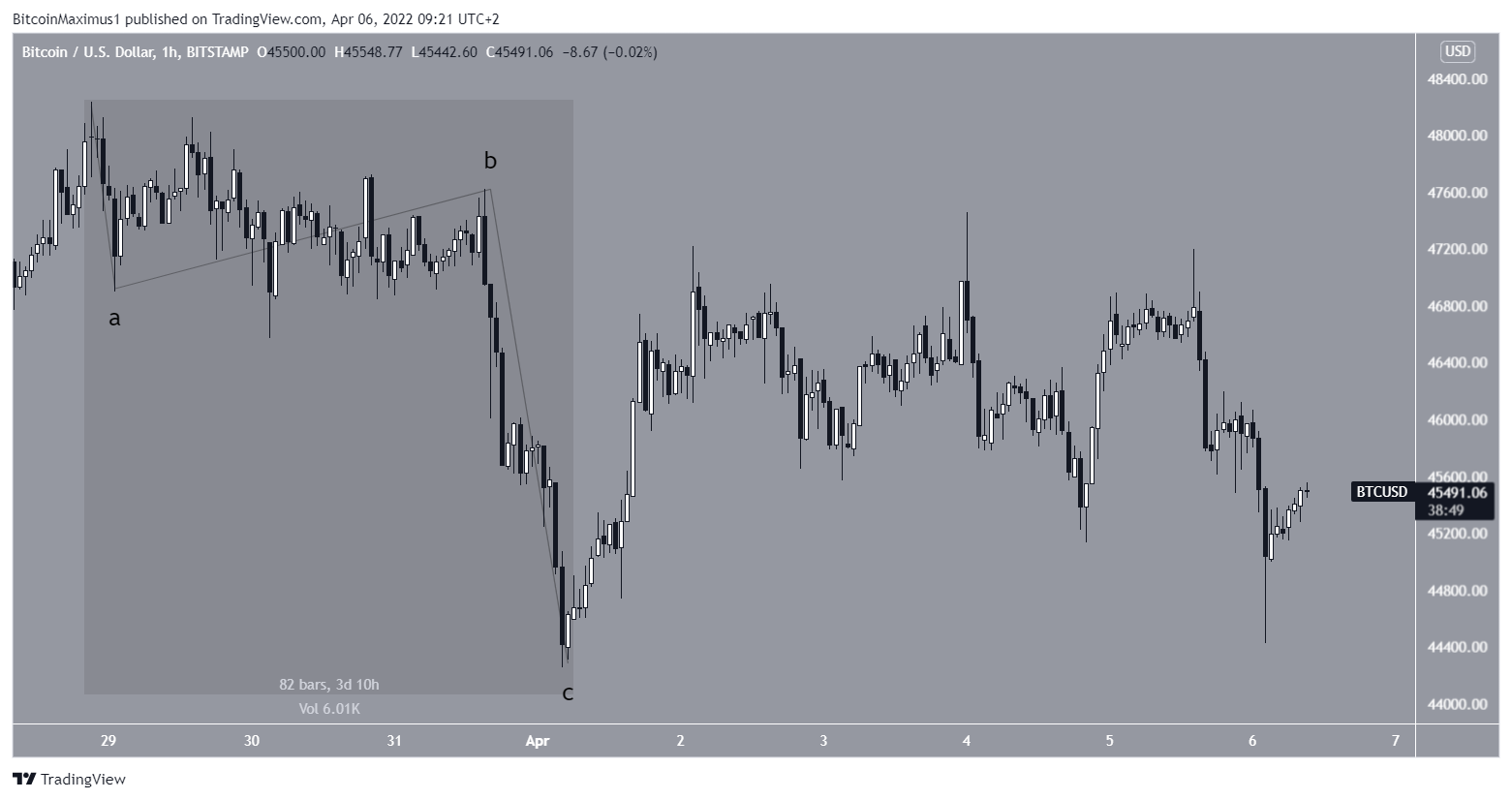