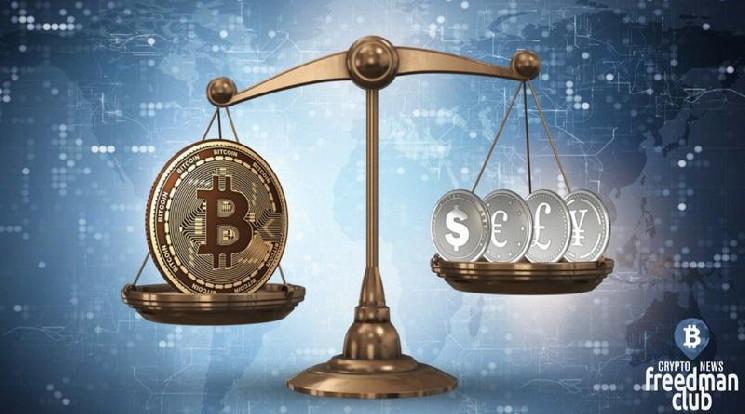 Will bitcoin protect against inflation?

Can bitcoin serve as a hedge against inflation? First, let’s look at what inflation is and what are the traditional ways to protect against it.

Inflation exists in all economies. And always traders, investors and ordinary people are trying to protect their savings and capital from depreciation as a result of inflation. Traditional instruments for this are gold, stocks and real estate, whose prices tend to rise when inflation is high. It must be understood that these tools have some limitations.

Recently, precious metals, gold and silver, are not so effective tool to protect against inflation in short time periods. In 2021, gold lost in price. Real estate is a low-liquid instrument that carries high transaction costs and requires ongoing management and maintenance. Shares carry risks of price reduction, require certain skills from investors.

Inflation is a decrease in the purchasing power of a currency. As a rule, the indicator of inflation is the consumer price index (CPI).

The following chart shows how the prices of goods in the United States rose many times over between 1960 and 2021: 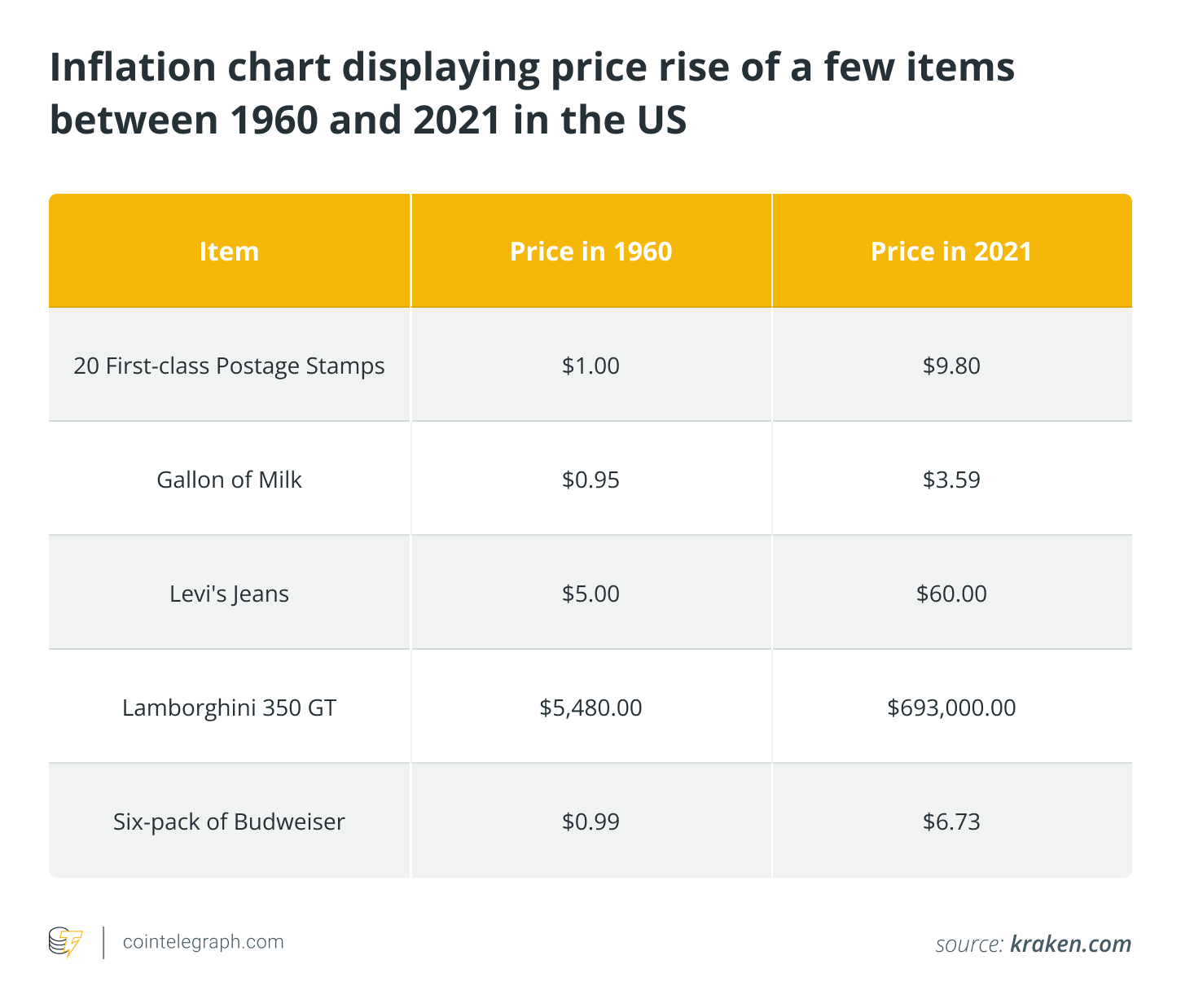 3. Methods of protection against inflation

Placing money in gold, real estate, stocks and cryptocurrencies helps to save the purchasing power of money from inflation.

Keeping funds in the form of cash leads to their gradual depreciation and the loss of their purchasing power. This encourages investment in investment vehicles such as gold, real estate, stocks and cryptocurrencies. With the advent and widespread use of cryptocurrencies, the question of whether they can be a protective mechanism against inflation has become relevant.

In order to be recognized as an instrument of protection against inflation, it is necessary that the type of investment in question allows you to maintain the purchasing power of the money invested in it. In other words, the price of such an investment should increase, or at least not change. The main properties of such investments are their rarity, availability and durability.

Gold as a hedge against inflation

In recent years, gold has ceased to be attractive as a hedge against inflation. During and after the COVID-19 pandemic, the demand for gold did not rise above normal levels. Gold, as before, is considered a reliable investment tool for the long term, but not so reliable when it comes to short terms.

Real estate as a protective tool against inflation

During the 2007 U.S. mortgage crisis, the U.S. housing bubble burst. This gave reason to believe that real estate does not always act as a reliable hedge against inflation.

For a long time, investing in real estate was considered an effective tool to protect against inflation. However, the bursting of the US housing bubble has turned this view upside down. In March 2007, US home sales and prices plummeted. Home sales fell 13% to 482,000 from a high of 554,000 in March 2006, according to data from the National Association of Realtors (NAR).

In the US in particular, and around the world in general, real estate prices depend on factors such as government policy, political and economic stability of the country, demographic and economic processes, geographic location and infrastructure. This market is affected by a lot of parameters, many of which are not obvious to ordinary people.

Stocks as a hedge against inflation

Generally, stocks help in protecting investments from inflation. Short-term declines are just fluctuations in their long-term trend. But not all stocks can serve as a hedge against inflation. You need to choose stocks of companies that have a strong fundamental base and are able to bring high dividends to their shareholders.

Both gold and real estate and stocks are regulated by centralized institutions.

The traditional types of investments listed above are regulated by centralized authorities and regulators, which allows them to influence their pricing and manipulate their value.

The value of assets directly depends on the policies of centralized institutions of power, such as governments and central banks. Investments that depend on the decisions of higher authorities, and which cannot be influenced by the investor, are difficult to identify as reliable.

Bitcoin is an effective inflation hedge due to its limited supply and decentralization. These factors affect its scarcity and sustainability.

To answer the question of whether bitcoin can protect against inflation, consider it through the prism of its limited supply and decentralization.

The supply of bitcoin (BTC) was initially capped at a software level of 21 million coins. Currently, 19 million bitcoins have already been mined. That is, 90% of bitcoins were mined within 12 years from the moment the first cryptocurrency was created.

Decentralization is the Key to Sustainability

The decentralized structure of Bitcoin protects it from the control of centralized authorities. Distributed across thousands of nodes that operate around the world, the bitcoin network is resistant to any external pressures that might try to change its monetary policy and compromise its basic principle of scarcity. In this regard, traditional currencies cannot compete with Bitcoin.

In the traditional system, it is possible to influence the decisions of bodies or organizations by exerting pressure or giving a bribe. In the bitcoin network, this is not possible, since there is initially no central authority that could be influenced, or whose members could be bribed. The founder of bitcoin, Satoshi Nakamoto, is a pseudonym, and it is not known who is hiding under it. Bitcoin continues to be a unique digital asset due to its successful evolution without guidance.

Anyone can check the history of any transactions. Decentralization implies that a cryptocurrency cannot be used twice. Decentralization plays an important role in the distribution of the coin and has helped bitcoin through numerous trials. This allowed bitcoin to prevent centralized control over information and give all coin holders the opportunity to participate in decision making.

When companies interested in bitcoin made attempts to change the block size to increase the number of transactions per block, individual node operators and developers vehemently opposed the proposal. This highlighted the inherent resilience of bitcoin, as economically powerful organizations were unable to impose their will on the network.

5. Comparison of the growth in the value of bitcoin and the growth of inflation

Since the founding of bitcoin, its value has grown faster than inflation.

Investors view bitcoin as a tool to fight inflation, although the goals of individual investors may be different, for example, to make a profit, increase capital, or use it as a store of value. As the exponential rise in the price of bitcoin shows, its value stored in cryptocurrency has grown faster than inflation itself. Even in 2021 — a modest year for bitcoin — the cryptocurrency is up 59.8%, well above inflation in most countries.

The following chart illustrates the rise in the price of bitcoin from October 2013 to March 2022 in USD. 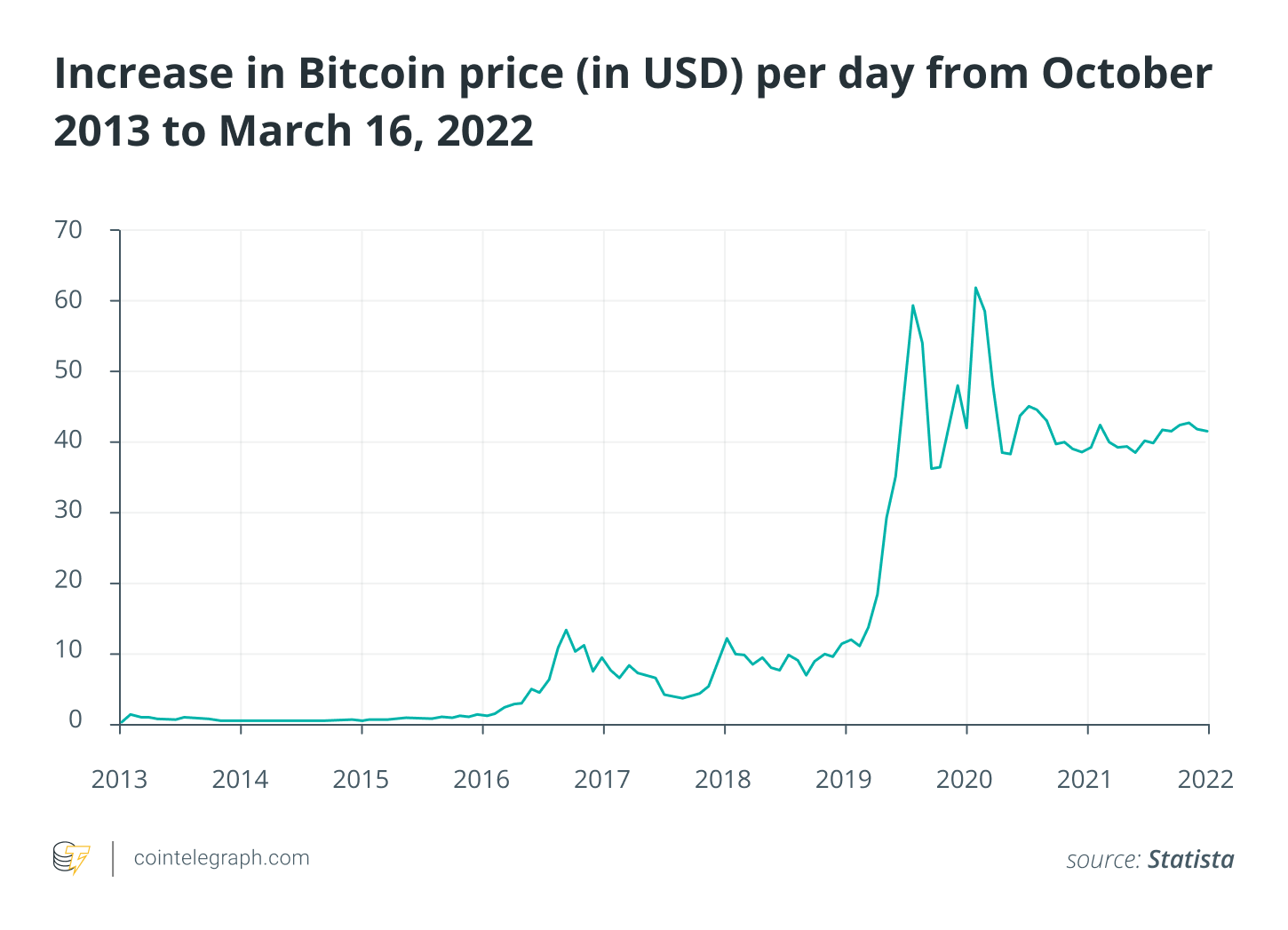 6. Does bitcoin protect against inflation?

The statistics indicate that bitcoin outperformed inflation far better than traditional assets such as gold, real estate and stocks.

Bitcoin as an asset performs very well, coping with inflation and outperforming it by a wide margin. Statistics clearly demonstrate that the return on investment in bitcoin is much higher than in assets such as gold, real estate, stocks and other traditional assets.

The basic principles of bitcoin, such as limited supply and decentralization, allow you to talk about it. How about an asset that can protect against inflation.

The hashrate in the bitcoin network breaks records