Why did NEAR and DOGE rise in price over the weekend?

The altcoin NEAR ended the week with a 30% gain in the top 20 cryptocurrencies. Most of this trend occurred yesterday – Sunday’s rally was provided by the important events of today.

The InnFin conference will start in London in a few hours, bringing together representatives of the British global FinTech sector and world brands of payment systems.

At this event, a lot of time will be devoted to blockchain technologies, in terms of their convenience, security and ways of state regulation. Representatives of Near Protocol will appear there along with VISA. They wrote about it themselves by posting the announcement of the conference on Twitter.

Investors and speculators are betting that there will be new Near Protocol partnerships on the sidelines of InnFin, at least with VISA incubators. The blockchain technology of Ukrainian developers is ideal for payment systems, thanks to the already implemented sharding, processing 100 thousand transactions per second and low commissions.

The burst of activity in DOGE over the weekend has traditionally been associated with Elon Musk. A well-known entrepreneur this time remembered meme cryptocurrency in a Twitter dialogue with Brett Winton. Ark Invest’s R&D director joked about mining and amateurs, receiving a Dogecoin video from Musk that explains it all. 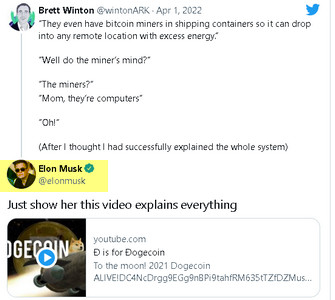 One post was enough for DOGE to rise 5% on Saturday and 4% on Sunday. A wave of purchases allowed the coin to go to zero at the end of the week. Dogecoin declines as Elon Musk’s support ends. The developers of the meme token have not yet been able to offer investors anything of value, except for a successful find in the form of placing the image of a Shiba Inu dog in the coin brand.