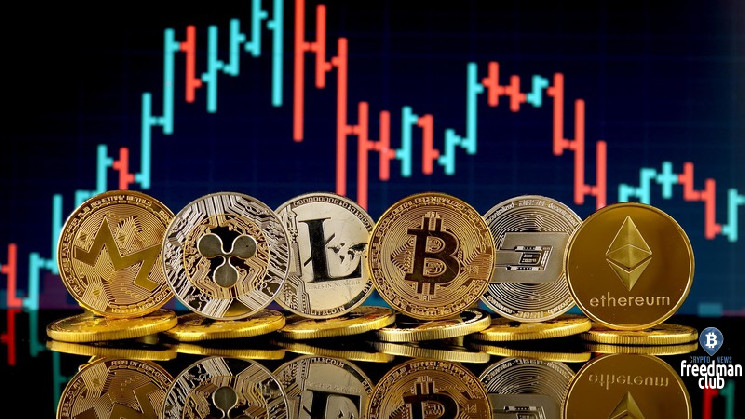 The results of the cryptocurrency market for the past week

This week has been low volatile while some altcoins have made significant gains. BTC is up about 1% over the last week. Ethereum (ETH) and Binance-coin (BNB), the 2nd and 4th largest assets in the market cap table, rose ~9% and ~6% respectively. Other majors, Solana (SOL) and Terra (LUNA), are up ~32% and ~23% over the past week.

Digital asset markets reacted moderately to the release of solid but mediocre employment data by the United States on April 1st. The data showed that while the country’s unemployment rate is falling to pandemic levels, the economy has only added 431,000 new jobs, less than the Dow Jones aggregate estimate of 490,000 but higher than some lower estimates.

According to the general opinion of market observers, these data were in line with expectations. “In general, there is nothing shocking in this report. There was nothing that was really surprising,” Simone Mokuta, chief economist at State Street Global Advisors, told CNBC. “Even if this report were zero, I would still say that this is a very healthy job market.”

Investors are still pondering the labor market data and assessing whether this will lead to a more aggressive change in monetary policy from the Federal Reserve.

With US dollar inflation soaring and the labor market recovering, the Fed’s pandemic-era loose monetary policy is no longer viable. Many call the Fed’s policy of ultra-low interest rates and high stimulus the loosest approach in history. If this continues, it will likely cause the economy to overheat and drive inflation to unmanageable levels.

A move to higher interest rates and zero stimulus is likely to lead to a widespread drop in asset prices. Without the support of accommodative policies, some investors may be risk averse, which will create volatility in the capital markets.

The Fed will make every effort not to shock the markets by raising rates too quickly. However, many market watchers are unsure if this will be possible given historically high inflation rates and other factors such as disruptions to the global supply chain caused by the situation in Ukraine.

For investors in digital assets, while the prospect of a US recession may be worrisome, there are signs that cryptocurrencies could continue to rise as a hedge against inflation. Onchain data shows that the illiquid supply of Bitcoin is close to all-time highs. Despite the uncertain macro environment, long-term BTC holders are holding back and reducing the number of coins available for trading. This supply shock creates positive pressure.

In the altcoin market, when projects such as Ethereum (ETH) and Solana (SOL) have reached key development milestones and interesting integrations, investors are ready to invest in these projects, despite the uncertainty at the macro level. Sol’s strong rise over the past 7 days was driven by the confirmation that OpenSea, the largest NFT crypto market, will be launched on the Solana network.

Miami is hosting one of the largest cryptocurrency conferences. The list of speakers for this event includes President Nayib Bukele, Kathy Wood and Jordan Peterson. Last year at the same conference, Bukele and Jack Mullers made important announcements about the adoption of BTC in El Salvador. Similar fireworks are expected at this year’s conference from Bukele and others.

April 6 – The minutes of the March meeting of the Federal Open Market Committee (FOMC) will be published.

With the release of strong but unimpressive US employment data, all eyes will be on the footage of the Fed meeting, which took place March 15-16, for any hints as to how America’s central bank may choose to approach policy in the coming months. . This meeting will also reveal the idea of ​​the first interest rate hike since 2018, which was implemented in March 2022.

This has been a strong week for many large cap altcoins, continuing a strong month. ETH is up about 8% over the last week on solid fundamentals. On March 28, CME Group announced that it will be offering options on micro-ether futures contracts, allowing small investors to access ETH in a cost-effective way. Also last week, Google searches for “Ethereum merge” reached a new all-time high.

The price of BTC hovered between $44,000 and $48,000 last week, suggesting that these could be key support and resistance levels in the short term. Glassnode data says the capitulation of short-term holders who bought BTC when the price was at an all-time high in late 2021 may be over. This suggests that in the near future the selling pressure will decrease.

In the past few days, Bitcoin has started an upward rally while shaking up most cryptocurrencies at the same time. The world’s most popular crypto asset hit a higher high since March 3 and is trading at $46,500 at the time of writing, up 3.9% over the past 7 days. This bullish stance has formed on the cryptocurrency charts after the aftermath of the situation in Ukraine, which led to bearish forecasts.

The upward movement will break if the price drops below $45,000.