DeFi protocols have become the number one target for attackers

Decentralized finance (DeFi) protocols have become the main source of enrichment for attackers. This conclusion was made by experts from Chainalysis. In the latest report, experts calculated how much hackers have stolen from the crypto market since 2019, as well as which objects have become their targets.

As you can see in the chart below, the biggest payback for digital attackers is in the case of a DeFi hack. In 2021, it was DeFi that was hit the hardest, as of the total $3.2 billion in theft, about 72% of thefts occur in DeFi. 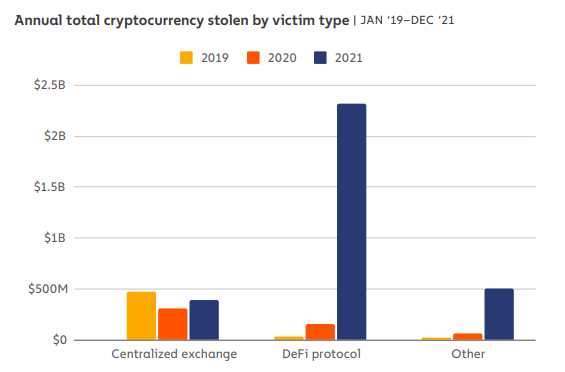 However, this was not always the case. For example, in 2020, hackers were able to steal just $162 million from DeFi. In 2019, even less, less than $100 million. Such a data gap, according to Chainalysis, is explained by the fact that decentralized finance protocols became popular only in 2021.

At the same time, along with popularity, many projects, being anonymous, attracted sponsorship not only from private investors, but also from ordinary participants in the crypto market. The anonymous nature of the projects and the unlimited inflow of capital also played a role in the scale of the theft, experts say.

Read also: What is an exit scam and how to recognize a scam

Thus, the vast majority of capital theft from DeFi is not the cause of hacking, but of the ill-considered use of one or another function in the protocol’s smart contract. Moreover, omissions in the code are also deliberately left, preparing the basis for fraudulent schemes.

Read about how to recognize the signs of fraud in a smart contract in a special article by the BeInCrypto editors.