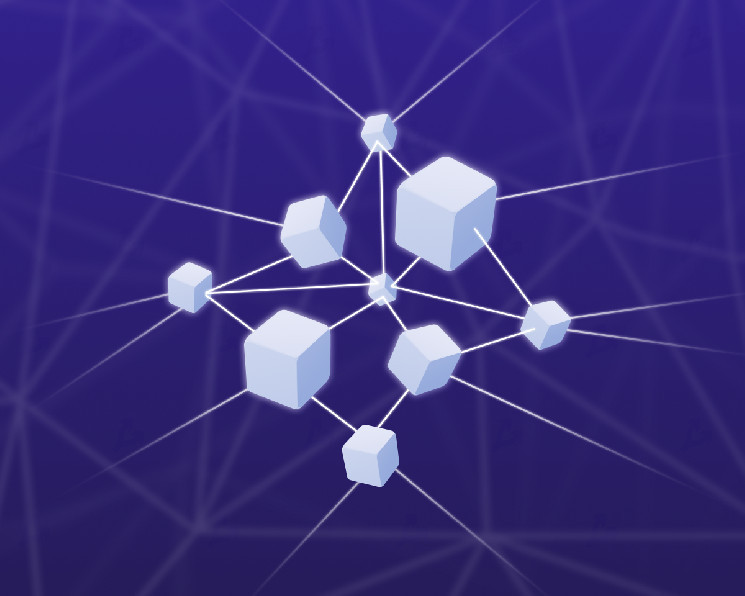 Aave launched the third version of the protocol, and the EU will strengthen regulation of the sector

The decentralized finance (DeFi) sector continues to attract increased attention from cryptocurrency investors. ForkLog has collected the most important events and news of recent weeks in a digest.

The main indicators of the DeFi segment

The volume of funds blocked (TVL) in DeFi protocols rose to $232 billion. The Curve Finance protocol still holds the lead with $21.42 billion. Lido ($20.15 billion) broke into second place in the ranking, and MakerDAO ($15.92 billion ) dropped to third. 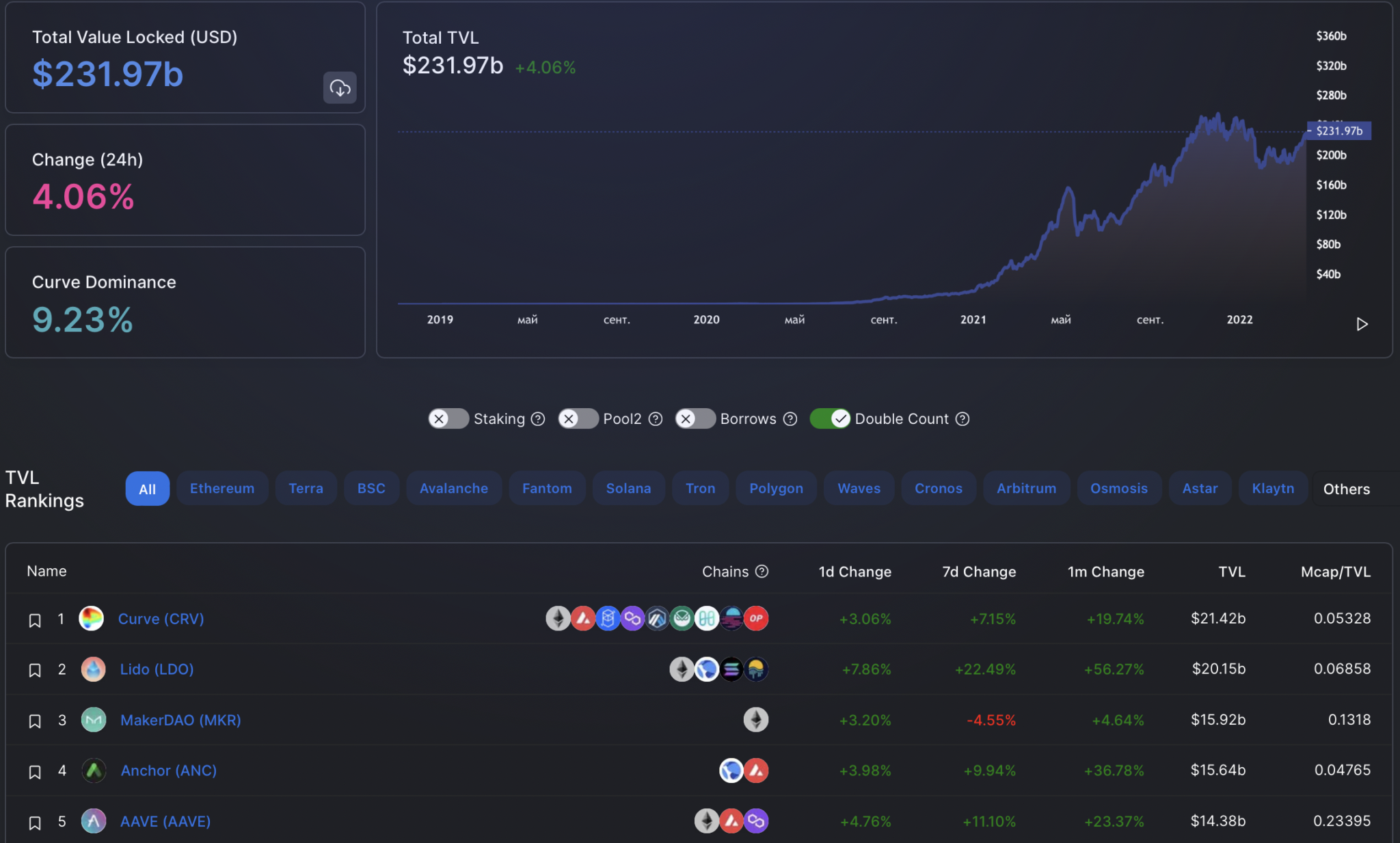 Decentralized exchange (DEX) trading volume over the past 30 days was $63.7 billion.

Uniswap continues to dominate the non-custodial exchange market, accounting for 77.8% of total turnover. The second DEX in terms of trading volume is Curve (6.3%), the third is Sushiswap (6%).

On March 17, DeFi landing platform Aave announced the launch of the third version of the protocol. Since then, the price of the project token has increased by more than 70%.

The market capitalization of the asset has exceeded $3 billion, according to CoinGecko.

According to the developers, Aave V3 is characterized by a higher level of security, as well as improved capital efficiency for users.

The new version has improved cross-chain compatibility. Gas consumption has also been optimized, making transactions “as cheap as possible”.

Implemented “isolation mode”: interacting with potentially high-risk tokens, users can borrow limited amounts of funds. According to the developers, this approach allows you to add many new assets to the platform.

Over-collateralization and regulation will limit the continued exponential growth of the DeFi sector in the coming years. Analysts of Morgan Staley came to such conclusions.

Investment bank experts noted that they did not find much evidence for the thesis that DeFi protocols significantly improve the traditional financial system.

“Projects look like a way to attract cash flows to enrich their operators. DeFi is prone to hacking and the risk of financial crime because of its anonymity,” they wrote.

Absence key/AML will limit adoption among institutionalists, and the integration of these requirements will make DeFi more centralized, the experts explained.

The European Parliament supported amendments to the regulation on the exchange of information between counterparties, which involve the collection of data on users of non-custodial cryptocurrency wallets.

The amendments will oblige cryptocurrency exchanges and other platforms to verify users of non-custodial wallets when conducting transactions with them. At the same time, the de minimis principle does not apply to such transfers, so we are talking about the collection of information in the framework of any transactions, regardless of their volume.

ParaFi Fund Leads Landing Protocol Investment Round Bastionrunning on Aurora, the second layer blockchain platform of the NEAR network. The total amount of fees in Bastion was not named.

According to Bastion’s blog, the project has experienced “explosive growth”. Within the first 24 hours after the launch of the mainnet on March 7, funds in the amount of $200 million were blocked in the protocol.

Parachute project Acalaoperating in the Polkadot ecosystem, announced the launch of the $250 million aUSD Ecosystem Fund to stimulate the use of the Acala USD (aUSD) stablecoin.

The Acala Foundation will provide grants to early-stage projects in the Polkadot ecosystem that work in areas such as decentralized finance, derivatives, payments, and DAOs and use the aUSD token.

The Deus Finance team confirmed the hack, but stated that the funds were safe and promised to reveal the details of the incident at a later date.

According to PeckShield experts, the attacker used instant loans to attack. The hack was made possible by manipulating the oracle that determines the price in the USDC/DEI pair, they found.

After the attack, the hacker sent funds in ETH to the Tornado Cash mixing service.

In total, the hackers withdrew about $11 million in wETH, wBTC, LINK, USDC, wXDAI and GNO tokens.

DEX aggregator Li Finance reported a hacker attack in which 205 ETH (~$591,630) was stolen from 29 wallets connected to the service. The project team closed the exploit and compensated for the losses of most users.

Li Finance said it recovered losses from 25 wallets totaling $80,000. The remaining four wallets account for about $517,000 in stolen funds. The team contacted the address holders and invited them to convert the lost funds into Li Finance angel investments and future Li.Fi tokens.

Service of decentralized oracles Umbrella Network also reported a hack. The attacker used an exploit in staking contracts for liquidity providers of Ethereum and BNB pools.

As a result of the attack, the hacker withdrew tokens from these pools. The project team stated that the attacker sold over 2.2 million UMB on the open market. PeckShield experts estimated damage at $700,000.

The Umbrella Network guaranteed that they would pay compensation to all affected users. The team also stressed that the protocol’s other smart contracts were not affected.

To execute the exploit, the attacker placed a special smart contract on the Fantom platform. Since the script was set to self-destruct, it is almost impossible to determine which vulnerabilities were exploited, the project team noted. To get at least some information, she works with node providers.

After deploying the smart contract, the attacker borrowed 80 million USDC through an instant loan, which he used to manipulate the price of the OShare token in the liquidity pool.

The hacker transferred the stolen funds from Fantom to Ethereum and immediately sent it to the Tornado Cash mixer. Through the same service, he replenished the newly created wallet, which he used for the attack.

OneRing has assured that they are working on a refund plan.

The protocol team offered the hacker 15% of the stolen funds plus 1 million native RING tokens for a refund, although they called this development “unlikely.”