The Waves token is up 67% in a week. What’s happening

The crypto market has been swept by a wave of sell-offs amid risk aversion, and only Waves is going against the trend

Cryptocurrencies are losing ground en masse this morning. Of the 100 largest coins, only stablecoins and the Waves token were in the green zone. At the time of publication, it is trading at $18.85 WAVES has risen in price by 2% in a day, and by almost 70% over the past seven days.

According to CoinGecko, the market capitalization has exceeded $1.88 billion and the average daily trading volume has reached $680 million. Despite the meteoric rise, the token is still 56% below the all-time high reached in May 2021 at $43. 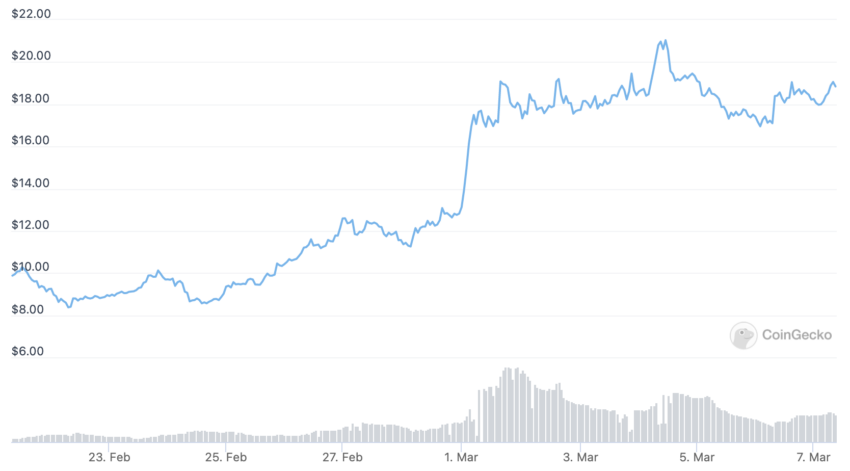 A favorable fundamental background helped WAVES stay afloat, even when other cryptocurrencies went into a downward correction.

Cryptocurrency exchange Binance has allowed WAVES to be used as collateral on the Binance Loan platform. The company announced this in a blog post on March 3. On the same day, WAVES updated the local high at $20.5, and the token trading volume increased by almost 200% over the week.

Along with WAVES, Binance has added MATIC, SLP, and THETA to its lending platform. These coins also strengthened, however, for them, the growth was less stable.

WAVES 2.0 and partnership with Allbridge

The project has announced an upcoming upgrade to WAVES 2.0, which will add compatibility with the Ethereum virtual machine and improve interoperability with other blockchains.

In addition, at the end of February, the project announced integration with the Allbridge multi-chain protocol, which will combine the WAVES blockchain with protocols based on the Ethereum virtual machine (EVM), as well as a number of independent protocols such as NEAR, Solana and Terra.

Waves is an open source blockchain platform launched in 2016. It operates on a proof-of-stake consensus algorithm and seeks to maximize the benefits of technology while leaving a minimal carbon footprint.