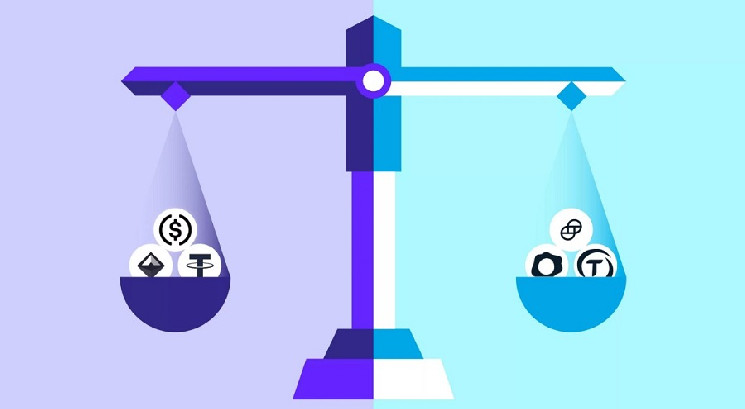 The research division of Bloomberg believes that the market for algorithmic stable cryptocurrencies is growing faster than traditional stablecoins.

Bloomberg Intelligence analysts in the BI Crypto Outlook Report argue for the benefits of decentralization. According to experts, this is due to the fact that the algorithmic stablecoin, which does not have a centralized issuer, is very resistant to regulation.

Algorithmic stablecoins, although a relatively new type of asset in the crypto industry, better overcome the disadvantages that other stablecoins have carried over from the traditional financial world – censorship and the possibility of confiscation by regulators.

“While decentralized alternatives to stablecoins are still in a relatively infancy, they solve one of the industry’s potential bottlenecks—helping the sector protect against potential disruptions,” the report says.

The authors of the report argue that regulation is needed to increase the use of issuers of fiat-backed stablecoins such as USDT and USDC, especially in the banking sector. At the same time, regulatory control can pose a threat to “open and unauthorized DeFi protocols.”

The report says that at the heart of the main principles of blockchain and cryptocurrencies is the need to have an unlimited financial system. At the same time, issuers of fiat-backed stablecoins often have a bad reputation. The issuer of USDT, Tether, for example, is often reproached for “opaque treasury collateral”, which is why the issuer faces constant regulatory pressure.

This is why, according to Bloomberg Intelligence, algorithmic stablecoins, being fiat, represent a viable alternative to regulatory requirements. The algorithm or protocol behind these stablecoins acts like a “central bank”, removing all intermediaries from the equation.

The authors of the report believe that the market is aware of this feature, so there is a significant increase in the value of such assets. Terra USD (UST), issued by the Terra protocol, is up 5,323% year-on-year in 2021. The market capitalization of UST increased from about $0.2 billion to $10.7 billion over the year.

Analysts indicate that USDT has reduced its share of the stablecoin market by more than 50%. At the same time, USDC has significantly increased its market share, the report says. Bloomberg Intelligence emphasizes that it maintains an optimistic outlook for all types of stablecoins. According to analysts, stablecoins, along with bitcoin and ether, are among the few cryptocurrency innovations that will stand the test of time.

ShapeShift said last year that the boom in the decentralized finance (DeFi) industry has led to the development of algorithmic stablecoins that will help reduce market volatility. In February, Kaiko analysts said that gold-backed stablecoins are growing in popularity around the world.