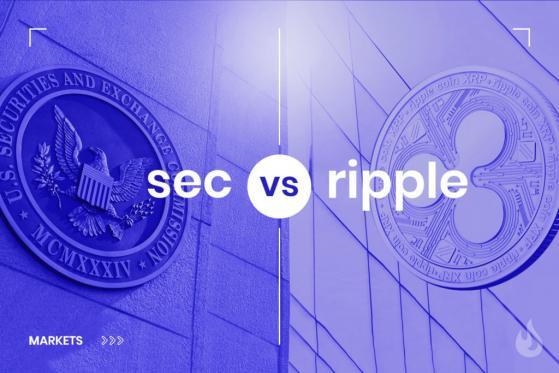 Rumors that the SEC lawsuit against Ripple ends in a settlement are growing.

According to one member of the XRP community on Twitter, the official announcement is expected next week. He claims that the lawsuit, which lasted over a year, ended with the SEC and Ripple coming to an agreement on what the settlement would be. According to the source, all employees working on this case were reassigned.

“Has anyone else heard the rumors? Settled. All employees in the SEC v. Ripple case have been reassigned. A week before the news is published, ”said a Twitter user with the nickname @XRP_Production .

Anyone else heard the rumour? Settled. All staff on the SEC vs Ripple case have been reassigned. A week until the news in public. SEC now hiring to prosecute illegal currencies. The beer in your hand is now champagne. Your VW is now a lambo. The GF that dumped you is calling #XRP

Popular cryptocurrency YouTuber Ben Armstrong said he hopes the rumors are true, commenting on how true the information is.

“I can 100% confirm that I pray that this is true. This has been included in my nightly prayers since October 1,” Armstrong said. .

I can 100% confirm that I am praying this is true. Have included in my nightly prayers since October 1. https://t.co/idpIfrKS10

Meanwhile, in a recent interview with Fox Business, Ripple CEO Brad Garlinghouse said that SEC Chairman Gary Gensler said the agency would lose some of its cases.

“He (the SEC Commissioner) gave an interview yesterday and commented, ‘Hey, we’re going to lose a few cases.’

While it’s unclear if Gensler is referring to the Ripple affair, his comments tend to be related to the blockchain company.

“I met with Chairman Clayton, I met with the SEC commissioners, no one ever said: “XRP is a security.”

«I was meeting with Chairman Clayton, I met with SEC Commisioners, no one ever once said ‘XRP is a security’.» -BGarlinghouse

Meanwhile, Ripple, XRP holders, and the crypto ecosystem are awaiting the upcoming decision of Magistrate Sarah Netburn on the SEC’s motion for review.

The U.S. Securities and Exchange Commission continues to struggle with the preparation of relevant documents relating to former SEC member William Hinman’s 2018 speech on ether.

John Deaton, the founder of CryptoLaw and the attorney representing 65,000 XRP holders in the SEC lawsuit against Ripple, has previously said that this will be the most important decision in the case.

The lawyer appears optimistic about the outcome of this ruling and the upcoming ruling on Estabrook’s records, as he shared his predictions on Twitter.

“I’m going to take a risk and predict that Judge Netburn will deny the SEC’s request for a review, upholding his decision that 63 Hinman speech emails be prepared. I am also going to predict that Estabrook’s notes on the meeting with Roizman should also be handed over.”

In January, he said that among the 63 emails, most likely were recordings from meetings with third parties, including Ethereum’s Joseph Lubin and heads of ConsenSys and the VC Working Group. This amount of evidence may ultimately tip the scales in favor of the defendants.

Deaton also noted that a complete victory is not far off, and this proposal could be key in bringing the SEC to the negotiating table and ending the XRP lawsuit.

«[Гэри Генслеру] reported that Ripple could achieve a complete victory. This makes Judge Netburn’s decision to reopen the case all the more significant. Only when and if the SEC is forced to hand over Hinman’s 63 letters of speech (and possibly other notes) will the SEC enter into discussion (if that happens).”