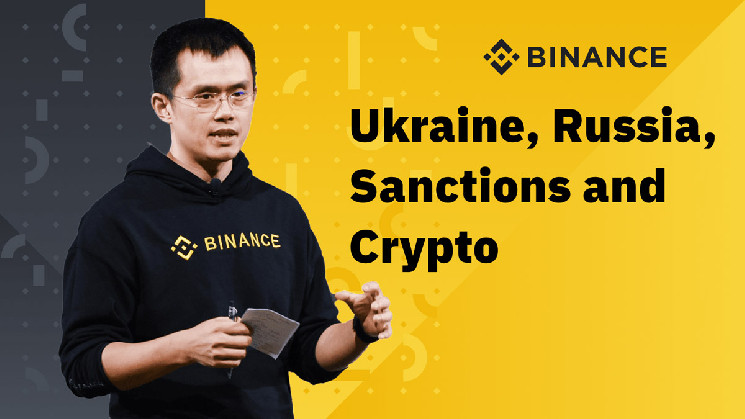 Now this is a hot topic, but there are many misunderstandings. Very few people have a deep understanding of all four directions. I don’t claim to be one of them. Here I will share what I think I understand.

Firstly, I want to say that I am very sad, angry and painful to watch the news from Ukraine. This is a terrible humanitarian crisis – I never thought I would see this in the modern age. The Binance team is working hard to help people in and around Ukraine. We have already made donations to help children, refugees and people in need.

“Binance does not enforce sanctions.” Nothing could be further from the truth. Binance strictly follows international sanctions rules. At Binance, we have assembled a dedicated global compliance task force that includes world-renowned sanctions and law enforcement experts such as Tigran Ghambaryan, Matt Price, Nils Andersen-Reed, and most recently, Chagri Poyraz. They work tirelessly to enforce the sanctions rules. More on this later.

“Banks apply sanctions, but Binance does not.” Again, nothing could be further from the truth, Binance applies the same sanctions rules as banks, in line with international standards.

Now some of the common (and misleading) questions.

Why doesn’t Binance go further and impose sanctions/freeze the assets of all Russian users?

The most important point: we do not believe that we have the authority to do so. Decisions on sanctions are made at the highest levels of government, with the support of legislatures, law enforcement and even the military. We do not believe it is right for companies or platforms to unilaterally decide to freeze the assets of user groups. There are normal Russian citizens in London, New York. Should the head of a bank in London have the right to unilaterally decide to freeze the assets of these people? On what basis? Just because they disagree with the president of their country? What happens if they also disagree with the head of another state in another country? Should they have the right to freeze all the assets of the citizens of that other country? How will it end? This is why we believe we should follow international sanctions rather than invent our own.

Another reason why Russia will not want to use cryptocurrencies is that they are too easy to trace. And governments around the world are already very good at tracking them down, look at the Bitfinex hack story for example.

Would they use private coins? No, they are even smaller. The largest private coin, Monero, has a market value of $3 billion. Russia’s GDP is $1.5 trillion.

Let’s assume that after all this, Russia still wants to use cryptocurrencies. Will the imposition of sanctions against several international crypto exchanges affect this? No. There are tens of thousands of small exchanges around the world, many of them located in Russia. Most users are “dispersed” (using more than one platform). The cost of switching between exchanges is low. Is their low liquidity a problem? No: If users are forced to go there, liquidity providers and arbitrage traders will provide liquidity immediately. Restricting a few major international exchanges does little to nothing.

I hope this clears up a number of misconceptions and misunderstandings that exist on this subject.

As for Binance, we take sanctions very seriously. Our compliance team has more than 500 people worldwide, and almost half of them are directly involved in the work of sanctions control, including anti-money laundering, name verification, Know Your Customer procedure and network monitoring.

We have very clear standard operating procedures in place in case we identify risky transactions related to sanctions. These include account restrictions, suspicious activity reports, requests for access to personal data, and the transfer of assets to law enforcement.

There is not a single cryptocurrency team in the world with such a level of expertise.

The team and processes described above are literally working 24 hours a day to introduce new sanctions against Russian individuals and legal entities. One surprising fact: we have carefully studied all the sanctions lists and at the moment have applied them to only one person. Wait – just one? Yes, one. And that’s why.

The reason this number is so low is because we use bank-grade tools, notably Refinitiv Worldcheck, which is the gold standard for anti-money laundering, name checking, and sanctions control.

Politically Exposed Persons (PEPs) are identified on Binance BEFORE they go public. Most of the newly sanctioned individuals would have been flagged as PEP and therefore denied access to our platform long before they could trade at all. This includes the protagonists, their lawyers, family members and employees – the people who are trying to use to open fraudulent accounts.

We believe that only through an effective customer identification program can the sanctions and risk associated with Specially Designated Nationals be mitigated.

All this leads to the fact that – contrary to popular belief – cryptocurrencies are not an effective tool for illegal activities.

In other words, cryptocurrencies can be fully tracked on the blockchain using network analytics. Due to the number of regulatory and technology partnerships that Binance has in the industry, the exchange remains one of the main advocates in the crypto industry for combating money laundering and terrorist financing.

In total, over the past three years, we have deleted approximately 20,000 accounts that we determined were at high risk for PEP or international sanctions.

In addition, we use sophisticated systems to track their money, because, as I said, blockchain and cryptocurrencies are not suitable for money laundering. We use network monitoring tools such as Elliptic, Ciphertrace, Chainalysis and TRM to ensure that illicit funds with a possible sanctioned background are identified and appropriately restricted.

Cryptocurrencies are not suitable for money laundering for several reasons.

First, the KYC procedure is tough. Secondly, you simply cannot transfer millions of dollars into cryptocurrency without people noticing it, and thirdly, it can be tracked.

Look at the Bitfinex hack. Theoretically, you can steal $3.6 billion worth of bitcoin, but then you can’t use it without getting caught.

The fact remains that the traditional financial system is much more prone to money laundering and sanctions violations than cryptocurrencies.

Thus, I have expressed myself clearly. We comply with the requirements of sanctions, and cryptocurrencies do not help to circumvent sanctions.

So, should Binance unilaterally block cryptocurrency for all Russians? Let me ask in a different way. Should a coffee shop in Paris refuse to serve a Russian customer? Or take his wallet?

The answer to this question is no. We are not going to unilaterally freeze the accounts of millions of innocent users.

Of course, if governments introduce new sanctions that include shutting down users, we will follow them just as aggressively. In addition, we have formal and informal joint task forces with various governments and regulators around the world providing advice on the best prospective procedures. We are always happy to cooperate with any government that wants to work with us.