Russians are behind the growth of bitcoin – expert opinion

Many members of the crypto community believe that Russians are behind the growth of bitcoin in late February – early March 2022. The editors of BeInCrypto decided to study the arguments of representatives of the crypto industry

On February 24, 2022, Russian President Vladimir Putin, against the background of the recognition of the Donetsk People’s Republic and the Lugansk People’s Republic, signed a decree on the launch of a special operation in Ukraine. Bitcoin reacted to the news by falling. However, by the end of the month, the cryptocurrency corrected and went up. Many members of the crypto community believe that Russians are behind the positive dynamics of bitcoin.

“Bitcoin is up 18% today. What the hell is happening, ”Lark Davis, an analyst popular in the crypto community, wrote on March 1, 2022 in his microblog.

His subscribers were quick to share their opinion about what was happening. Many readers of Lark Davis’ microblog believe that it is the Russians who are pushing the bitcoin rate up. Netizens explained their point of view by the fact that against the backdrop of sanctions pressure and the fall of the ruble, citizens of the Russian Federation are forced to withdraw money from banks and buy cryptocurrency. 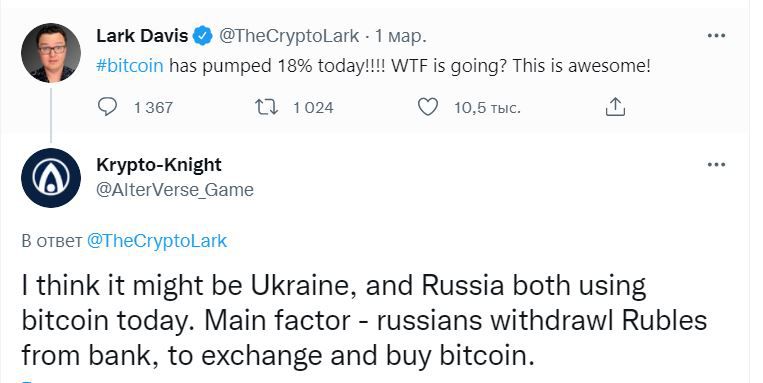 “Russia, a country with 140 million people, has been cut off from the global financial system. At the same time, the national currency of the Russian Federation depreciated. I think the changes will push Bitcoin and the entire crypto market to growth today.”

In his opinion, bitcoin will help ordinary Russians cope with the sanctions pressure.

“Western money transfer companies are blocking services in Russia. This will hit not the oligarchs, but ordinary people. Need [простых людей] in bitcoin is obvious!” — wrote Lark Davis in his microblog.

A similar point of view is shared by Chinese journalist Colin Wu. He believes that the escalation of the political conflict between Russia and Ukraine has contributed to the adaptation of cryptocurrencies in the world. 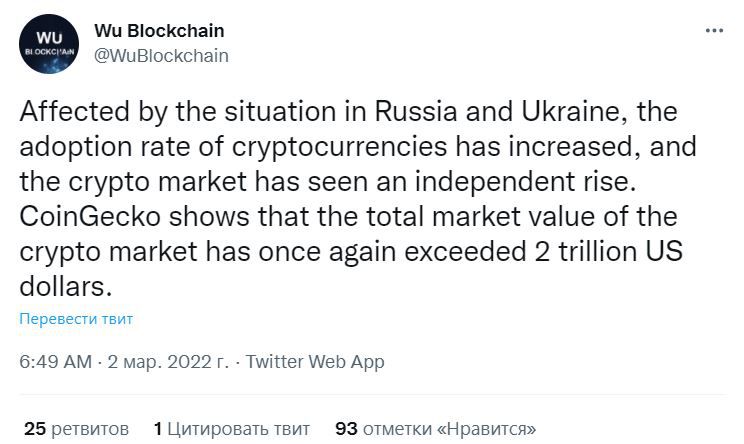 Many netizens are convinced that Russia has been preparing for bitcoinization since the beginning of the year. Members of the crypto community explain their point of view by the active work of local authorities on the formation of legal norms for a new financial instrument.

Recall that 2022 began for the Russian participants in the crypto community with the news that the Russian Federation has chosen to move towards the legalization of cryptocurrencies.

Speculation that the Russians are behind the rise of bitcoin has sparked many conspiracy theories online:

“Why did Russia first announce a movement towards the legalization of cryptocurrencies, and then start a military special operation on the territory of Ukraine, a country that has become one of the centers in terms of the number of bitcoin owners?” asks a netizen under the nickname Elja𝕭oom.

Recall, according to analysts from Chainalysis, Ukraine is in the top 5 countries around the world in the cryptocurrency adaptation rating.

Earlier, the editors of BeInCrypto figured out which crypto companies announced sanctions against Russia.