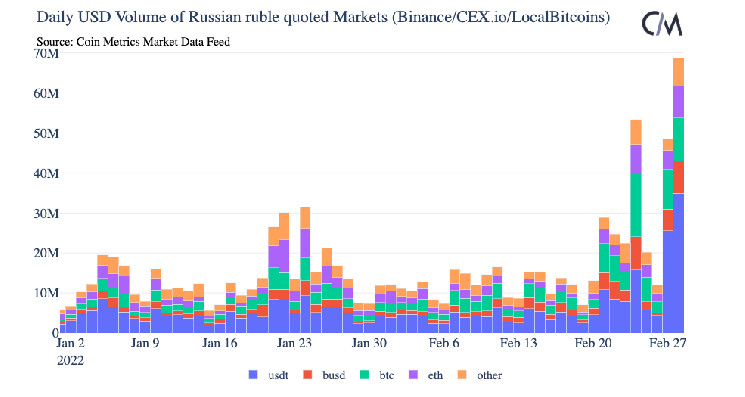 With geopolitical instability, the importance of Bitcoin increases dramatically

BTC quotes initially collapsed after the first news about the start of Russia’s “special operation” on the territory of Ukraine around 03:00 UTC on February 24, falling from $37 thousand to $34.35 thousand. But in less than a day, BTC regained its positions and rose to its highest level. recent weeks. Most other crypto assets also followed a similar pattern: ETH quotes initially collapsed, but in the end, the second cryptocurrency ended the day in positive territory. 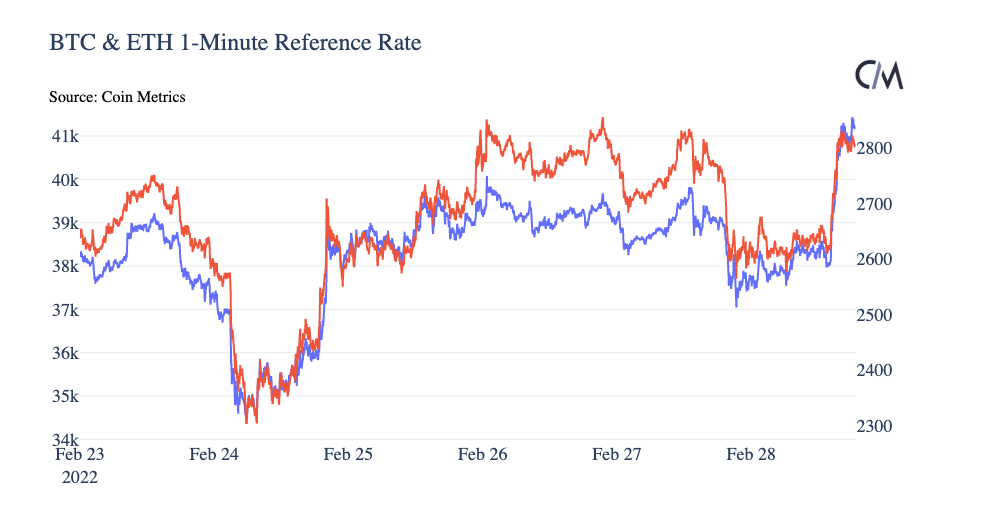 Stocks and other asset classes also tumbled at first but bounced back on the 24th, with stocks like Apple (AAPL) and Tesla (TSLA) holding up relatively well. Overall, the S&P 500 (SPY) has moved relatively in sync with BTC over the past week. But on Monday, Feb. 28, BTC began to split, rising by about 10% on the day, while the S&P 500 fell. 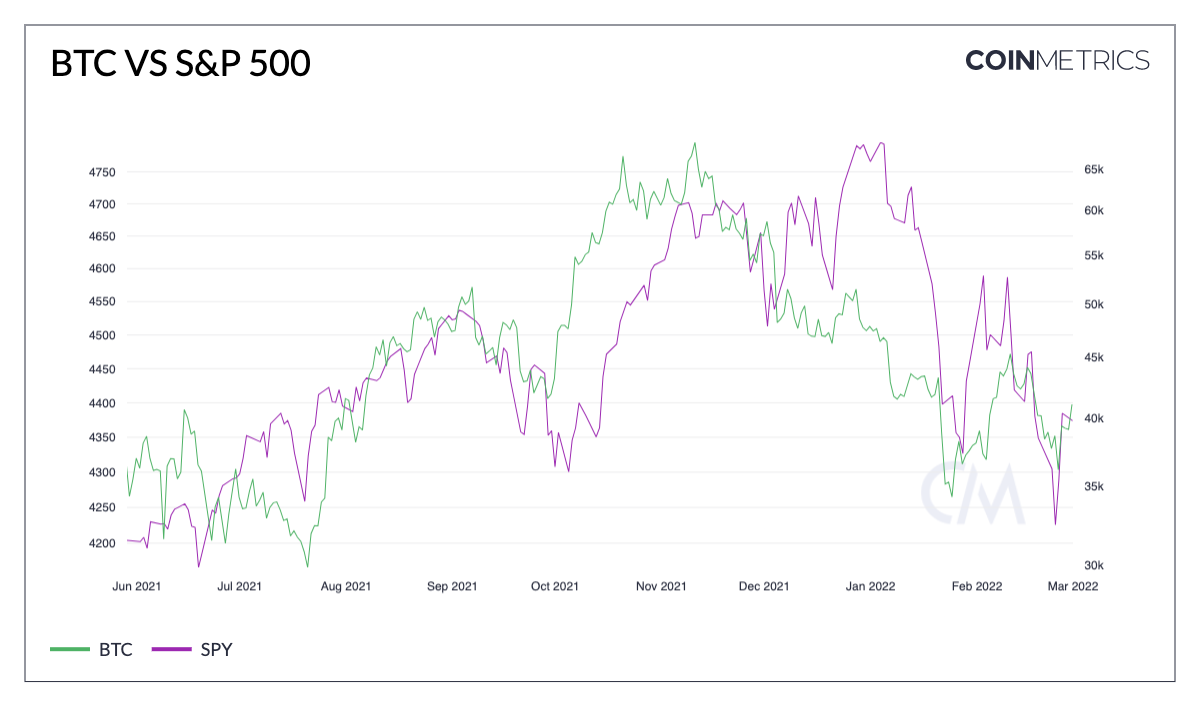 The correlation between BTC and the S&P 500 (SPY) rose to its highest level in the last week (there are many different ways to calculate the correlation, the chart below shows Spearman’s 90-day running correlation). This suggests that BTC and stocks are still partly driven by the same underlying factors. Both markets collapsed at the beginning of the year as runaway inflation led to expectations of a series of rate hikes in 2022. But some investors now seem to believe that the upcoming rate hike may be less severe. 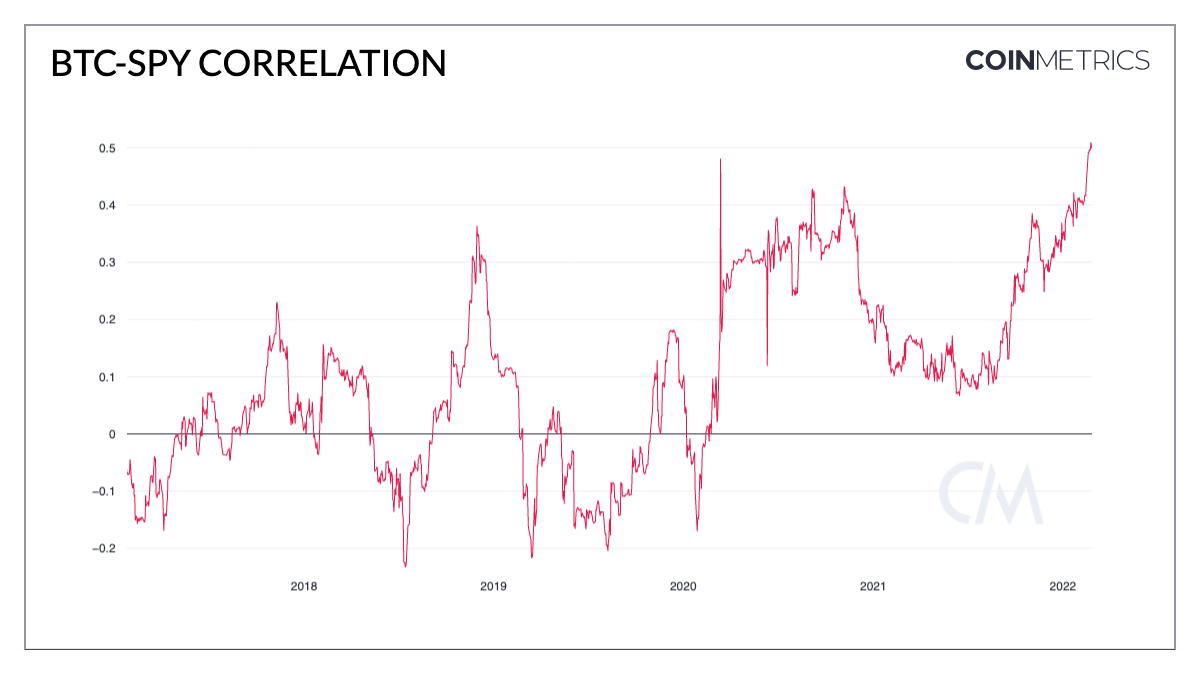 In addition to macroeconomic conditions, the narrative about BTC and other crypto assets is also changing. With many Ukrainian and Russian citizens unable to rely on their traditional banks due to disruptions and new sanctions, more and more people are beginning to realize the importance of having censorship-resistant assets that can be transferred around the world without relying on traditional financial channels. .

Due to the fact that the Central Bank of Ukraine has limited electronic money transfers, many Ukrainians have turned to cryptocurrencies. BTC and other crypto assets are much easier to move than physical assets like gold and can be stored on their own without the need for any bank or third party, which becomes extremely important when you may need to move at any given time.

Trading volume on crypto markets quoted in Ukraine’s local currency, the Ukrainian hryvnia, has risen sharply over the past week. 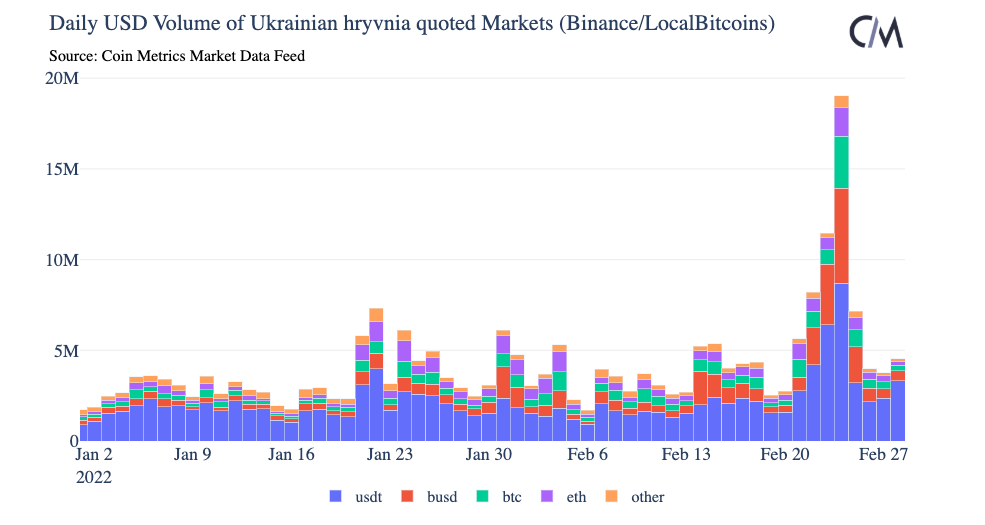 The chart below shows markets paired with hryvnia on Binance and LocalBitcoins for BTC, Ether (ETH) and stablecoins such as Tether (USDT) and Binance USD (BUSD) since early 2021. Since the beginning of the “special operation”, the volume of trading in these markets has grown to one of the highest levels in history. Trading volume on Kuna, a popular exchange in Ukraine, has also reportedly increased dramatically. 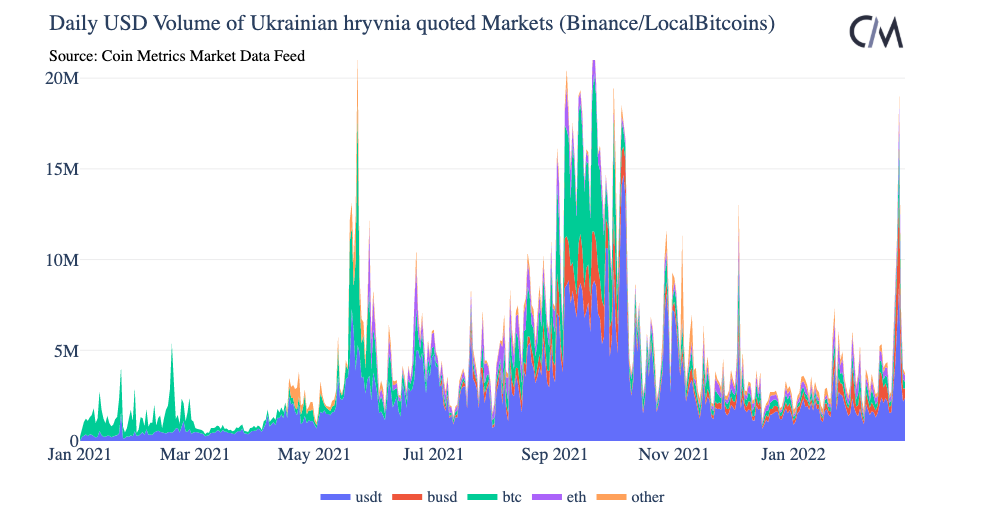 Similarly, Binance, CEX.io, and the Russian ruble-listed LocalBitcoins markets have seen an increase in volume since the 24th.

As the US and other countries began imposing sanctions on Russia’s central bank, the ruble (RUB) has plummeted, leaving many Russian citizens desperate to convert their money into BTC and US dollars. 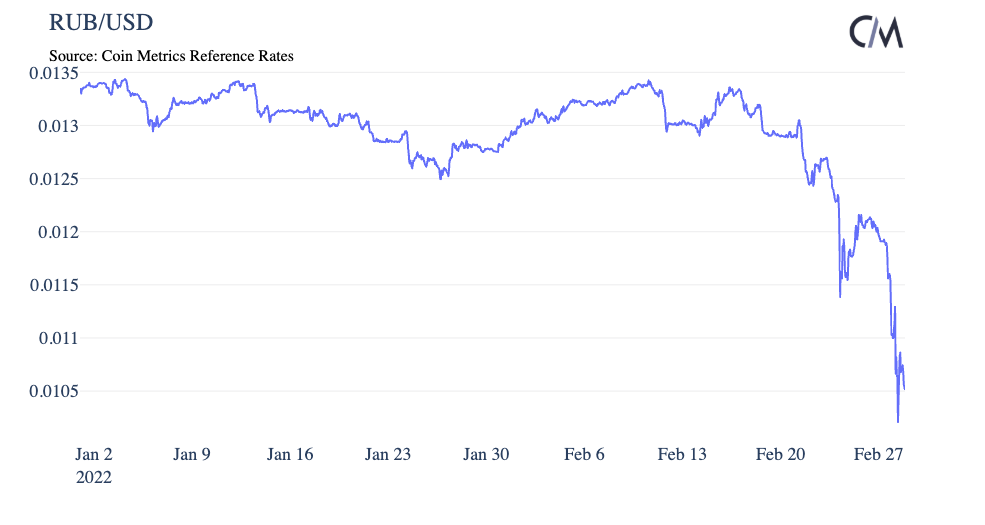 Demand for stablecoins on Binance, which is reportedly the most popular exchange in Russia, has also increased. USDT-RUB trading volume on Binance has risen sharply over the last week, with the largest increase occurring in the past two days as the price of the ruble has plummeted. 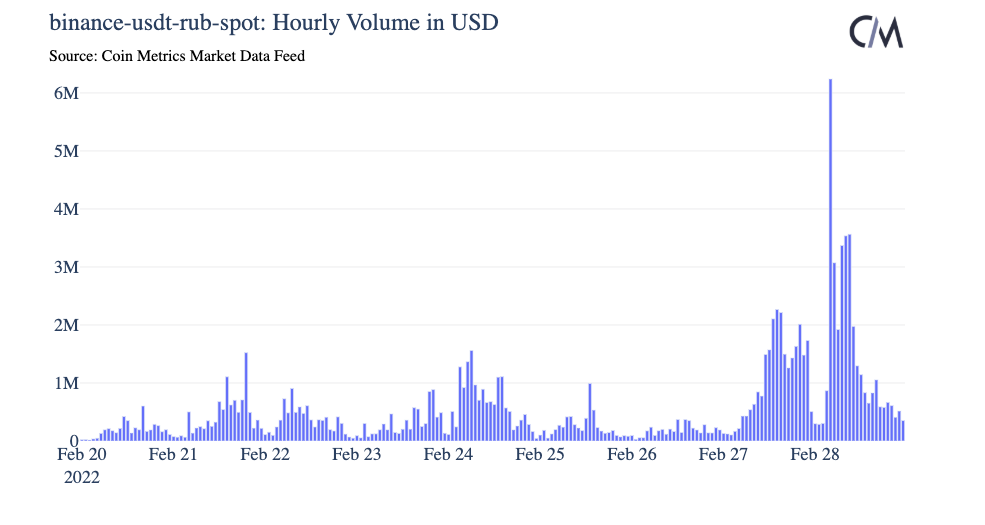 USDT ruble volume on Binance yesterday was $35 million, a one-day all-time high for the market. 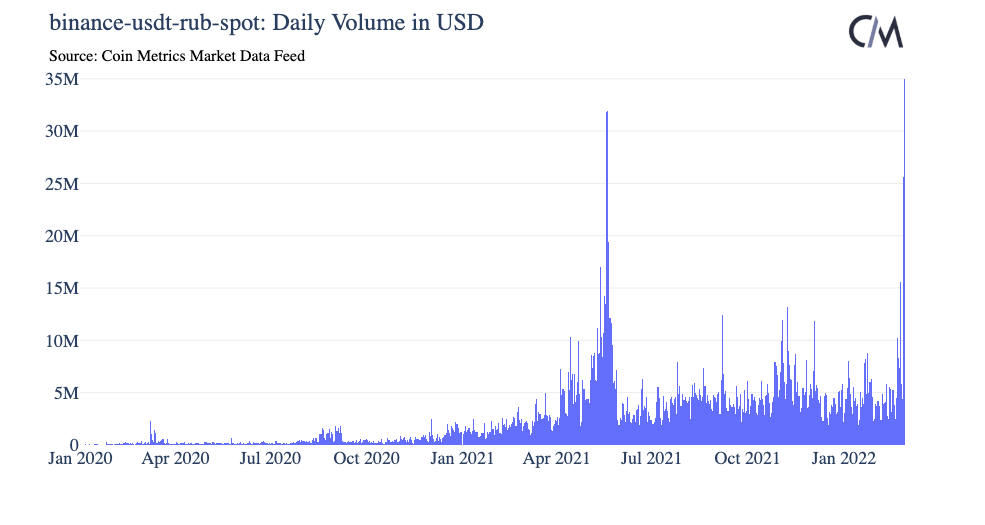 After the start of Russia’s “military special operation”, Ukraine announced a fundraiser in cryptocurrencies to support the country and its citizens and has collected more than $15 million in donations at the time of writing. Thus, cryptocurrencies once again loudly established themselves as a highly effective way to collect donations that can be transferred anywhere in the world.

At the same time, the importance of Bitcoin is also growing because many citizens of Ukraine and Russia have lost access to their traditional banking systems – as an asset that can be stored independently, easily transported and used without the need for a third party or a bank. Undoubtedly, cryptocurrencies will continue to play an increasingly important role in a rapidly changing world.