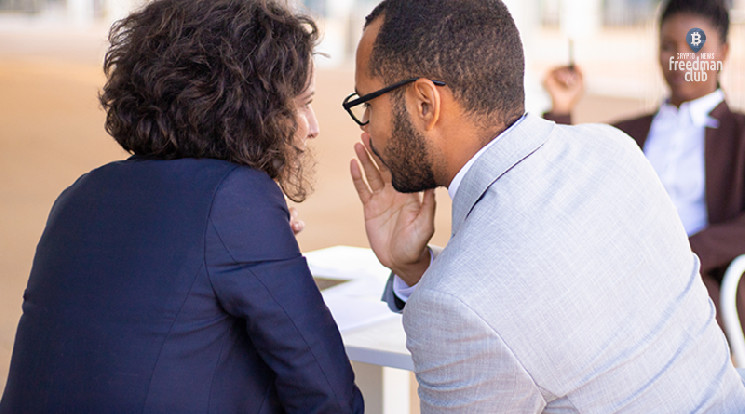 What is insider trading and why is it illegal?

Posts mentioning insider trading usually cheer up investors and traders, but why be careful?

No one knows for sure where the price of one or another asset will go. Perhaps this or that news will affect, or the technical analysis will turn out to be correct, but there is always a chance to make a mistake and lose money. The only way to be absolutely sure is to have personal information from someone in the company or project that is not made public. When this personal information is used to trade assets on the market, this phenomenon is called insider trading.

Who is an insider?

To understand the legal implications of being an insider or engaging in insider trading, you need to understand what an insider is. There are two ways to classify a person as an insider.

First, and this is more commonly known, when someone has access to sensitive, non-public information about a company. Thus, they become insiders. Regardless of whether they were told this information about someone else or found out themselves, they will be called insiders anyway.

Secondly, when someone owns more than 10% of the company’s shares. Thus, directors of companies and other high-ranking corporate executives become insiders.

Which parties are involved in insider trading?

Like any other transaction, insider trading requires more than one party as it is an information transaction. These sides can be divided into three, but sometimes they intersect:

Sometimes the insider who owns the information uses it for his own benefit, so the second and third parties may very well be the same person.

Insider trading can be carried out both in accordance with the law and in violation of the law. These are known as the two types of insider trading, although the illegal type is more commonly known.

Legal insider trading is when the second type of insider trades (someone who owns more than 10% of the company’s shares). Thus, this type of trading is quite common and occurs on a weekly basis in the stock market. As long as directors and/or directors of companies report their transactions to the Securities and Exchange Commission, their activities are legal. These reports include disclosure of their shares, their transactions and any change in share ownership.

When the CEO of any company or business buys back shares in his or her firm, or when other employees of the same company purchase shares in the company they work for, this is considered legitimate insider trading. The purchase of shares by the CEO can often affect the price fluctuations of the share itself.

Warren Buffett, who trades shares of Berkshire Hathaway companies, is an example of legal insider trading.

When some of the important information about a company is not yet publicly available, insider trading is considered illegal and carries severe penalties, including heavy fines and jail time. Any information that could have a material effect on the value of a company’s shares is considered material information.

Clearly, access to such knowledge can influence an investor’s decision to buy or sell a stock, giving them an advantage over the general public, which is unfair under SEC rules and therefore illegal.

Martha Stewart’s ImClone transactions in 2001 are a perfect example of illegal insider trading.

Why is trading insider information illegal?

It is clear that insider trading is illegal because it gives some people an extremely unfair advantage over others. This allows the “insider” to artificially influence the value of the company’s shares.

Obviously, the reason insider trading is considered illegal or illegal is because it unfairly gives the insider an advantage in the stock or crypto market. It also puts the insider’s interests ahead of those to whom he has certain fiduciary duties and allows the insider to influence the value of the company’s shares.

As the value of Bitcoin and Ethereum has skyrocketed in recent months, a huge number of new traders have entered the decentralized cryptocurrency market, especially stock and forex traders who have moved to the cryptocurrency market in hopes of making a profit. Along with the new influx of traders, some of the traditional day trading methods used in the stock markets, such as breakout tactics and scalping, have also migrated with them to the crypto market. Typically, this is not much of a concern. However, one particular stock market strategy that is popular among intraday traders is front running.

The reason that front-running is bad is because these leaders use cryptocurrency exchanges, pulling huge sums of money, up to hundreds of millions of dollars, from the Ethereum trader’s transaction network.

What does frontrunning mean? 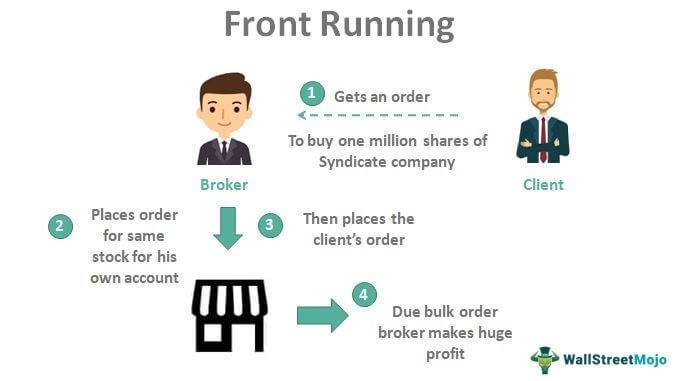 When a trader takes full advantage of an insider “hint” or secret information about an upcoming transaction that will have a significant impact on the price of a particular cryptocurrency, this is called leading.

Essentially, traders buy or sell a cryptocurrency based on prior non-public data and information that they expect will affect its price. Thus, the trader has an advantage not only over other traders, but also over the market as a whole, since the information on which he bases his decision is not publicly available. This is why being ahead is a form of market manipulation and qualifies as insider trading.

So how does front-running happen on a cryptocurrency exchange?

In the world of cryptocurrencies, the concept of being ahead is similar to the stock market. But the approach is different. Bots, which are computer programs, are used to automate transactions in the cryptocurrency industry to make trading easier. Proactive bots automatically synthesize and evaluate market information and do the best for investors.

Users who use the advance launch technique use bots to bypass the queue and charge a higher transaction fee for placing an order, and the trader who started the transaction has no choice but to pay a price they did not expect, thereby facing at a loss.

How can you avoid frontrunning?

The attraction of leading trades lies in the large profit margin when making large trades. Instead of doing many large transactions at the same time, users can split their transactions, thus reducing the attractiveness of exchanges for advanced bots due to the decrease in the value that can be mined.

The stock market is not the only trading floor suffering from illegal insider trading. Similar cases of lead have been noted in crypto trading. 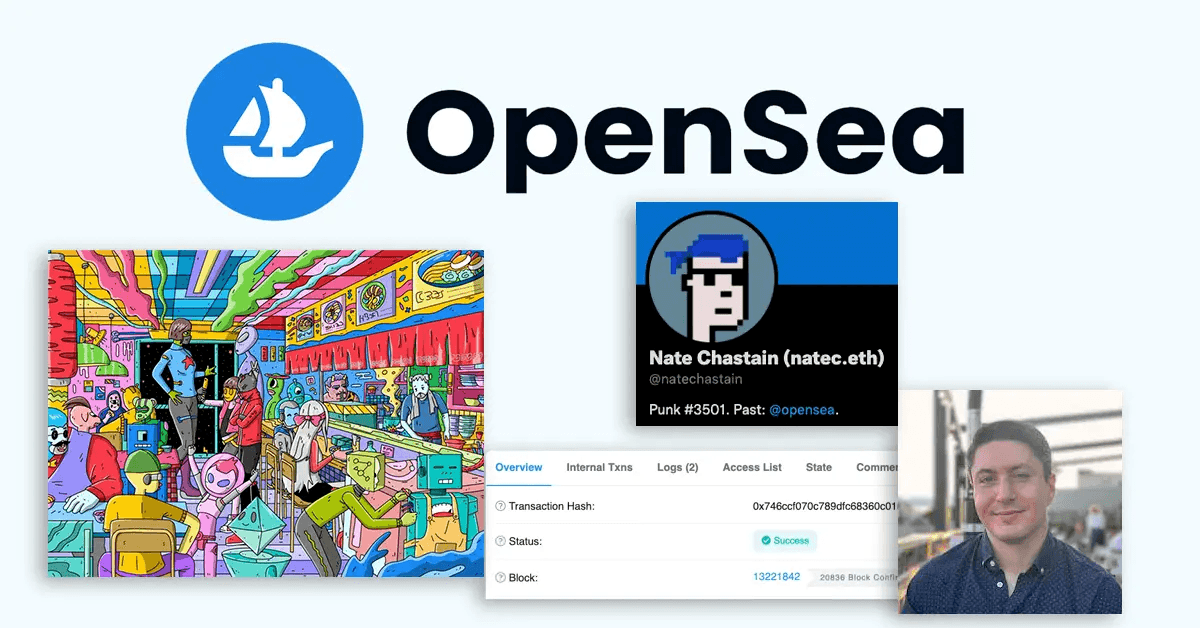 In September 2021, a 31-year-old man from Brooklyn named Nate Chastain was attacked by angry pixelated cartoon and monkey avatars internet fans who claimed he used unethical methods to acquire tokens at a low price and then resell them.

Chastain, the top manager of the world’s largest non-fungible token exchange, OpenSee, has been accused of using his position to make a profit. He lost a stable job and faced likely legal problems.

Zuwu, a Twitter and OpenSea user, noticed that the blockchain data that shows all transactions showed that the wallet associated with Chastain’s avatar was buying various NFTs shortly before they were posted on the OpenSea homepage. They were then sold at an inflated price. Zuwu’s tweet went viral and a few hours later OpenSea confirmed Chastain’s violation, calling it very upsetting.

No law enforcement agency charged Chastain with any wrongdoing, and he made no public attempt to explain what happened. However, at the very least, he could get in trouble with the law. While the SEC has yet to rule on whether NFTs can be considered securities under the 1933 Act, Gensler could try to prove that this amounts to securities fraud and bring a civil action against him. Even if the SEC decides not to pursue the matter, other federal agencies may be interested in investigating Chastain.

While insider trading is an obvious threat to the stock market, it is less obvious to cryptocurrency exchanges. Perhaps this is due to the young age of cryptography in general, or perhaps the security and decentralization offered by blockchains. Either way, insider trading can hit any market where trading is allowed.