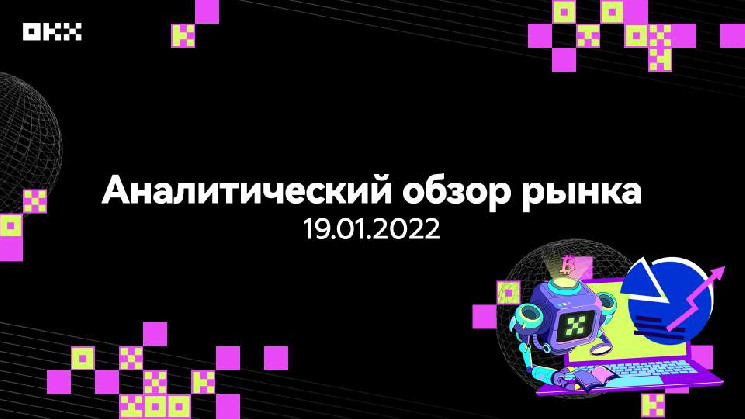 
The main news of the cryptocurrency market over the past week, the top leaders of growth and decline, as well as an overview of changes in the cost of BTC and ETH in today’s market analysis.

It was revealed this week that the mayor of Rio de Janeiro plans to invest 1% of the city’s treasury reserves in BTC. Eduardo Páez commented on Rio Innovation Week during a panel discussion with Francis Suarez, pro-cryptocurrency mayor of Miami.

Rio de Janeiro’s finance and planning minister said the legal framework needed to be “examined” in order to offer rebates on tax payments made with BTC. The Brazilian city will be the first in the country to hold BTC on its balance sheet.

About how these and other events affected the value of cryptoassets – in the weekly review.

TOP of the most profitable and lost altcoins in price: MXC is the absolute leader

The leader of the top most profitable altcoins this week led the crypto asset of the MXC project (MXC) with a growth of 23%. The daily trading volume of this asset averages $31.93 million. 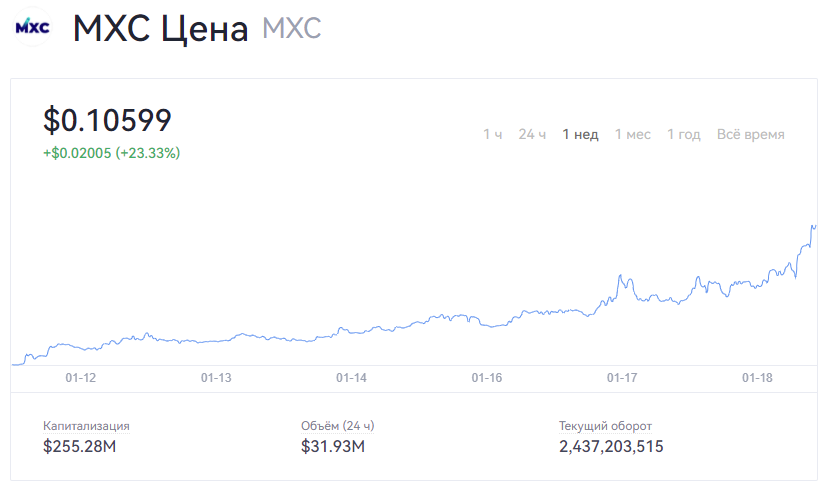 MXC is the leader of the TOP of the most profitable altcoins of the week.
Source: OKX

MXC (MXC) is a crypto asset associated with the Internet of Things (IoT) industry. Using the sophisticated Machine eXchange Protocol (MXProtocol), MXC acts as a bridge between wireless IoT sensors and uncontrolled blockchains.

MXC supports billions of device transfers every day, with a focus on user adoption and integration. As part of the development of the IoT LPWAN network, cryptoassets provide more frequent, efficient data transmission over long distances. MXC sets the global IoT standard for individuals, businesses and smart cities. 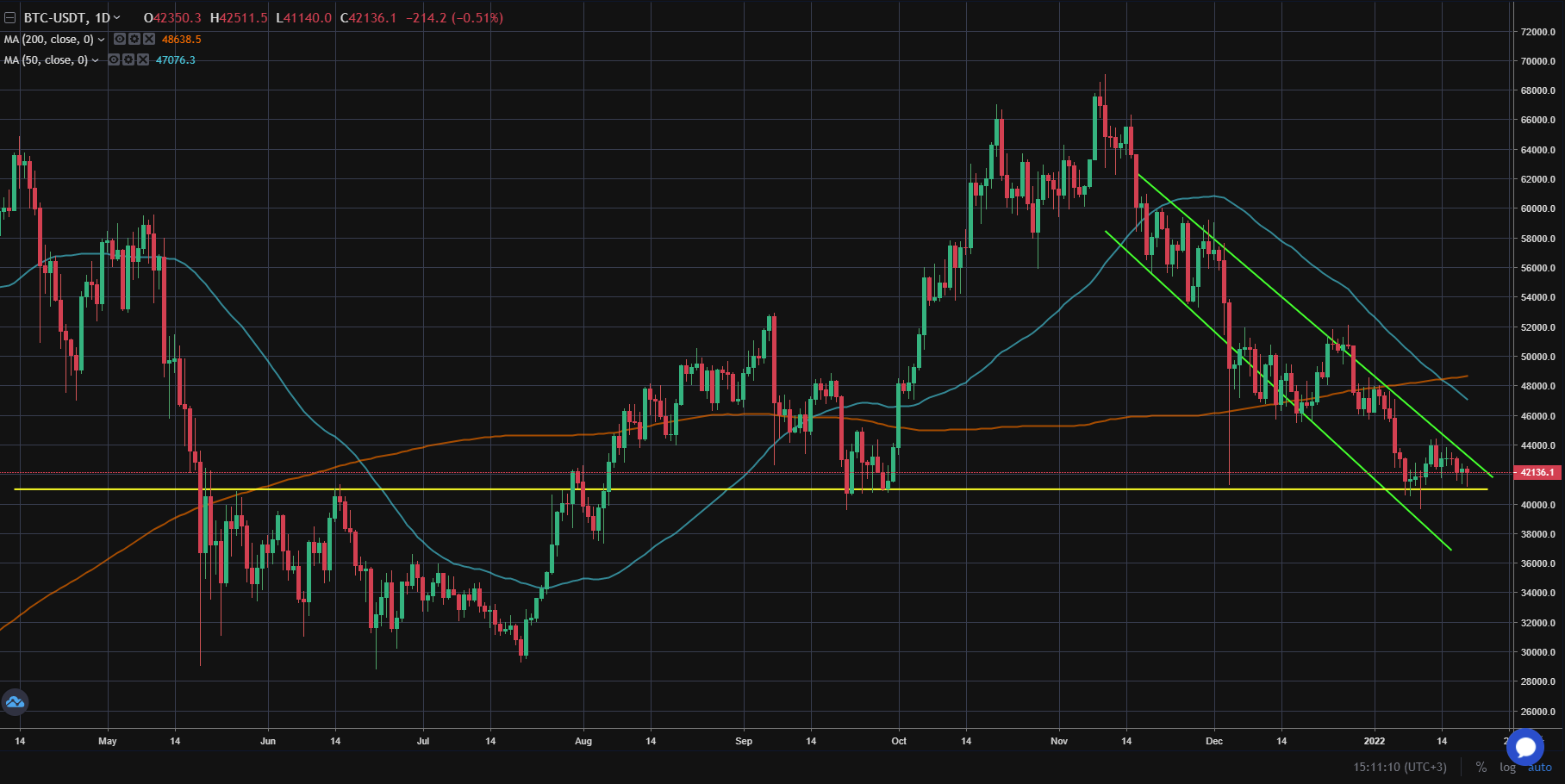 The $41,000 level, which was analyzed in detail in the previous review, is still critical for us, as the BTC price value is still near it. There was a significant event: the 200-day moving average (MA) went beyond the 50MA, drawing a “death cross”.

At the moment, the death cross does not pose a big threat to the value of the largest crypto asset, since on the chart the situation can very quickly change in the opposite direction, and the death cross itself can turn out to be just a manipulation. The price of BTC continues its movement in the downward channel, however, it is worth paying attention to the $41,000 support zone, which “clamps” the Bitcoin price mark between itself and the downward channel.

You should also take into account the situation on the stock market, which is currently in uncertainty and is preparing for a likely correction, which, accordingly, also puts pressure on the value of BTC. On February 1, the Chinese New Year begins, which is a controversial event for the cryptocurrency market and can significantly affect the value of the largest cryptocurrency.

The use of Stop-Loss is mandatory, it is important to carefully calculate the risks when making any trading decisions in the current market situation. 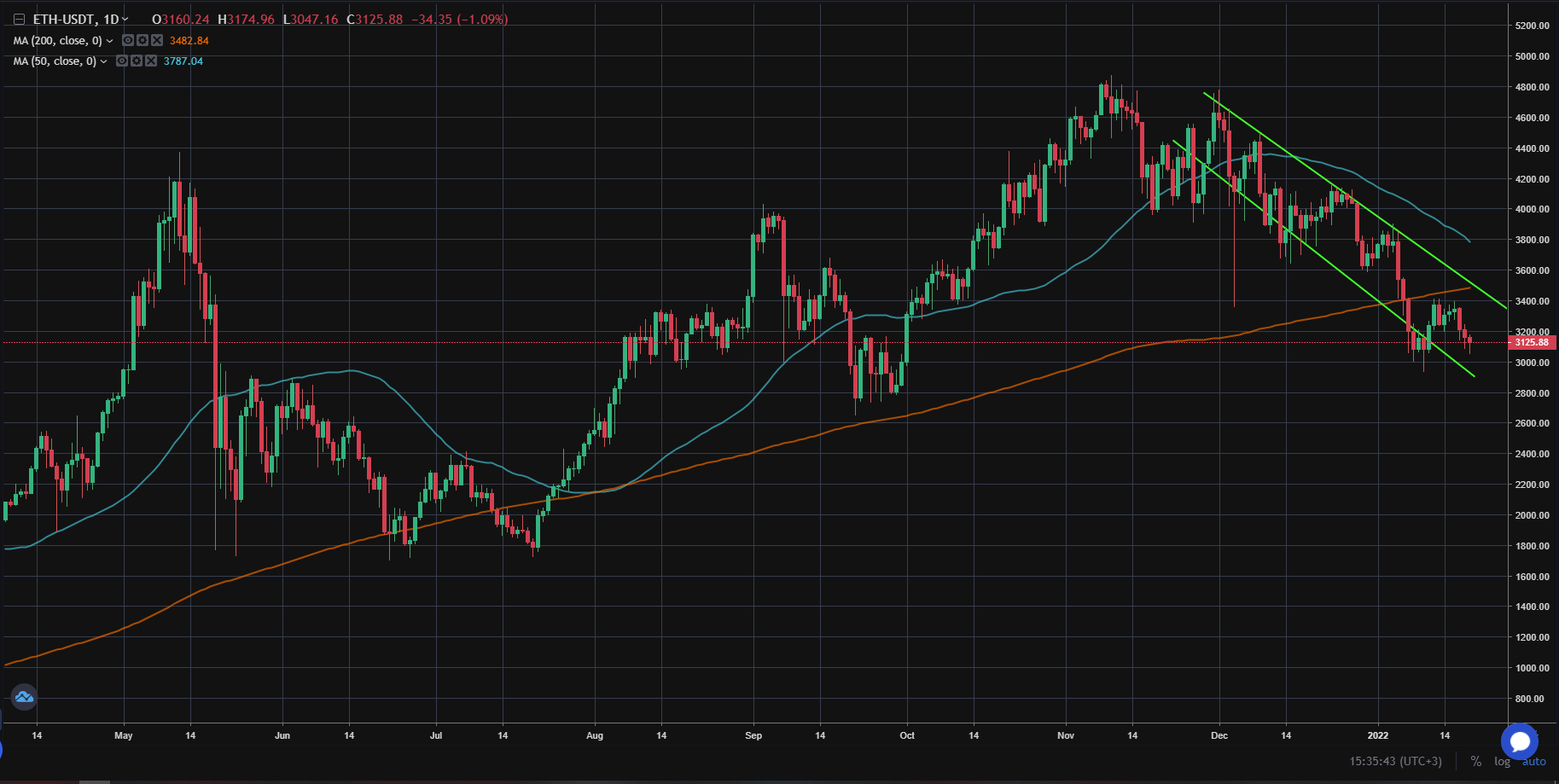 The descending channel described in the previous review was broken last week. The price of ETH tested the lower line, but never returned. ETH is still holding the $3,000 support level, but this should change soon. There is an active “rounding” of the 50 MA, most likely we should also expect a death cross.

The outcome of events largely depends on the development of the situation on the BTC market: if the cost of the largest crypto asset does not go higher, then a favorable price situation cannot be expected on the Ethereum market. In this case, the price of ETH may fall to the level of $2,000.

At the moment, the scenario on the Ethereum chart looks extremely negative, but still, positive changes in the BTC situation can easily change this.