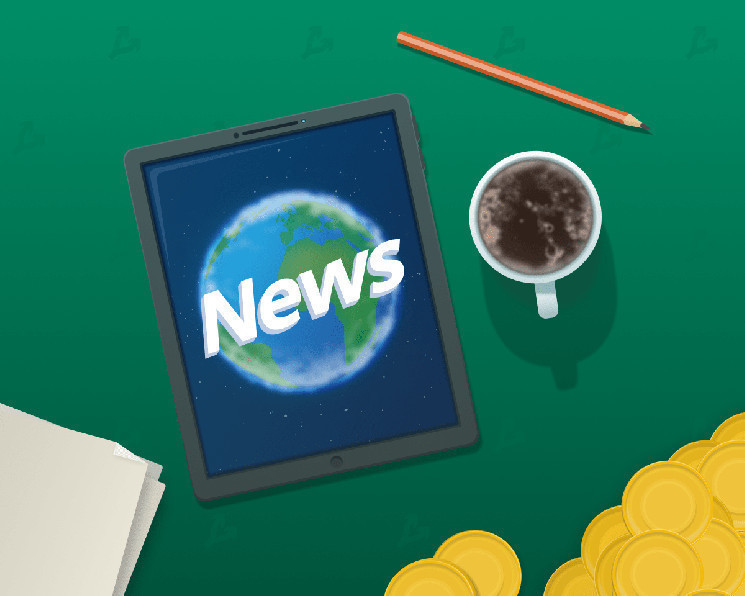 Tesla began to sell merch for DOGE, and in the Russian Federation they proposed to identify the owners of cryptocurrencies

Tesla began accepting Dogecoin in an online store, two lone miners included blocks in the bitcoin blockchain, the head of the Russian Investigative Committee Alexander Bastrykin proposed to identify the owners of cryptocurrencies and other events of the outgoing week.

On January 10, the price of bitcoin dropped to $39,650 (on the Binance exchange). The subsequent buyout allowed the quote to rise above $44,000. However, digital gold failed to gain a foothold above this mark.

At the time of writing, the first cryptocurrency is trading near $43,400.

Against the backdrop of a partial recovery in bitcoin quotes, all digital assets from the top 10 by market capitalization closed the week in the green zone. The best performers were Terra (+28%), Cardano (+19%), Binance Coin (+16%) and Polkadot (+16%). 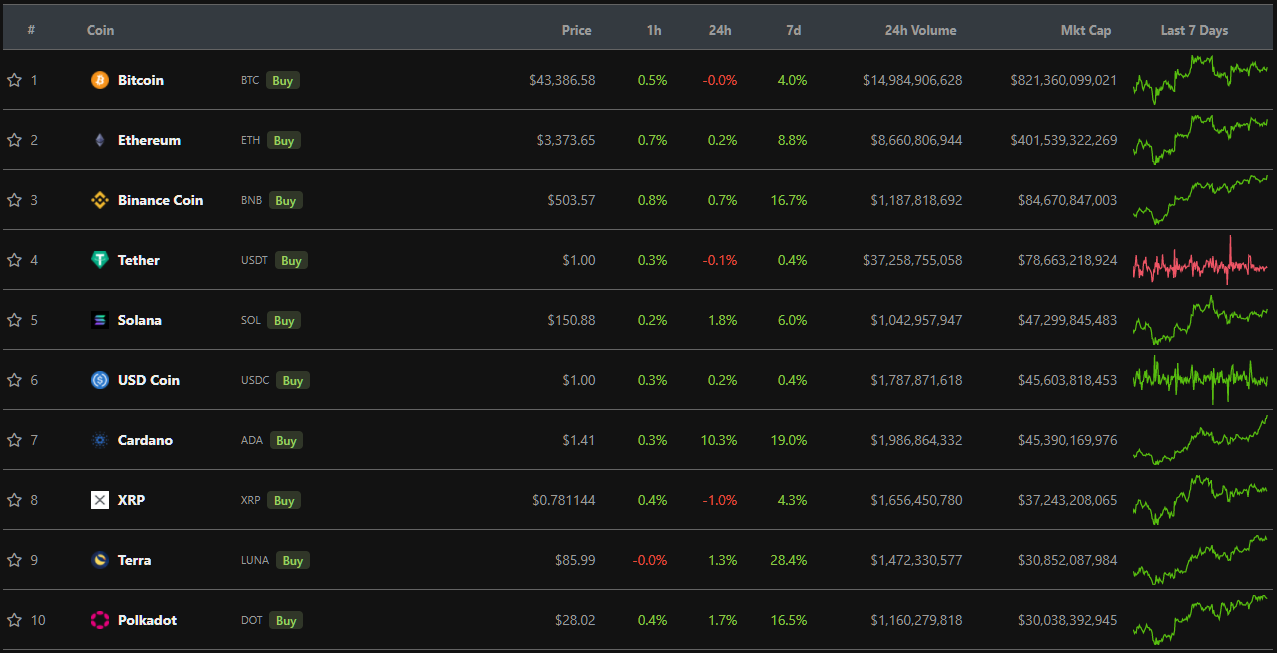 According to the CoinCodex service, the token of the cross-chain protocol Multichain (formerly Anyswap) ANY has risen in price most of all among digital assets over the week. Its price has increased by 71%. The project no longer supports the asset, however, holders can convert it into a new native MULTI token.

The algorithmic token of the Olympus v2 project fell in price more than others. The price of OHM decreased by 31%. 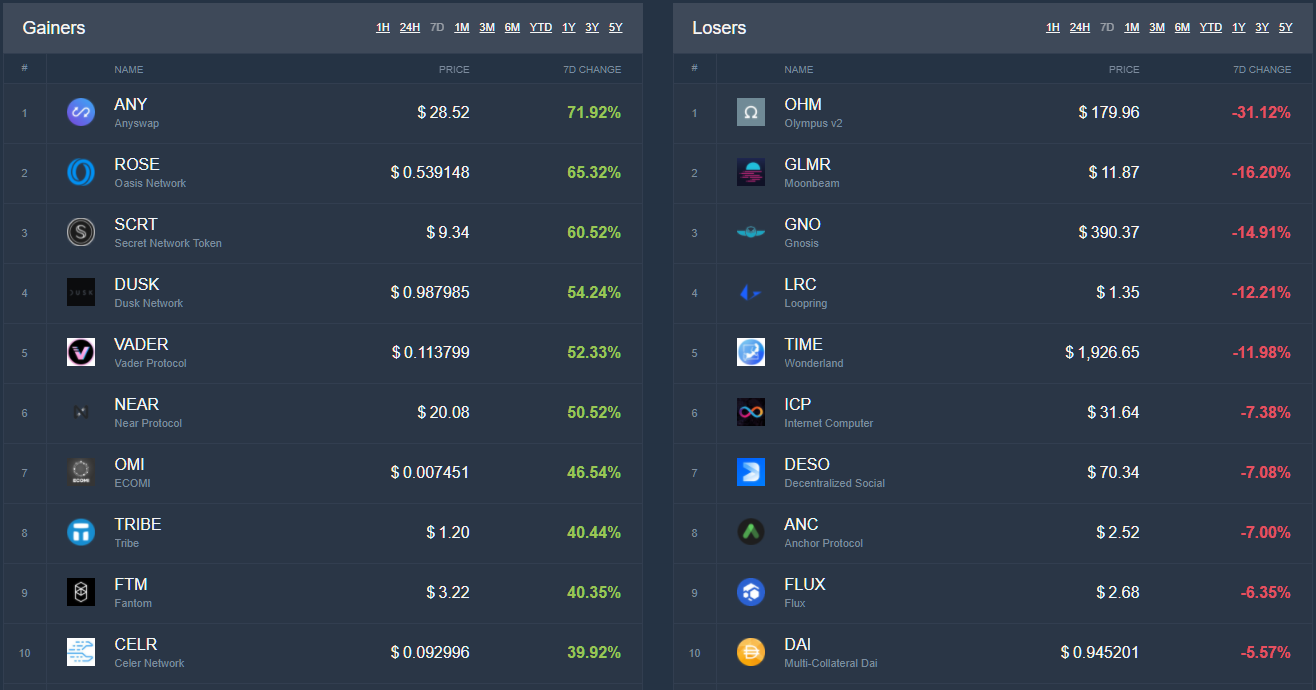 The total capitalization of the cryptocurrency market amounted to $2.2 trillion. The Bitcoin Dominance Index dropped to 37.1%.

On January 12, 2009, the creator of bitcoin, under the pseudonym Satoshi Nakamoto, made the first cryptocurrency transaction by sending 10 BTC to cryptographer Hal Finney.

Tesla has begun selling certain goods for Dogecoin (DOGE). Some products on the website of the manufacturer of electric cars can only be purchased for cryptocurrency. At this stage, buyers are not given the opportunity to choose a form of payment.

The support subsite states that the company only accepts DOGE payments. Tesla does not support other digital assets and emphasizes that senders of incorrect transfers will lose their money.

Against this background, Dogecoin in the moment rose by 30%, to $0.214. A day before the announcement of Tesla, an unknown user purchased 8 million DOGE for $1.4 million.

Single Miners Get 6.25 BTC for Finding a Block

On January 11, an unknown bitcoin miner with a hardware capacity of 126 TH/s included block 718,124 in the blockchain. This was reported by the administrator of the CKPool pool to which the devices are connected. The probability of finding a block at the current hash rate was 0.000073%.

On January 13, history repeated itself with another CKPool user. He included block 718,379 on the Bitcoin blockchain with a hardware capacity of 116 TH/s. It is noteworthy that the miner used the service for only two days.

The owners of cryptocurrencies should not remain anonymous due to the risks of using such assets for criminal purposes. This was stated by the head of the Investigative Committee of Russia Alexander Bastrykin.

At the same time, the National Financial Association came up with a proposal to reconsider the issue of a total ban on Russian investments in digital assets.

Tether has blacklisted three addresses on the Ethereum blockchain at the request of law enforcement. The total value of assets in the USDT stablecoin on them exceeded $160 million – it is impossible to transfer funds from these wallets.

An unknown person withdrew 66,143 BTC from the hot wallet of the BTC-e cryptocurrency exchange to the address of the Coinbase trading platform. This was announced by the CEO of Indefibank Sergey Mendeleev.

The transaction was carried out on July 25, 2017, the day of the arrest of the alleged BTC-e co-owner Alexander Vinnik. According to Mendeleev’s investigation, the amount was distributed in small parts to thousands of wallets from the Coinbase wallet using a pre-written script.

On January 13, the NEAR Protocol native token (NEAR) hit an all-time high as the project team announced a new $150 million funding round led by venture capital fund Three Arrow Capital. The project was also supported by Andreessen Horowitz, Alameda Research, Dragonfly Capital and other investors.

Block (formerly Square) by Jack Dorsey has opened positions for the team to develop a “next generation” ASIC miner and hardware wallet “for the next 100 million bitcoin users.”

This week, Dorsey also announced the creation of a fund to protect bitcoin developers in lawsuits. The organization is ready to provide lawyers, develop defense strategies and cover legal costs so that they can continue their work.

Group of insured FDIC The USDF Consortium in the United States announced plans to create a network of banks to promote the USDF stablecoin issued by its members.

The consortium has set a goal to solve the problem of non-bank reserves transparency, like Tether. Provenance blockchain will be used in the implementation of the “banking alternative”.

In 2022, almost a quarter of small merchants in nine countries plan to accept digital currencies as a form of payment. This comes from a Visa survey of 2,250 small business owners in Brazil, Canada, Germany, Hong Kong, Ireland, Russia, Singapore, the United Arab Emirates and the United States.

At the same time, Visa is working with ConsenSys on infrastructure to help central banks and financial institutions create user-friendly services on top of networks. CBDC.

Vitalik Buterin asked subscribers about an alternative to Ethereum

Vitalik Buterin conducted a poll on his Twitter in which he asked about the most popular currency in 2035, with the exception of Ethereum.

“You wake up in 2035 and 80% of the world’s transactions and savings are in one currency, and that’s not ETH. What do you think it will be the currency?”, — he wrote.

Sponsor of the column “Bitcoin industry in numbers” – the global blockchain ecosystem Binance.

We’ve taken a look at the most notable airdrops of 2021. We found out which tokens brought the most profit to their holders, and figured out whether it is worth sticking with the HODL strategy after receiving the distribution.

On January 10, live on ForkLog LIVE, together with Ton Weiss, summed up the results of 2021 and talked about what lies ahead for us.