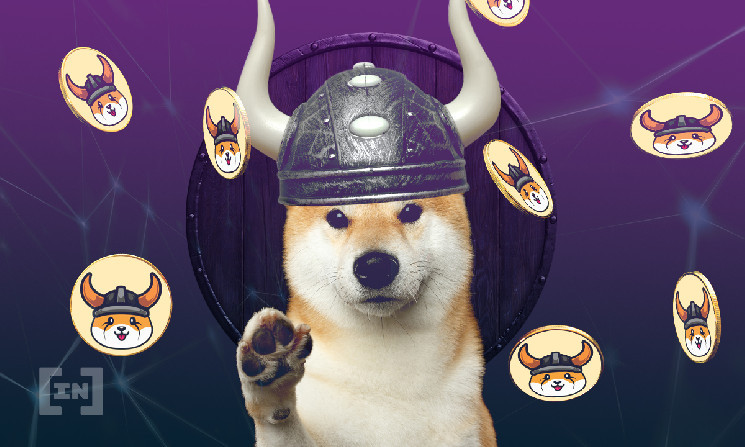 In an exclusive interview with BeInCrypto, one of the key players of the Floki Inu team talked about how this year the Viking dog can leave the Shiba Inu project far behind.

FallDamage, one of the key members of the Floki Inu team, gave an exclusive interview to the BeInCrypto editors. He told how the team is working to strengthen the fundamental base of the project, and expressed confidence that this can help the “Viking dog” catch up and overtake its competitor Shiba Inu this year.

We also discussed the Floki Inu metaverse called “Valhalla” and tried to find out when users will get the first access to it and the first rewards for playing. FallDamage also shared the difficulties that the project faced in the early stages of its formation, spoke about the departure of the first developer from the team and the operation to rescue the helpless puppy Floki Inu.

2021 has been a successful year for Floki Inu (FLOKI). The number of owners of the coin exceeded 390 thousand. The project also launched a number of international advertising campaigns, including a campaign on YouTube and on US television, including channels such as CNN, CNBC and Fox News.

In addition, the project became a sponsor of eight football clubs. Among them was FC Spartak-Moscow, which was reported by the editors of BeInCrypto in December. At the time, the club’s management noted that Floki is a “people’s cryptocurrency”, the purpose of which is to “change the crypto industry by providing reliable utility.”

Commenting on plans for the new year 2022, FallDamage confirmed that this year the project intends to “catch up and overtake” Shiba Inu.

“That is our goal. We really believe that this year we will be able to offer more value than Shiba, we hope that our customer base will exceed the number of Shiba owners, in which case we will have every reason to beat Shiba in terms of market capitalization.”

Moving away from theoretical considerations, FallDamage also said that the priority for the Floki Inu team is to work on improving and developing their own project, and not trying to compete with others. Therefore, unlike Shiba Inu, Floki Inu does not position itself as a “Dogecoin killer”.

In this regard, he highlighted an important difference between the two projects.

“I think of one interesting comparison between Floki and Shiba. We launched the token and created the contract with the idea of ​​development in mind and making sure that we have enough money for such development. Meanwhile Shiba Inu, as far as I can tell – and I’m also part of that community – doesn’t have a marketing or development budget. For the most part, whales are investing in this project, and his team depends on such investors. Our project has money, because we planned everything from the very beginning,” said FallDamage.

At the end of the year, the owners of Floki Inu were 390 thousand people (Source)

When will we be allowed into Valhalla?

A potentially interesting element of the Floki Inu ecosystem is the promised GameFi metaverse “Valhalla”. In it, players will receive rewards in the form of FLOKI coins. As FallDamage explained, recently the team’s main front of work has been concentrated precisely in the Valhalla segment.

“We are working on the game metaverse and it will take some time to finalize and refine it, so we are now drawing up cost estimates. Marketing has slowed down a bit in the last three weeks as we want to make sure we have enough funds to cover all costs before spending more on marketing.”

These comments are yet another reminder of the challenges small teams face when trying to deliver value to their project and having to juggle multiple tasks as a full-time professional job. So, FallDamage devotes 20-30 hours a week to the project. It used to be 40 hours, but he had to revise his schedule due to family circumstances.

He refused to give a specific date for the opening of the new play-to-earn metaverse for users, but the BeInCrypto editors have reason to believe that this could happen as early as the 1st quarter of 2022.

In addition, FallDamage recalled the earliest stages of the project’s inception and development. He said that, unfortunately, the original developer Floki Inu was not completely honest with the community.

“He just cut the ground from under our feet. He took a lot more money than he was supposed to, he did not use it at all to promote the project on the market, we were minting coins at an unprecedented rate. By the time the V2 version was launched, the volume of coins issued was already seven times higher than the same indicator at the time of the V1 launch. So instead of a deflationary trend, we actually had crazy inflation. We appealed to him to solve this inflationary problem. We also wanted to make sure that the money he charges for marketing is actually spent on marketing. As a result, he just vanished.”

Despite (or perhaps because of) these obstacles, Floki Inu eventually rallied around him a team of dedicated people committed to the success and prosperity of the project. Let’s see how things will progress in 2022.