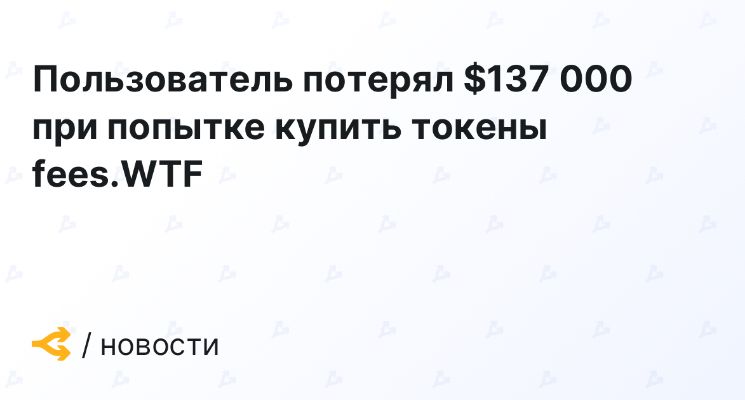 The fees.WTF service airdropped WTF tokens among Ethereum users who spent at least 0.05 ETH (~$160) to pay for gas on the network. Participants rushed to get rid of the received coins – within a few hours, the price of the asset fell by 66%, according to CoinGecko.

Contract is verified and open for review, and our updated website is live. You can claim your airdrop at 12am GMT. You can now get your free referral link to copy and send out. Each claim that uses your ref nets you $ETH 👀https://t.co/DczpQYPv7Lhttps://t.co/P3wPQlRsIT

fees.WTF allows you to track the fees that users spend on gas on the Ethereum network. WTF tokens can be placed in a staking pool, which at the time of writing promises an annual return of 1400%. Asset holders also have the right to issue a unique NFT for each wallet.

According to on-chain data, when creating the initial pool of WTF-WETH on the Uniswap platform, developers contributed over 2111 WTFs and only 0.000001 WETH.

The liquidity imbalance has allowed users to sell relatively small amounts of WTF for large amounts of WETH. Buyers of WTF, on the contrary, purchased tokens at an inflated cost.

There are also reverse cases. An unknown person, presumably the operator of a trading bot, was able to withdraw 58 WETH from the pool by paying only a network fee of 0.47 ETH. To do this, he waited until other bots “pumped out” almost all the liquidity in WTF, and then sent a transaction to sell the asset, offering an increased commission so that it would be included in the block earlier.

11/ As a result, this person was able to successfully drain 58 ETH in liquidity from the $WETH <> $WTF pool in under a minute:https://t.co/tmI7wBD4QU

Recall that in December 2021, the Gas DAO project carried out an airdrop of GAS tokens among users who spent more than $1,559 on commissions in the Ethereum network.