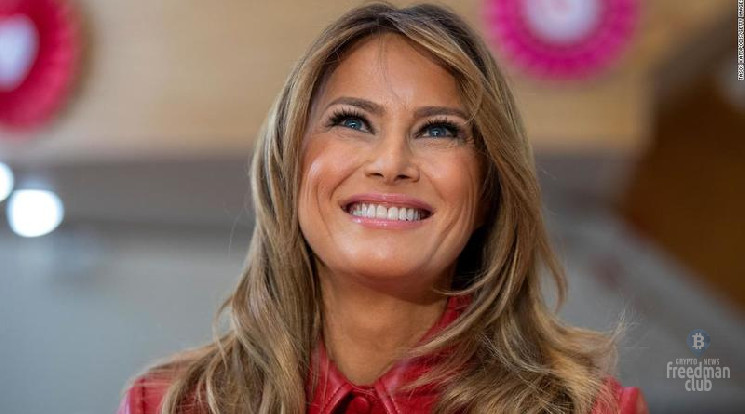 Why did Melania Trump wish Bitcoin a happy birthday?

By a strange coincidence, Melania Trump wished Bitcoin a happy birthday on her Twitter account. But where does the former first lady get her interest in cryptocurrencies?

This surprised and caused gossip among the crypto community, even though Melania already has her own line of NFTs, which she is actively promoting. At the same time, her husband, former US President Donald Trump, calls the cryptocurrency industry “ready to explode at any second.”

And let’s face it, not many people know about the 13th anniversary of the orange coin. Therefore, the logical question remains whether the author of the message is the celebrity herself or the team publishing posts on social networks on her behalf. The Twitter post reads:

“It is widely known that the market capitalization of Bitcoin is in excess of US $ 1 trillion. Today is the 13th anniversary of the Bitcoin Genesis Block. Happy anniversary, Satoshi Nakamoto. “

Was Melania Trump just trying to get us to write about her? Is it just about promoting her NFT? Or is it related to Donald Trump?

If Donald Trump accidentally mentioned Bitcoin once, that would be one thing. But America’s former president has consistently smashed a leading asset with his criticism. Seven months ago, Donald Trump’s words even led to a drop in the price of Bitcoin. Trump was asked about his opinion on cryptocurrency and the US stock market during an interview, to which he replied:

“Bitcoin is just a scam. I don’t like it because it’s a different currency competing with the dollar. ” Trump reiterated, “I believe the dollar should be the currency of this world, and I don’t think we should be paying attention to Bitcoin.”

And that’s not all. Bear in mind that the former president has barely appeared in the media since losing the election. Well, just a few weeks ago in another interview, Donald pounced on cryptocurrencies in general.

Former President Trump claims he knows cryptocurrency “so well” and considers it “very dangerous,” especially because he needs a “currency called the dollar.”

“I don’t want to have all this other money. Moreover, it could be an explosion like we have never seen before. It’s good that I love the dollar, ”he explains.

What do we know about NFT Melania Trump?

“I am proud to announce my new NFT endeavor that embodies my passion for the arts and will support my continued commitment to disadvantaged children through my Be Best initiative.”

The report states that part of the proceeds will go “to help children.

The painting consisted of watercolors of her eyes and a recording of her voice saying: “My vision is this: I look forward to inspiration, strength and courage.” The sale ended on December 31st and 2,807 units were sold, according to researcher Solana. If these numbers are correct, the business has earned approximately $ 480,000 at SOL’s current prices.

Of course, Donald and Melania Trump are different people and may have different opinions. Politically, however, they are one. Is this whole situation a strategy? The golden beetle Peter Schiff and his son are known to work together, one of them smashes Bitcoin and the other protects it using a somewhat transparent trick. Can we witness something like this?

However, even if they imagined themselves to be Tesla CEO Elon Musk, who often influences the rate of cryptocurrencies, expressing his opinion, the Trump couple will not be able to effectively influence the movement of Bitcoin or any other assets as well.