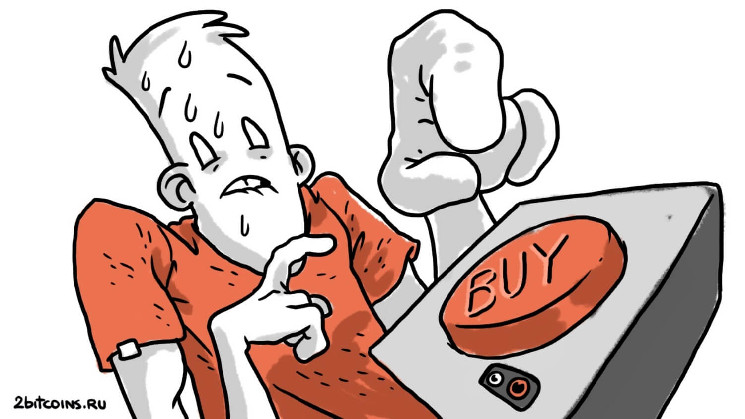 Worst and best cryptocurrency market investments in 2021 – what are they?

There are only a few days left until January 1, which means it’s time for us to sum up the outgoing year for the cryptocurrency market. It has become a real boon for crypto enthusiasts: over the past 12 months, a huge number of digital assets have shown unprecedented growth in price and number of users. However, there were also failures – not all cryptocurrencies pleased traders and investors with Xs. Today we will look at the most profitable and most unsuccessful investments among the known coins. Here they are.

The list of the ten largest cryptocurrencies by capitalization has undergone significant changes since January 1, 2021. Such projects as Litecoin, Chainlink and Bitcoin Cash “dropped out” from it. Instead, Solana, USD Coin and Avalanche entered the top 10. At the same time, Dogecoin, Solana and Terra showed the best results in terms of profitability.

As noted by Cointelegraph journalists, the rapid growth of this altcoin was caused by its active promotion by billionaire Elon Musk. 12 months ago, DOGE was trading at $ 0.004 and was out of the focus of attention of most traders.

However, in early February, when Elon mentioned the coin on Twitter several times, its price jumped several times in just a couple of days. The second wave of growth took place in April and May, when, after a rise in price of almost 1100 percent, DOGE reached an all-time high of around $ 0.731. This jump gave the coin the fourth place in the ranking of cryptocurrencies in terms of capitalization. 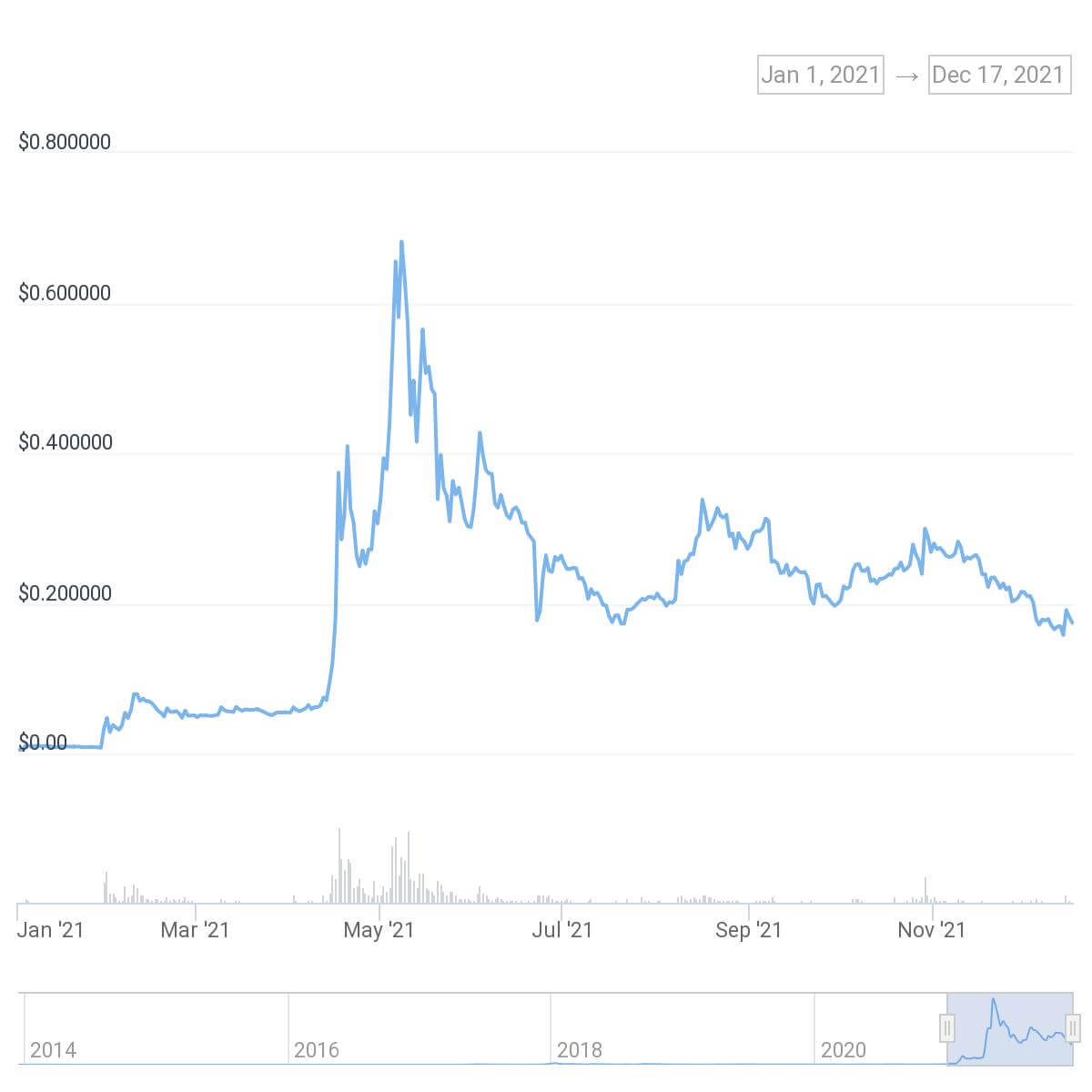 However, a few months later, even thanks to the huge hype, DOGE could not stay in the top 10 of the rating. But the success of the “meme-coins” project gave way to many startups inspired by him on the “dog” theme. The most famous among them is Shiba Inu.

The native token of the Solana blockchain in early 2021 was valued at only $ 1.52. At the time of this writing, its price is close to the $ 190 level. This is an increase of almost 10 thousand percent in just 1 year. 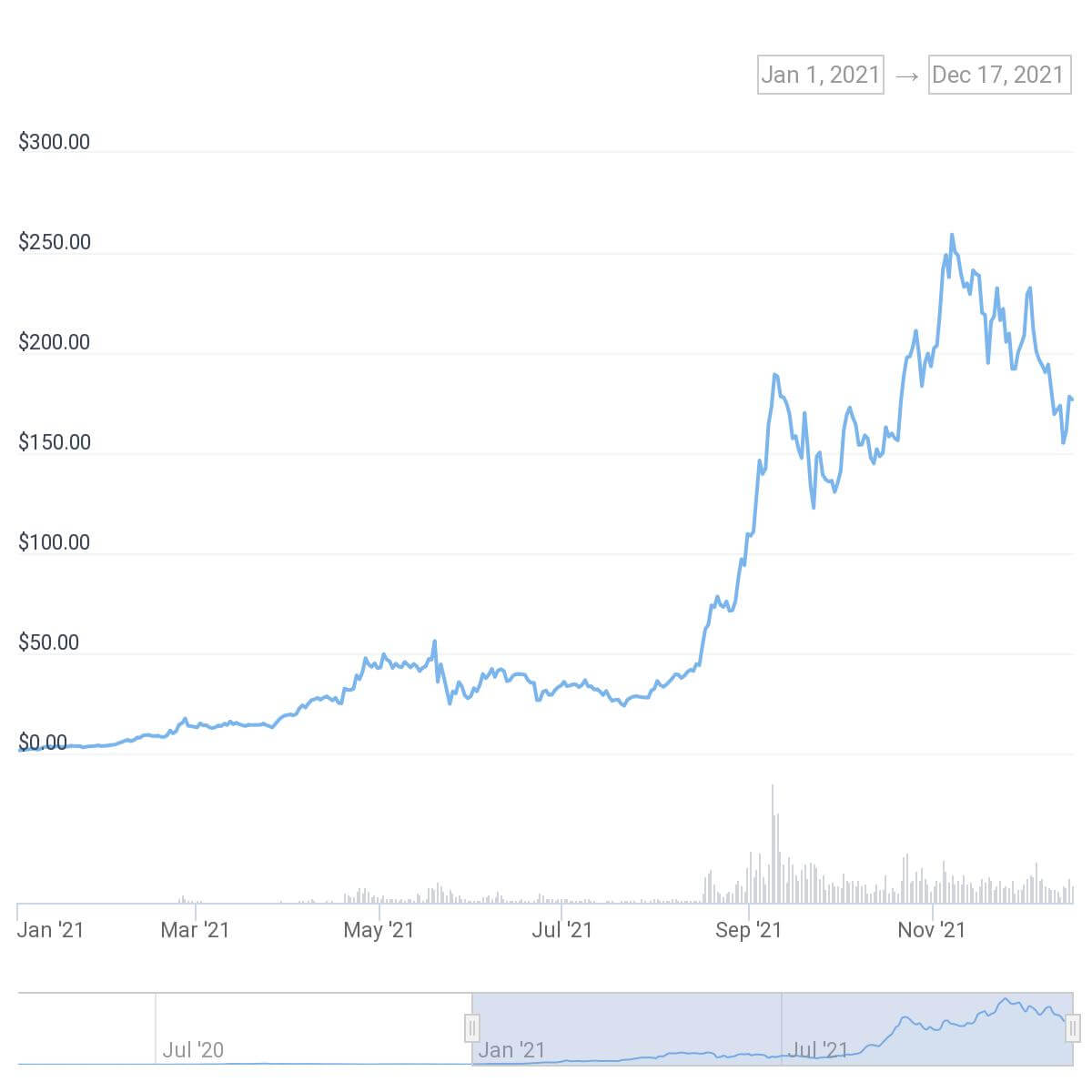 What is most interesting is that Sam Bankman-Fried, an active supporter of the project and the CEO of the popular FTX crypto exchange, at the beginning of the year, responded rather sharply to the comments of Solana critics. Then he said that he was ready to buy out a huge amount of tokens at a price of $ 3 and “shut everyone’s mouth.” As you can see, his calculation regarding the growth in popularity and cost of the project turned out to be correct.

A similar level of success has been demonstrated by the Terra decentralized payment network token. Altcoin managed to enter the top 10 cryptocurrency rating by capitalization after rapid growth from 0.65 to 90.93 dollars in just one year… The record of the course is $ 103. 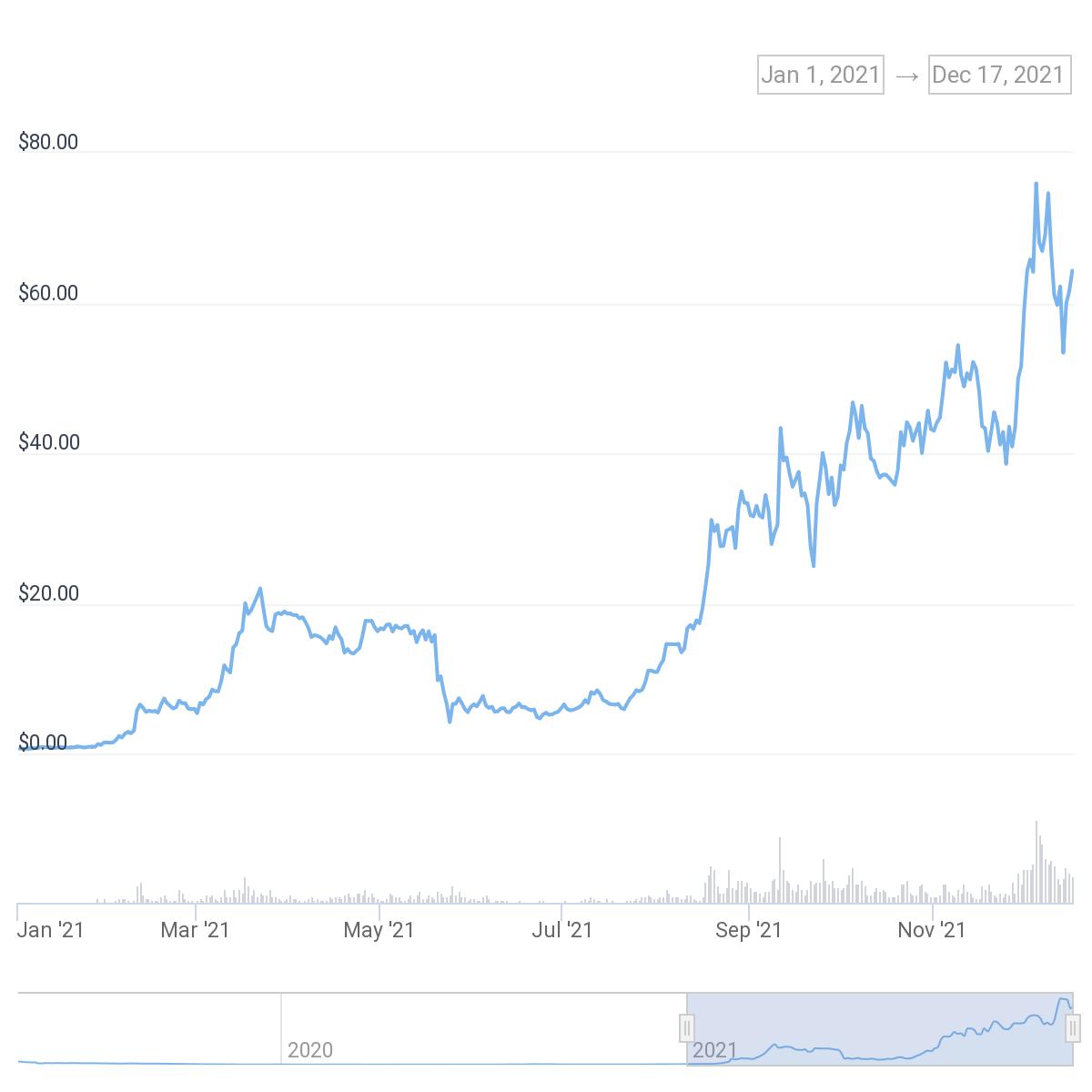 The first native on the Terra chart is visible in March and May, but the highest growth rate has been observed since August. Over the past few months, Terra has set new all-time highs several times and has no intention of stopping.

Internet Computer is one of the champions in terms of development time. The project has been created for over five years, while the distribution of its ICP tokens began only this year. He promised an Internet revolution that would revolutionize the trillion-dollar IT industry by allowing developers to create their code directly on the new standard’s “public internet” without resorting to third-party hosting companies. 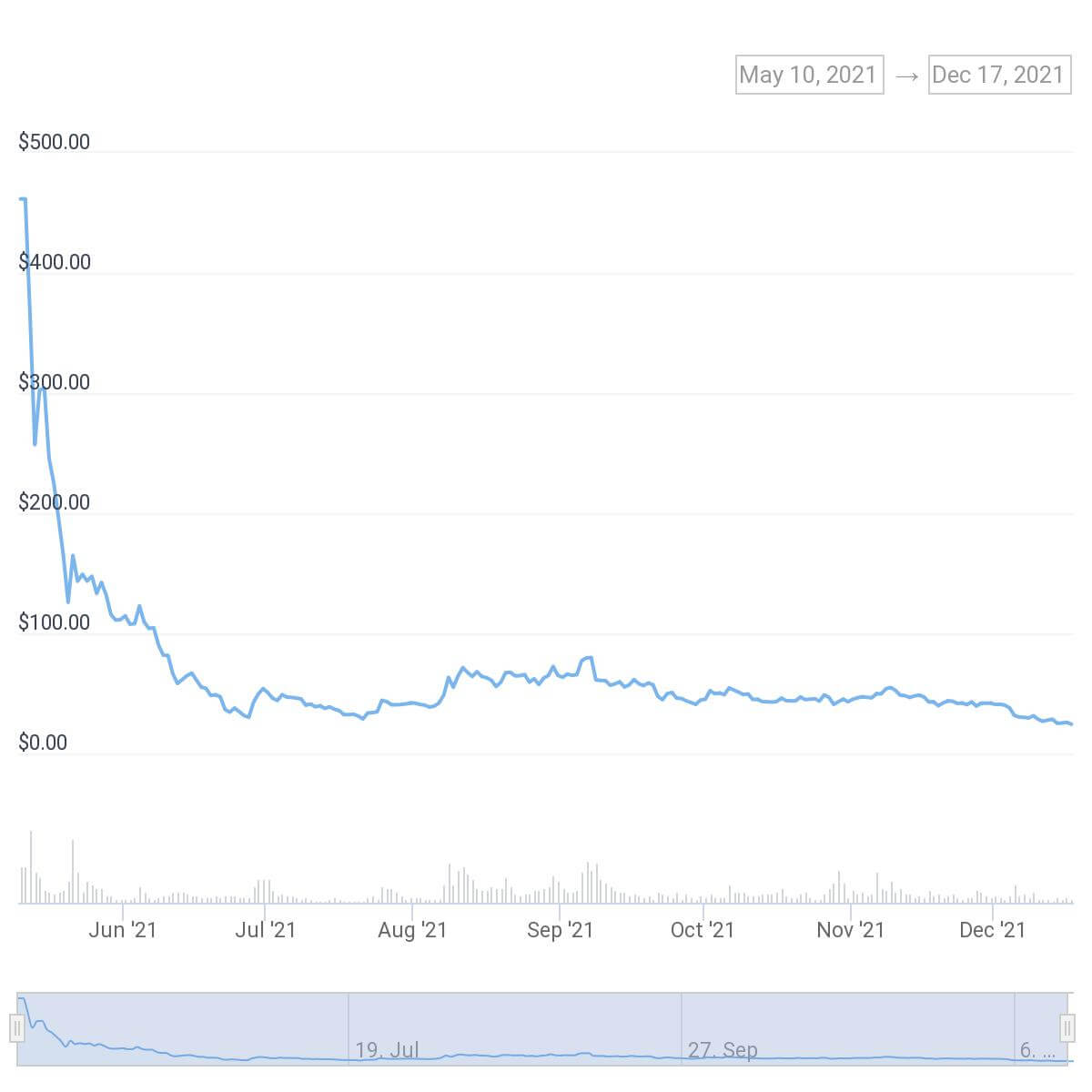 However, judging by the price of the token, the idea did not attract much attention from new investors. Because large funds, having received the privilege of investing in the project a couple of years ago, began to actively merge tokens on exchanges immediately after their listing. The result is sad – in a few months the price of ICP fell by almost 96 percent – from $ 700 to $ 24.

The EOS token is familiar to many who have followed the crypto market during the previous bullish cycle. Then the altcoin gained wide popularity as one of the “potential killers” of Ethereum. However, this year the market dynamics of EOS was rather boring – the asset moved in a horizontal channel most of the time, except for the rise and fall in May this year. 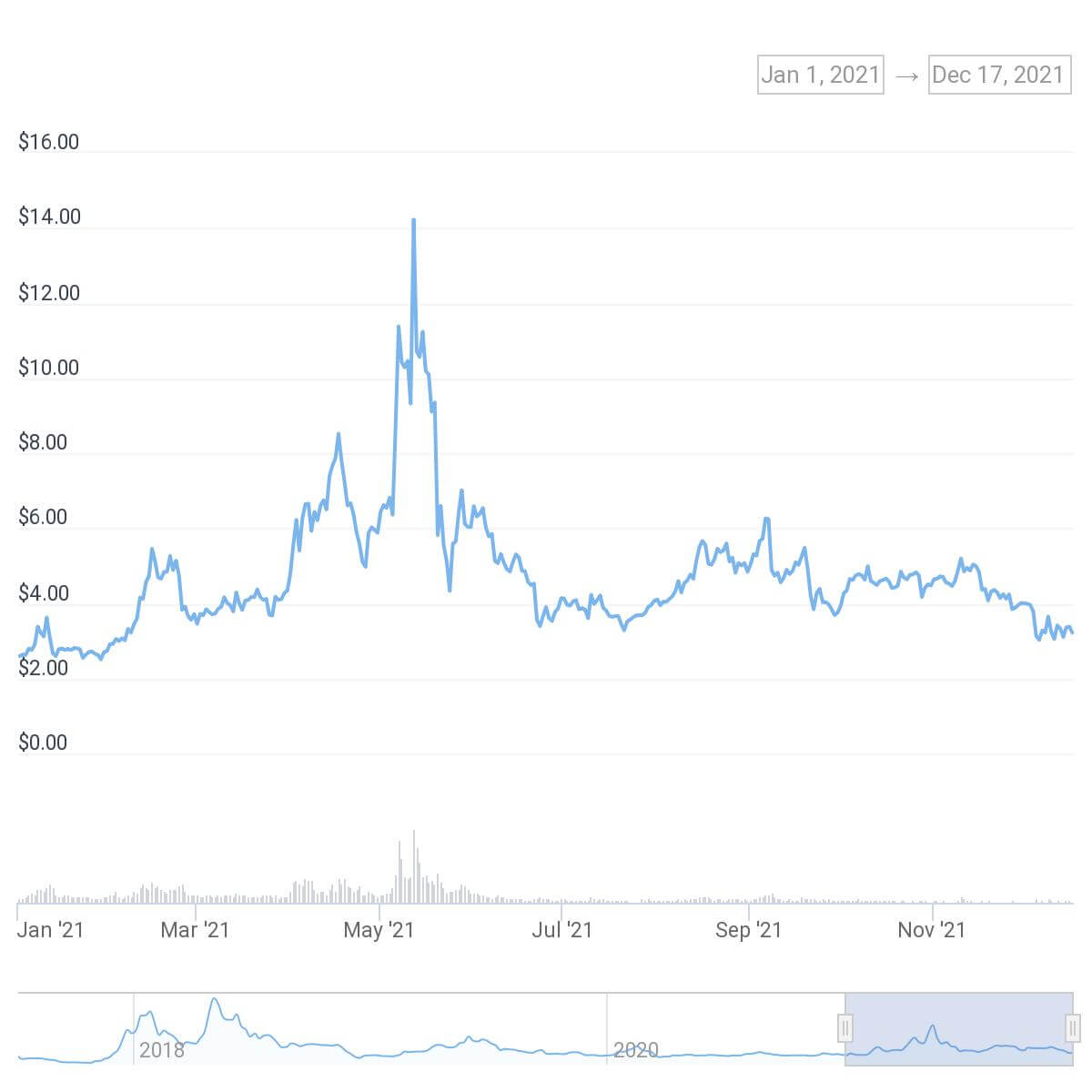 Another candidate for the title of outsider is the altcoin Monero, which is focused on the privacy of transactions. Cryptocurrency is of great interest to law enforcement agencies and regulators as it remains an excellent vehicle for fraudsters to transfer funds anonymously. 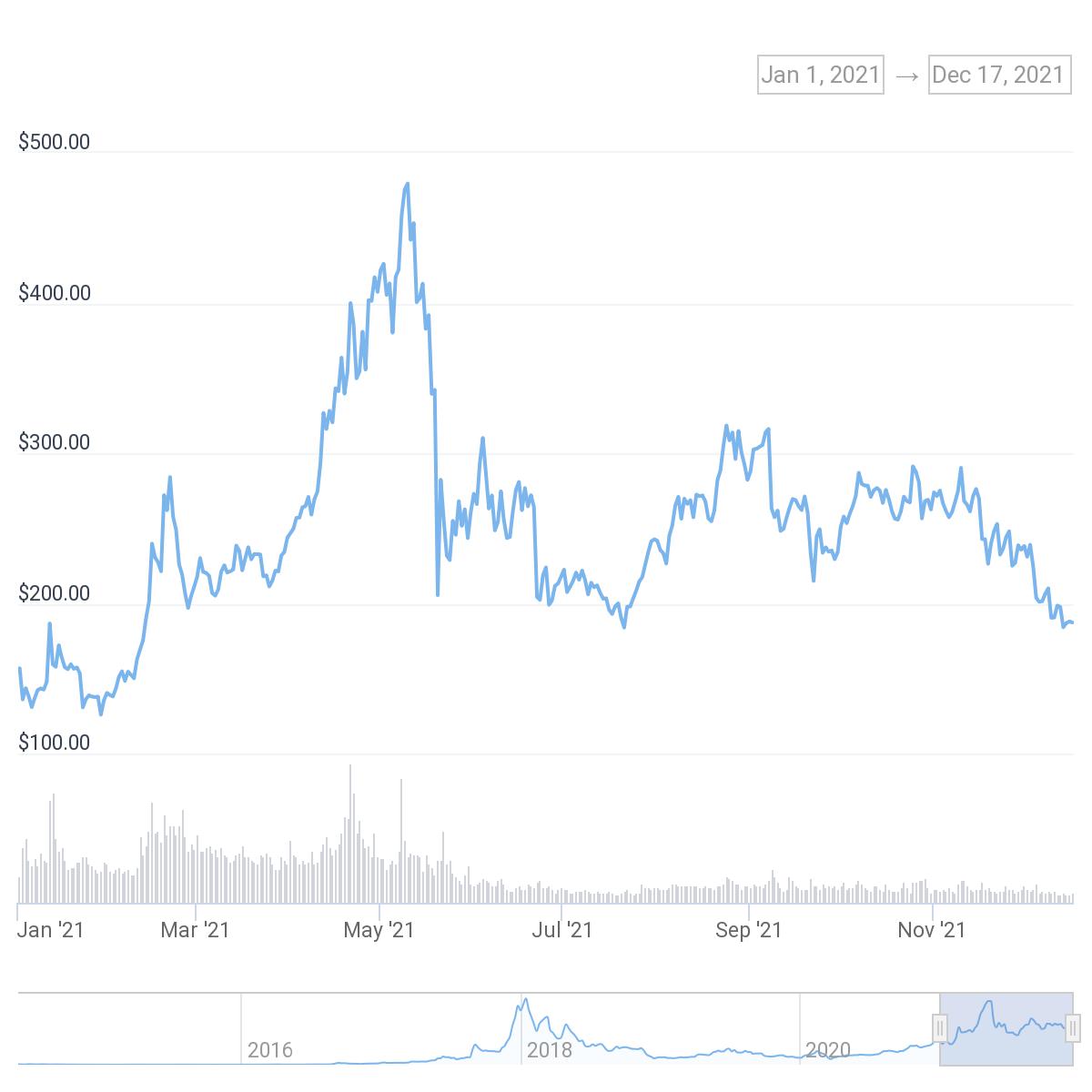 However, for ordinary investors, XMR was not interesting this year. Most of the time, the coin’s price did not rise above $ 300, while it is now trading 66 percent below its all-time high of January 2018.

In general, the table of changes in the cost of popular cryptocurrencies by months and for the year as a whole looks like this. As you can see, some projects have increased in price by more than 10 thousand percent. 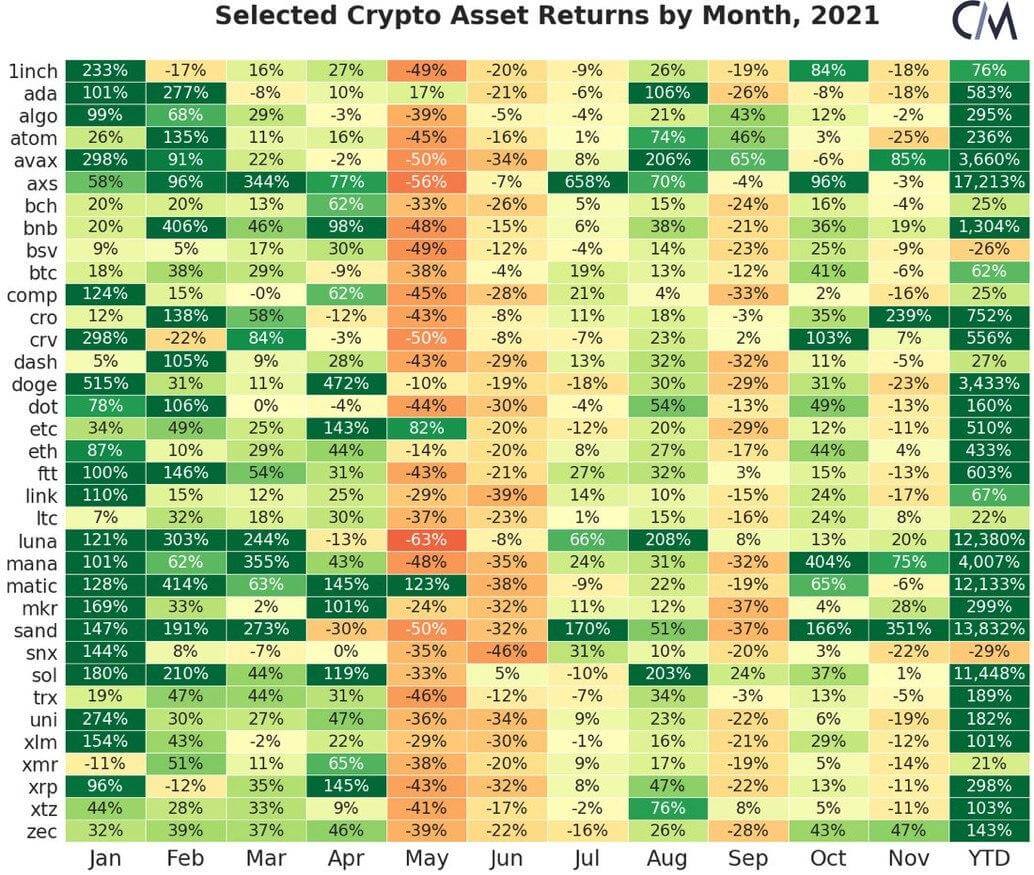