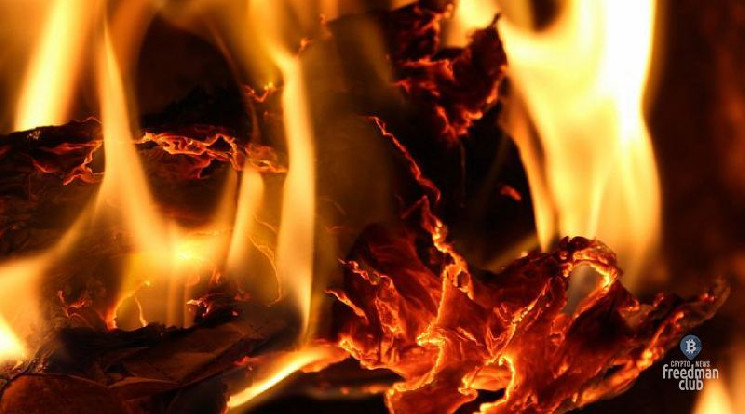 In this article, you will learn about the burning of popular tokens such as SHIB, LUNA and ETH, as well as the reasons for burning them.

Bigger Entertainment’s team spread information that during the partywhich aired live on their YouTube channel on Sunday (December 26), the amount in 239 600 144 SHIB was sent to address zero and permanently withdrawn from circulation.

The company began burning Shiba Inu crypto tokens in October this year, according to Bigger Entertainment recording studio owner Stephen Cooper. Bigger Entertainment sells NFTs, merchandise and event tickets for cryptocurrencies, allowing the SHIB army to do its part to destroy it. In addition, users can listen to music tracks on the project’s website, which also helps burn the second largest cryptocurrency of memes.

On December 26, the last incendiary party of this year took place. According to a tweet and a YouTube video stream, 239,600,144 SHIB tokens were burned or sent to a dead address from which these coins cannot be withdrawn or spent. This is equivalent to 9183 USD to Fiat.

Over 800 Million SHIB Burned Since Mid-Autumn

Initially, Cooper hoped to burn one billion coins and in several tweets urged the SHIB community to support the initiative with $ 5 each. However, his enthusiasm was not shared, and only a fifth of a billion was burned.

Over the past 24 hours and ten hours, various organizations have burned a total of 370.4 million Shiba Inu coins, according to data provided by Etherscan.

Earlier, Stephen Cooper tweeted that over the next 60 days, the SHIB burning rate will double as the project has just begun to explore new ways to burn these meme tokens.

$ 2.7 Billion LUNA Was Burned Due to UST Demand

Nearly $ 2.7 billion worth of LUNA tokens were burned in December due to a surge in demand for UST, according to Terra Analytics. LUNA has set a record high in $ 104.27 December, after which it decreased slightly. According to CoinGecko, LUNA is trading at a price of $ 98.68, which is 26% more than in the past seven days.

According to Terra Analytics, the decline in supply at the beginning of December was 94,243,648 units. The difference from the current supply reduction is almost 27 million.

Currently, 102.71 million LUNA tokens have been burned at the end of September since the Columbus-5 update took effect. In addition to interoperability, the Columbus-5 update introduced a new mechanism for linking stablecoins to their fiat value: every time a UST is created, an equivalent amount of LUNA is burned.

This gives a direct correlation between the two assets, so that “as demand for UST rises, the price of LUNA rises as well.”

LUNA, Terra’s own blockchain asset, has risen in value by 18134% per year, according to CoinGecko. Terra is ranked ninth among cryptocurrencies in terms of market capitalization.

Terraform Labs Co-Founder and CEO, Do Kwon, shared the news that Terra has reached $ 10 billion in market cap, making it the first decentralized stablecoin to reach this level. Having reached this milestone, UST has dramatically changed the market cap of MakerDao’s DAI of $ 9.3 billion.

TerraUSD (UST) is a one-of-a-kind algorithmic stablecoin in which coins are burned or minted to keep the value of the coin at the desired price. The algorithm will automatically burn a batch of coins to increase the deficit, thus raising the price of UST.

It is believed that the ETH rate kept from falling, thanks to the mechanism of burning part of the miners’ commissions, launched on August 5 with the introduction of EIP-1559 as part of the London hard fork. From the beginning of its operation to the time of Christmas on December 24th, the network was destroyed 1 million ETH or $ 4.2 billion

Considering decentralized finance in separate areas, it is worth highlighting NFT. It was transactions with non-fungible tokens that provided the largest volume of ETH flaring according to EIP-1559, exceeding all transactions in the Ethereum network by this indicator.