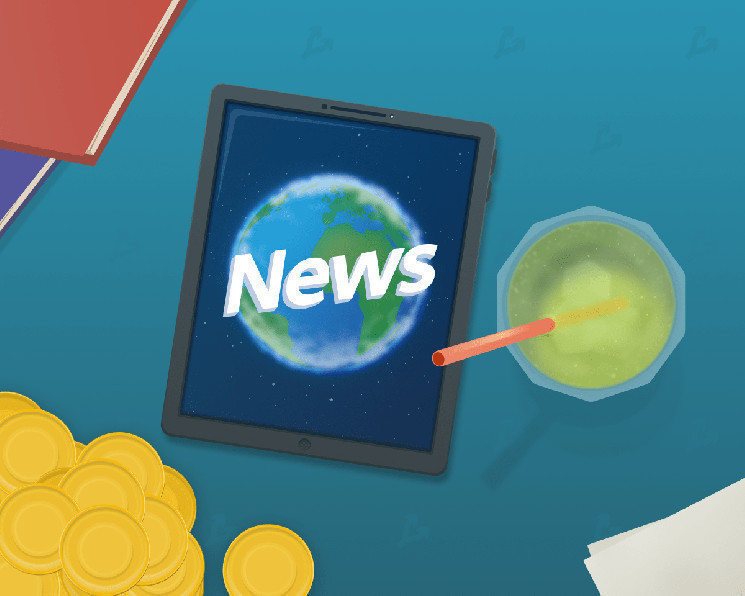 in the Russian Federation again started talking about the ban of cryptocurrencies, and Pavel Durov supported the Toncoin project

In the Russian Federation, they again started talking about the prohibition of cryptocurrencies, Pavel Durov publicly supported the Toncoin project, the BitMEX exchange announced an airdrop of its own token and other events of the outgoing week.

Bitcoin price surpassed $ 51,000, but failed to gain a foothold above this mark

On Thursday, December 23, the quotes of the first cryptocurrency rose above the $ 50,000 level, and the next day they surpassed $ 51,000. Digital gold failed to gain a foothold above this mark. At the time of writing, the asset is trading near $ 50,150.

Bitcoin pulled the rest of the market with it. According to CoinGecko, all digital assets from the top 10 by capitalization closed the week in the green. The Terra project token (LUNA) has risen in price by almost 34% over the past seven days, updating its all-time high above $ 100. 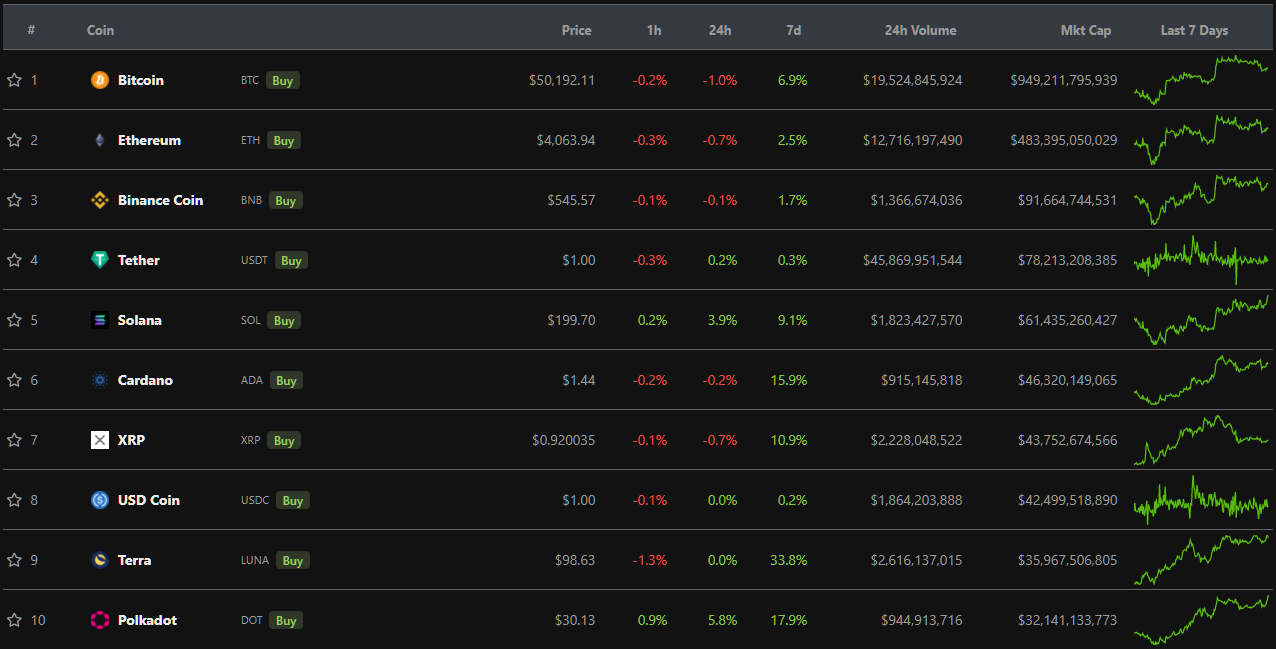 The highs also updated the tokens of the NEAR Protocol (NEAR) and Polygon (MATIC) projects.

According to the CoinCodex service, the token of the financial P2P platform Veritaseum has risen in price the most of the digital assets with moderate capitalization over the week. The price of VERI increased by 153%, and the capitalization reached $ 364.28 million.

The cryptocurrency of the metaverse YooShi (YOOSHI) has fallen stronger than others. Its price decreased by 10%, capitalization amounted to $ 374.36 million. 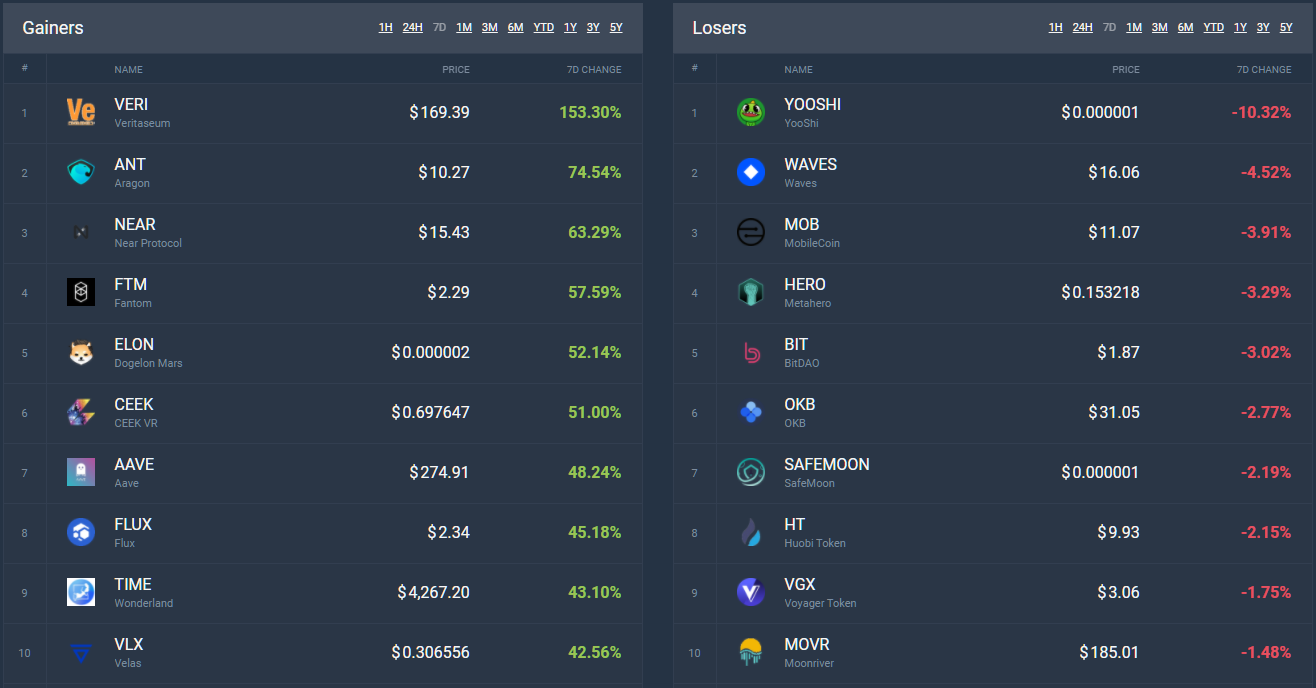 The total capitalization of the cryptocurrency market was $ 2.5 trillion. Bitcoin dominance index dropped to 38%.

The Russian central bank intends to legislatively regulate the rules for the circulation of cryptocurrencies. This was stated by the Deputy Chairman of the Central Bank of the Russian Federation Vladimir Chistyukhin.

According to him, the central bank believes that residents of the Russian Federation and business representatives can own and store cryptocurrency, but not through domestic infrastructure or intermediaries.

The official, that in the near future the Central Bank will present a more detailed position in relation to cryptoassets in a separate document:

Earlier, the Deputy Chairman of the State Duma and the head of the group, Alexei Gordeev, spoke about the first meeting of the working group on cryptocurrencies, without specifying the vector of the discussion. According to Sergei Mendeleev, CEO of Indefibank, the final decision was made at the meeting to ban these assets.

Forbes, citing a source close to the Bank of Russia, said that the regulator and financial market participants are discussing several options for limiting investments in the cryptocurrency market, including blocking card transfers for certain MCC-code.

Mendeleev also posted a screenshot of a letter in which Tinkoff Bank requested documents from the client on “crypto-exchange operations” carried out using accounts.

In a conversation with ForkLog, Managing Partner of GMT Legal Andrey Tugarin noted that credit institutions in the Russian Federation have the right to restrict clients’ access to their services if they perform operations with cryptocurrencies and refuse to confirm the source of the funds.

Pavel Durov for the first time publicly commented on the work of the Toncoin project. According to him, the technology created by Telegram is alive and developing. He stressed that Toncoin does not depend on the messenger team, and wished the developers success.

BitMEX will issue its own token

On February 1, 2022, the BitMEX cryptocurrency derivatives exchange will issue the BMEX token and airdrop. Platform users can already earn an asset for registering with KYC procedures or using a referral system. Going forward, BMEX will provide discounts on commissions.

The ability to trade and withdraw BMEX will appear approximately at the beginning of the second quarter of 2022, when the BitMEX spot platform is launched.

The Dogecoin Foundation has unveiled an updated project roadmap. Among other things, there is indicated a transition from the Proof-of-Work algorithm to Proof-of-Stake, which implies cryptocurrency staking and refusal of mining. Work in this direction is being carried out in collaboration with Ethereum co-founder Vitalik Buterin.

Binance cryptocurrency exchange has abandoned the concept of quarterly burning of Binance Coin (BNB) tokens in favor of the Auto-Burn mechanism for their automatic withdrawal from circulation.

The mechanism is intended to ensure greater transparency in this process. The algorithm does not take into account the revenues generated by the Binance trading platform, but solely based on the price of BNB and the number of blocks mined during the quarter.

This week, media reports surfaced a $ 750,000 fine imposed by the Turkish Financial Crimes Investigation Board on Binance.

Airdrops of the week

Terra-related domain name service Terra Name Service unveiled the TNS token and distributed 17% of its supply, or 8.33 million coins, to users on December 24.

The snapshot for the first distribution was taken on December 17 at 12:32 pm Moscow time.

The service is analogous to the Ethereum Name Service, which previously ran a token giveaway to early adopters – which is why TNS was inspired by the ENS experience.

The developers emphasized that they want to avoid getting tokens in “weak hands”, and therefore excluded bounty hunters from the distribution.

Also on December 24, the OpenDAO project carried out an airdrop of SOS tokens among OpenSea users. A snapshot of the network was taken on December 23.

Despite the hype surrounding the distribution, very little is known about the project itself. The OpenSea developers emphasized that they have nothing to do with SOS, and recommended “to study the contract before demanding tokens.”

American cryptocurrency exchange Kraken has acquired staking platform Staked. The deal was dubbed “one of the largest acquisitions in the industry,” but financial details were not disclosed.

Kraken CEO Jess Powell confirmed that the company is working on an NFT marketplace. According to him, a system may appear on the site in which customers can use non-fungible tokens as collateral for loans.

Larry Cermak gives a forecast for the bitcoin industry for 2022

In 2022, investor interest in existing crypto projects will continue, and exchange operators and data providers will benefit the most. This forecast was given by the vice president of research at The Block Larry Cermak.

In his opinion, the focus in the coming year will be on second-layer protocols, enabling faster and cheaper transactions on top of blockchains. The key to this will be the existence of decentralized applications, immediately created for L2 solutions.

Blockchain technology remains one of the hottest trends among financial, government and commercial organizations around the world. ForkLog magazine offers an overview of the most interesting recent initiatives.