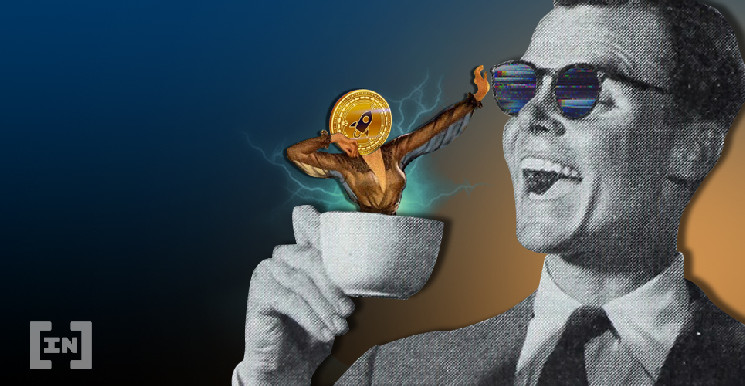 LUNA has updated its all-time high. Who else is lucky

The editors of BeInCrypto have compiled a top list of altcoins, which showed the maximum gain in the week from December 17 to 24.

In addition to LUNA, the list of these altcoins includes:

NEAR made a bullish breakout of the downward resistance line on December 15 and renewed its all-time high at $ 17.50.

However, on the same day, the price formed a long upper wick on the chart and again rolled back below the resistance line.

After that, the coin launched a new phase of growth and yet broke through both this line and the resistance area of ​​$ 12.20 on December 23. At time of writing, the price is approaching an all-time high.

Since the beginning of October, the ELON token has shown a rapid strengthening, which ultimately brought it to its all-time high on October 30 at $ 0.0000026.

After that, the price began to decline along the line of downward resistance and sank on December 6 to a minimum of $ 0.00000093.

Then the market turned around and started to grow. On December 21, the price broke through the downward resistance line. 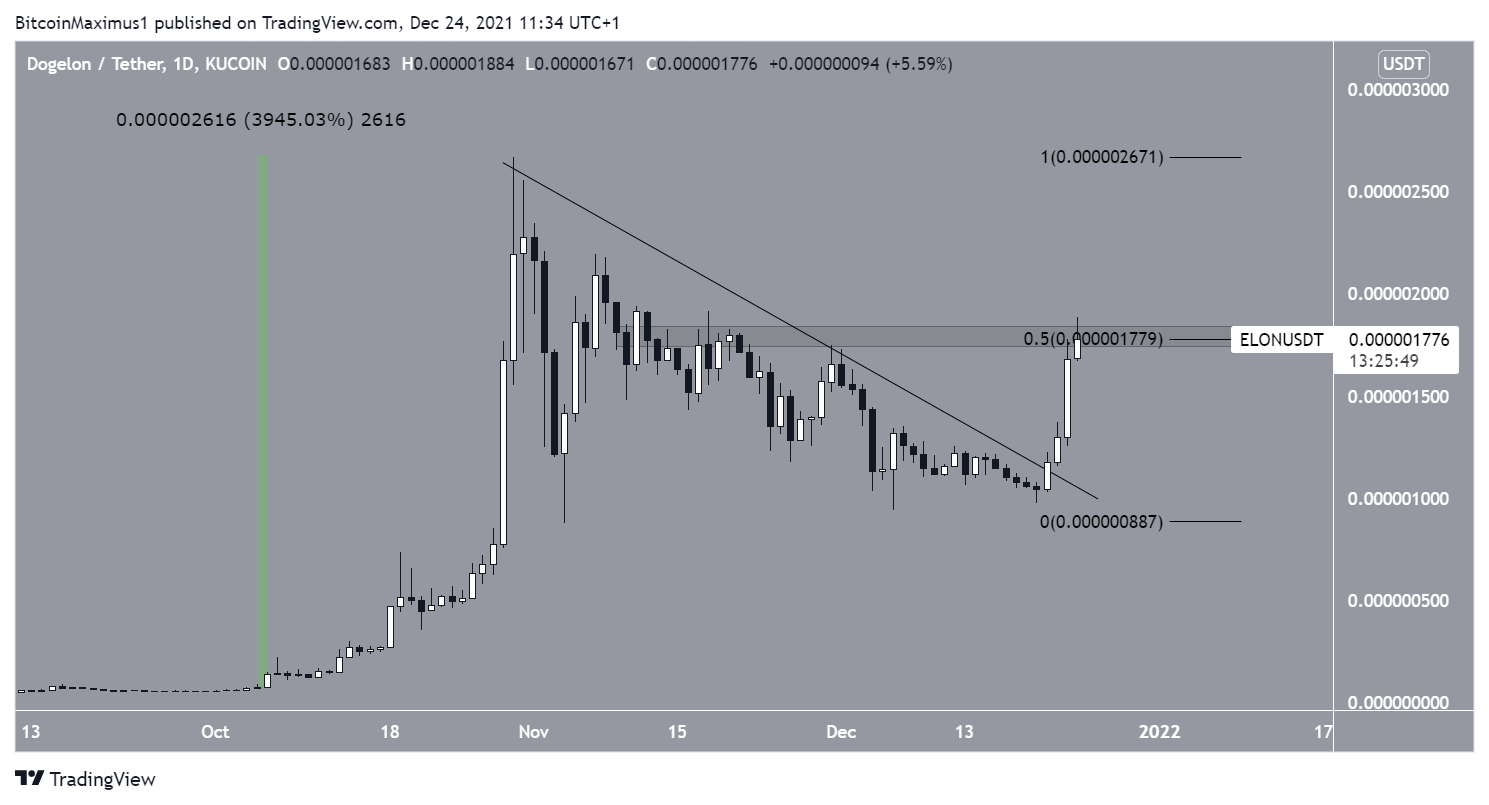 LUNA, the native coin of the DeFi project Terra, has grown at an accelerating pace since December 14. As a result, on December 22, it renewed its all-time high at $ 98.20. The high was formed just above the 1.61 Fib level of the external correction of the last bearish move (in black).

At first, the LUNA rate bounced from here, but then rallied and resumed its growth, moving the historical maximum on December 24 to a new level of $ 101.2.

Further, the nearest resistance is in the region of $ 116- $ 120. It is formed by the Fibo level 2.61 of the external correction (black) and the coefficient of 1.61 of the previous growth phase (white)

The AAVE rate dropped slightly on December 14 below the horizontal support area of ​​$ 176, which has not happened since the end of June.

At first it seemed that a bearish breakout was imminent, but eventually the coin formed a double bottom and began to rise.

At the time of writing, the price has reached the downtrend resistance line that has been present on the chart since May.

If it manages to make a clean break of this barrier, the next resistance will come into play at $ 422. 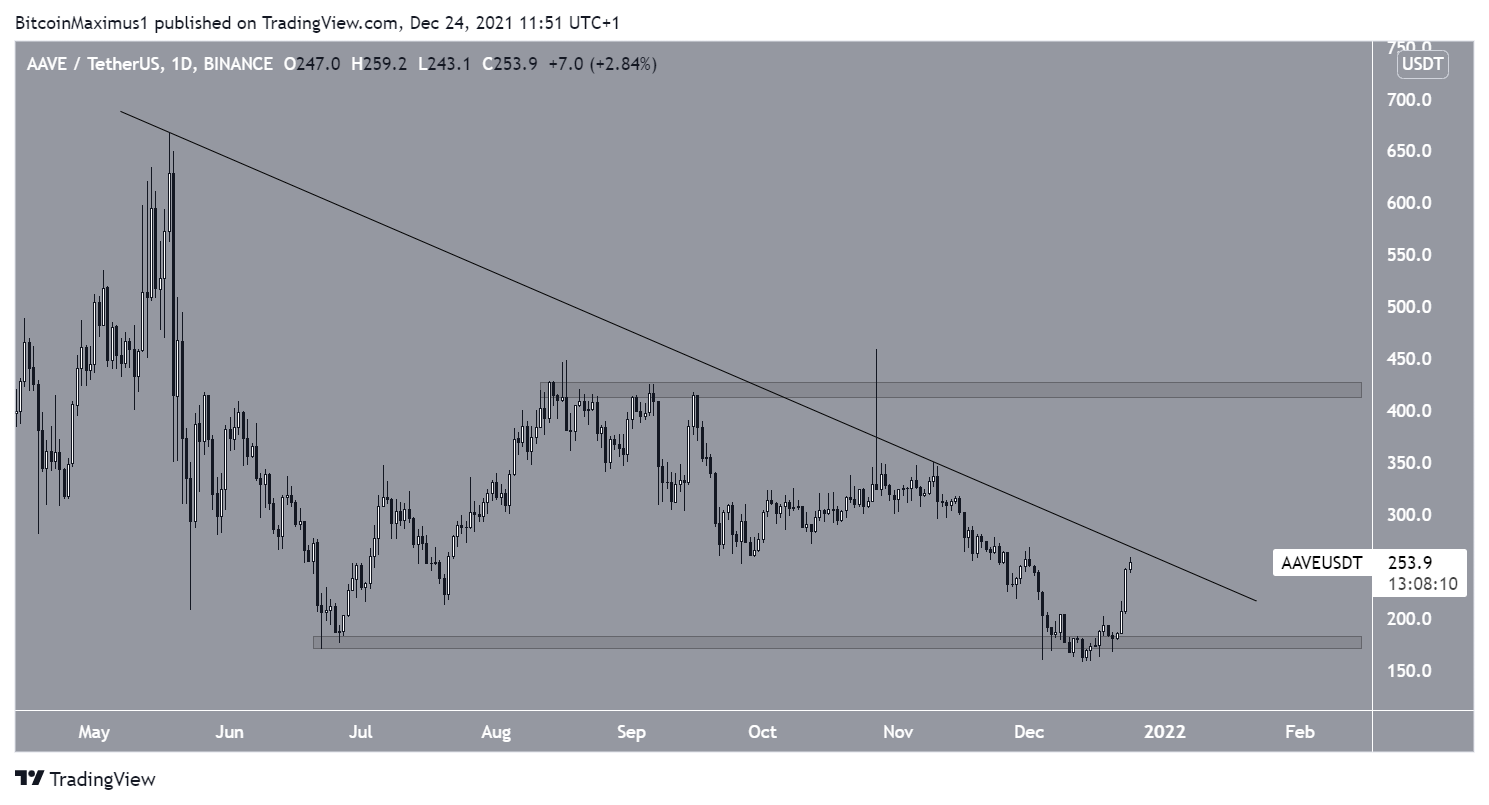 The native token of the Fantom FTM platform marked a minimum of $ 1.14 on December 4 and bounced off it. During the formation of this minimum, the market tested the strength of the horizontal area of ​​$ 1.15 as a support.

Since then, the FTM has continued to move north and is currently up 75%.

As with the AAVE, the price is moving along the line of downtrend resistance (currently at $ 2.10).

A breakout of this mark could send the coin towards the horizontal area of ​​$ 2.60.