Investors believe bitcoin’s growth phase is far from over

Many members of the crypto community believe that BTC is ahead of a renewal of the maximum value.

The most capitalized cryptocurrency – bitcoin – began the last day of the working five-day period with a sideways movement. As of 08:00 (Moscow time), the digital asset is trading at $ 47,923. The minimum value of bitcoin in 24 hours, according to the CoinMarketCap resource, is fixed at $ 47,529, the maximum is at $ 49,425. 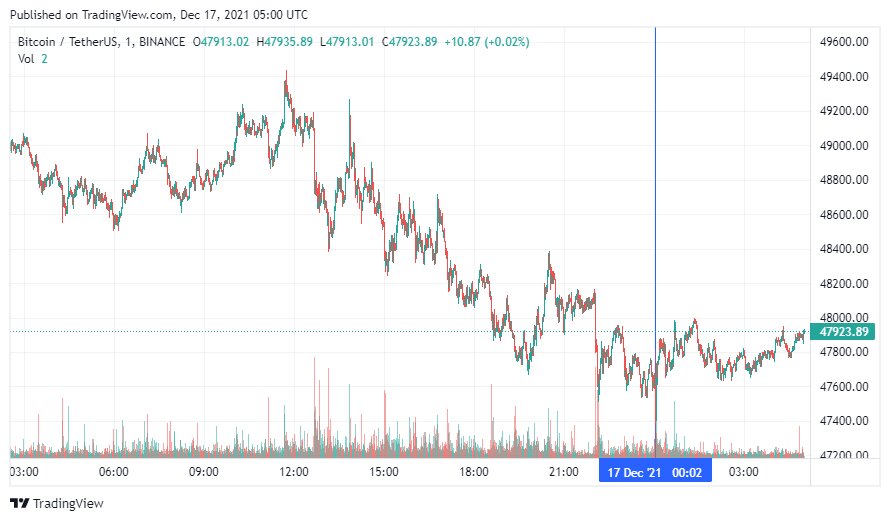 Against the background of the sideways movement of bitcoin, many members of the crypto community decided to share their predictions for BTC.

The Twitter channel whalemap, whose team monitors the activity of large investors in the cryptocurrency market, drew attention to the difficulties that BTC may face if growth resumes.

The authors of the microblogging believe that a sale of bitcoin is possible at the height of $ 64 thousand. Whalemap explained their forecast by the fact that many large investors bought at this level. If the cryptocurrency returns to the designated height, they can, in order to hedge the risks, sell part of the BTC.

The authors of the Root Twitter channel also see the growth potential of BTC. This, in their opinion, is indicated by the analysis of the movement of bitcoin after previous halvings. As a reminder, the last halving of the BTC mining reward was recorded in May 2020. Such changes, due to the formation of a shortage of cryptocurrency in the market, can positively affect its value.

Root drew attention to the fact that the previous phases of the positive movement of bitcoin after halving ended with a parabolic rise in the rate of a digital asset. In their opinion, history will repeat itself ahead of BTC.

Many members of the crypto community also paid attention to indicator signals, which indicate the possibility of bitcoin growth in the near future.

At the same time, investors believe that BTC runs the risk of continuing to move sideways until the end of the month.

Meanwhile, bitcoin’s Fear and Greed Index is in the red. This position of the indicator suggests that at the moment most investors do not consider BTC as a promising asset for investment.