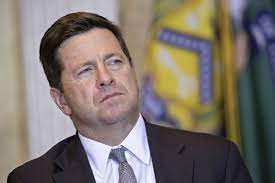 In a recent interview with CNBC, former Securities and Exchange Commission chairman Jay Clayton, who filed a lawsuit against Ripple in his final days in office last December.

Squawk Box host Becky Quick asked a former government official about potential conflicts of interest related to coercive measures that some XRP proponents believe could give Ethereum an unfair advantage.

While declining to make any specific comments on the case, Clayton says the defendants are entitled to their opinion:

Look, this is America. People have the right to defend themselves. They are entitled to their opinion.

Clayton says SEC officials, who are not allowed to comment on the case, are letting the facts stand still and speak for themselves.

Ripple is accused of illegally selling $ 1.3 billion XRP tokens, which the SEC claims are unregistered securities, with CEO Brad Garlinghouse and co-founder Chris Larsen also serving as defendants in the case.

The company began to argue that the SEC gave ether and bitcoin the green light, labeling them as non-securities. However, the agency clarified that it has yet to take an official position on any particular digital currency.

In mid-July, Sarah Netburn, the magistrate judge overseeing the open case disputes in the Ripple case, authorized the withdrawal of testimony from William Hinman, a former director of the agency’s Treasury, who said Ether was not a security in its now famous 2018. speech. In his testimony, Hinman said he had warned Ripple to bring XRP in line with security laws.

Hinman’s law firm, a member of the Enterprise Ethereum Alliance, and Clayton’s joining the hedge fund One River Asset Management shortly after he left the SEC, have served as a breeding ground for speculation in the XRP community.

Ripple executives shy away from spreading conflict of interest conspiracy theories, the only thing Garlinghouse said in an interview was that it “smells bad.”

Lawyer Jeremy Hogan was outraged that Clayton focused his attention on his personal unwillingness to comment on the situation, and not on the ban on officials:

Clayton on his decision to file the Ripple lawsuit on his last day as Chair: «I’m not going to comment…»

He just doesn’t want to talk about it. For his own personal reasons. https://t.co/1wJFsizlIx pic.twitter.com/7hTi3E3v0U

SEC abandons intention to recognize XRP as a security