Miners mined 90% of Bitcoin, it will take 119 years to mine the remainder

On Saturday, miners mined 90% of the Bitcoin emission, the size of which was 21 million at the start of the algorithm, invented and created by Satoshi Nakamoto. The identity of the founder of the digital currency still remains undisclosed, so it is difficult to guess what he was guided by when choosing the rules for the ecosystem. 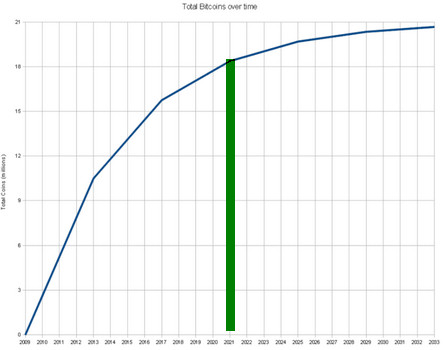 It only remains to state the fact that Nakamoto’s idea of ​​giving away 90% of BTC during the first 12 years of the algorithm’s operation led to the emergence of a multi-billion dollar mining industry.

The exponential growth in the difficulty of Bitcoin mining, laid down by the emission schedule, has led to the creation of an entire industry for the production of ASIC miners and the explosive development of technologies for their chips up to 5 nm in a very short time.

Periodic halving, halving the block reward, has caused the constant doubling of the value of Bitcoin, making it dependent on the cost of mining the cryptocurrency. This figure has become the “absolute bottom” four times throughout the history of exchange trading, reliably stopping large-scale cryptocurrency sales.

The rest of the time, miners mined Bitcoin at a high rate of return, exceeding the cost price several times. In Q3 2021, companies mined BTC for an average of $ 8,000, according to the financial statements of publicly traded companies.

The remaining 10% will be mined for 119 years. In theory, all these years, the price of a digital asset should increase at least 30 times higher than the current mining cost. To this figure of $ 240,000 must be added at least double profitability, as well as a hundred-year inflation.

It is easy to assume that in the XXIII century, Bitcoin quotes can be seen at around $ 500 million. It is difficult to predict how much the technology of its production and energy supply to mines will change. In the meantime, interest in mining is still high, as indicated by the new Saturday historical hash rate records.