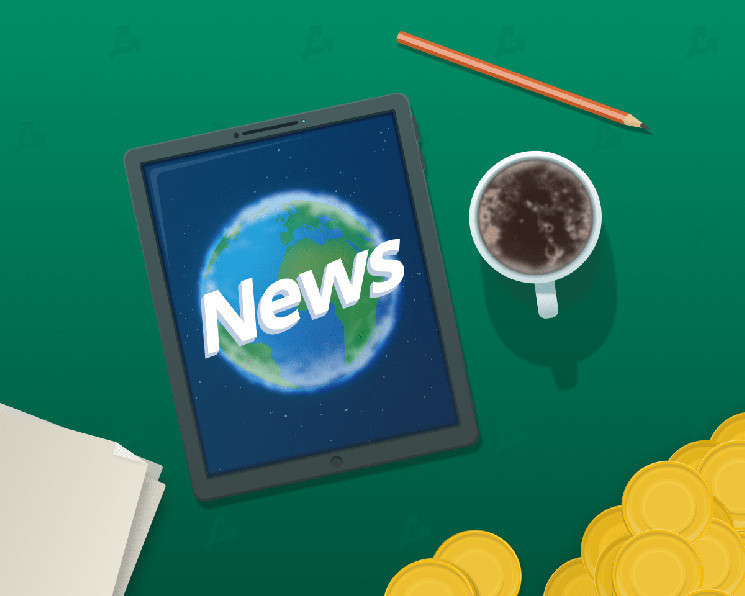 The daily hash rate of the bitcoin network approached a historical maximum, MicroStrategy bought an additional 1,434 BTC, hearings with the participation of top managers of the cryptoindustry and other events of the outgoing week were held in the US Congress.

On Saturday, December 11, the quotes of the first cryptocurrency at the moment dropped below $ 47,000.

At the time of writing, Bitcoin is trading at $ 50,000. The asset has a capitalization of $ 942 billion, according to CoinGecko. On Tuesday, December 7, the daily hash rate of the first cryptocurrency network reached 191 EH / s. This is the second largest value after the peak of 198 EH / s recorded on April 15, 2021.

Most of the top 10 cryptocurrencies in terms of capitalization closed the week in the red. Solana (SOL) and Terra (LUNA) lost more than others – 15% and 19.8%, respectively. 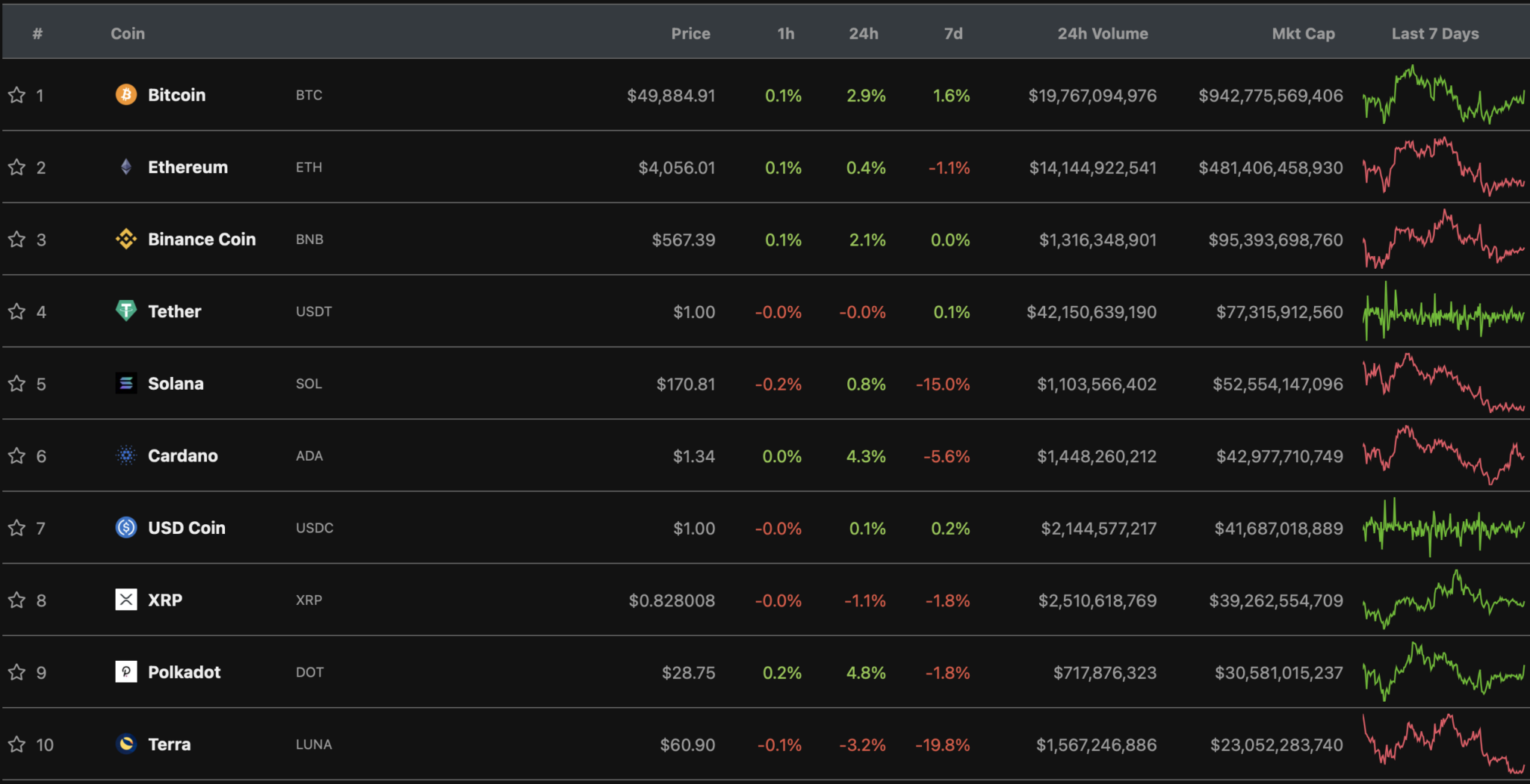 According to the report, the average purchase price was approximately $ 57,477. Trades were made between November 29 and December 8, 2021.

As of December 9, the firm owns 122,478 BTC, on which it has spent about $ 3.66 billion. At the time of writing, the value of MicroStrategy’s digital currency reserves exceeds $ 6 billion.

The price of the first cryptocurrency may rise by another $ 500,000 thanks to the activity of institutions. This opinion was expressed by the founder of Ark Invest Katie Wood.

Such investors are looking for opportunities not related to traditional asset classes and are switching to cryptocurrency “right now,” she said.

If institutions devote roughly 5% of their portfolio to Bitcoin, that would add $ 500,000 to its current price, Wood admitted.

Bitwise questioned Bitcoin’s ability to reach $ 100,000 by the end of the year

Bitcoin is unlikely to have time to update the highs before the end of 2021 and reach the $ 100,000 mark, said Matt Hoogan, chief investment officer of Bitwise Asset Management.

According to him, this level may become a goal for 2022, and the growing support from institutions will act as a driver. There are “fundamental driving forces” for that, Hugan emphasized.

UK parliament says bitcoin is not an investment

Members of the British Parliament indicated to the head FCA Nikhil Rati that buying bitcoin and other cryptocurrencies is not an investment, and appropriate language should not be used in relation to them.

“The words ‘your investment’ equates this with an FTSE 100 company or mutual fund,” said House of Commons member Harriet Baldwin at a committee meeting.

She also noted that the list of unregistered cryptocurrency companies published by the regulator may contribute to attempts at money laundering.

In 2022, the US expects massive adoption of cryptocurrencies with proper regulation and a subsequent bull market. This opinion was expressed by Bloomberg strategist Mike McGlone.

According to him, the growth of cryptocurrencies in 2021 is associated with the monetary policy of developed countries, which sought to mitigate the economic crisis amid the pandemic.

McGlone is confident that in 2022 FRS will curtail the program of emergency stimulation of the economy against the backdrop of rising inflation and the labor market. The decision will contribute to the growth of Bitcoin and Ethereum, the analyst is sure.

On December 8, top managers of the cryptoindustry spoke at the Financial Services Committee of the US House of Representatives. While politicians were divided on the industry, participants in the hearings noted a “high level of engagement” by congressmen.

The agenda of the meeting on the topic “Digital Assets and the Future of Finance: Understanding the Challenges and Benefits of Financial Innovation” were issues related to bitcoin exchanges, the issue of stablecoins, problems of digital asset regulation, as well as the policy of federal departments.

Whereas in the past such meetings were mainly focused on the use of bitcoin for criminal purposes, at the hearings on Wednesday, politicians were interested in fundamental technology, as well as the potential of digital assets.

Visa will drive the massive adoption of bitcoin

The structure, which will become part of the consulting and analytics department, will offer advice to financial institutions, retailers and other firms on everything from the deployment of cryptocurrency functions to the study of non-fungible tokens (NFT).

According to the head of the company’s cryptocurrency business in Europe, Nikola Plekas, the decision was the next step in moving into the field of digital assets. Since October 2020, the payment network has processed $ 3.5 billion in cryptocurrency-related transactions, he noted.

Visa expects its cryptocurrency consulting services to help the massive adoption of Bitcoin and other digital assets as the company seeks to expand beyond the card payments business.

The Russian Federation has developed norms for the confiscation of cryptocurrencies

The Prosecutor General’s Office of the Russian Federation is working on laws regulating the circulation of cryptocurrencies. Rules have already been prepared that will make it possible to recognize digital assets as the subject of a crime and confiscate them.

Prosecutor General Igor Krasnov spoke about the development of changes in a number of regulatory legal acts so that cryptocurrencies in illegal circulation are not only recognized as the subject of a crime, but also there is a legal possibility of their arrest and confiscation.

He noted that the judicial practice in criminal cases, as a rule, recognizes digital currencies as property, that is, the subject of a bribe, but this is not enough to form a unified and sustainable law enforcement.

Bitcoin exchange Binance plans to apply for registration with the FCA to become a fully “regulated firm” within 6-18 months. He did not rule out the creation of a separate subsidiary based on the example of Binance.US in the United States.

To obtain a license, the platform will have to comply with the regulations in the field of combating money laundering and terrorist financing. In this she can be helped by “a few ex-FCA employees and a couple of hundred compliance specialists”. For their work, Binance has opened an office in the UK.

Binance has fully resumed dialogue with the authorities, Zhao said. The platform is in the process of implementing “a number of significant changes in products, internal procedures, and work with regulators,” he added.

If approved by the FCA, Binance will be able to legally offer futures and other derivatives.

In 2021, a large batch of equipment for the production of cryptocurrencies from Georgia and China was delivered to the Zaporozhye Ferroalloy Plant, which is attributed to the sphere of influence of the Ukrainian oligarch Igor Kolomoisky. This is reported in the investigation of the “Scheme” project.

According to journalists, the Georgian company Georgian Manganese has supplied 2,600 mining devices from Bitfury since February. In parallel, the Zaporozhye plant received almost 12,500 devices from Bitmain from two companies from Hong Kong. Deliveries continued in the following months.

The total cost of the mining equipment imported by the plant in 2021 is estimated at almost 750 million hryvnia (about $ 27.6 million at the time of writing). Journalists also calculated that if all purchased devices are turned on around the clock at full capacity, this can bring about 80 BTC per month (almost $ 4 million).

In two to three years, most of the virtual encounters will take place in the metaverse. This forecast was given by Bill Gates in his blog.

“The idea is that you will ultimately use your avatar to meet people in a virtual space that mimics the feeling of being in a real room with them. To do this, you need something like VR goggles and motion capture gloves, ”wrote Gates.

According to the billionaire, people mistakenly believe that the quality of the software behind these simulations will remain the same. He emphasized that the technological aspect of the metaverse is developing extremely rapidly, and over time this process will only accelerate.

The Metaverse and NFTs can be bubbles, Ponzi schemes, or other forms of financial fraud. This is stated in the official blog of the Central Political and Legal Commission of the Chinese Communist Party.

The authors emphasized that many articles and reports point to an existing bubble in the price of digital collections, and the NFTs themselves associate them with risks such as money laundering and financial fraud.

The decentralized finance sector continues to attract increased attention from cryptocurrency investors. ForkLog magazine has collected the most important events and news of the last weeks in a digest.