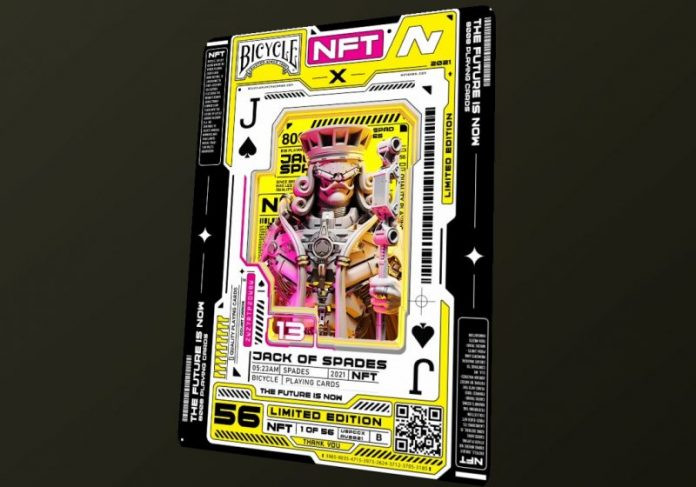 Popular playing card maker Bicycle has announced the release of its first NFT collection, the “Genesis Collection”. It was designed by artist Adrian Valenzuela, and the first element of the collection appeared on the Kolectiv NFT trading platform yesterday.

The Bicycle brand has been well known since the distant 1885. And now, almost 136 years later, a company with a long history joins the modern blockchain world, presenting its first NFT collection. Digital artworks are created by Adrian Valenzuela, according to news.bitcoin.

Bicycle – A traditional brand that has been at the forefront of playing cards for over 135 years and the launch of NFT marks a special moment in our history as we bridge the gap between tradition and innovation.

He believes that this vision of the future will help further attract new users and the next generation, while remaining true to the company’s history.

Their NFT creation will take the collector on “a journey with Bicycle, from ongoing support to perks, including access to exclusive events, presales and whitelisting future NFT cycling,” the company notes.

We can say that the announced NFTs will serve as a kind of VIP membership for the “elite Bicycle collectors club”.

NFT cards (from ten to ace and jokers) will appear in groups every few days. The release of the jokers will be unexpected. In addition, Bicycle is expected to list 8,008 NFT items on December 16 as well. These unique cards are said to include “an animated card case, as well as special coin numbers from 1 to 8,008”. Bicycle NFTs can be purchased with cryptoassets as well as US dollars through the Shopify plugin.

The company appears to be very proud of its breakthrough and ability to innovate for the younger generation. Although it is worth remembering that previously such large brands as Pepsi-Cola and Adidas, Coca-Cola and Rolling Stone, as well as TIME, AMC, Disney, Marvel and many others have already joined the NFT world.