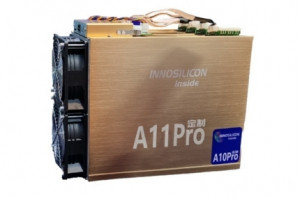 Chinese manufacturer InnoSilicon has begun shipping the A11 Pro Ethereum miner, whose specifications sparked keen interest earlier this year. However, the real capabilities of the device turned out to be lower than anticipated, reports The Block.

Offers from distributors in China this week, however, suggest an average hash rate of 1,500 MH / s at 2,350 W, which translates to 1.56 W per 1 MH / s. This is still the best that modern Ethereum miners have to offer, but the efficiency turned out to be 20% less than originally thought.

The ASIC Miner Value website, which tracks equipment for mining cryptocurrencies across all networks, also posted an announcement that at least the first batch of devices will have lower efficiency than previously stated.

The launch of the A11 series turned out to be associated with another incident. In March, InnoSilicon announced that one of its employees had orchestrated an unauthorized sale of the A11 Pro, claiming an efficiency of 1.25W per 1 MH / s and delivery dates from April to August. He was subsequently fired.

In addition, Ethereum is expected to switch to the Proof-of-Stake consensus mechanism as early as the middle of next year, while the A11 Pro payback at the current ether price and hash rate is 8 to 10 months.