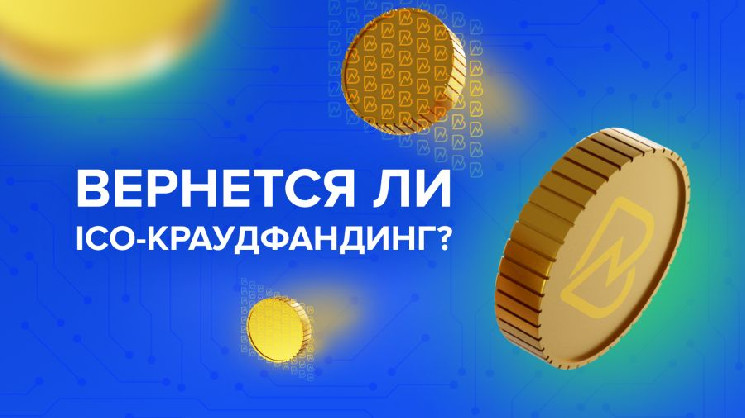 Crowdfunding via ICO: is a return possible?

The ICO market skyrocketed in 2017 and blown away just as quickly. Could this type of crowdfunding be back in popularity, or is it a thing of the past?

Initial Coin Offering (ICO) as an early funding mechanism for cryptocurrency startups appeared in 2013. Its development peaked at the end of 2017 and mid-2018, after which, in just six months, the level of investment fell from several billion to tens of millions of dollars per month, and a year later the market almost died. Traders-analysts of the Binaryx cryptocurrency exchange tell why this happened, are there any ICOs now and what can revive this type of crowdfunding.

Reasons for the ICO Market Crash

Like any complex financial and social phenomenon, the fall in the IPO market was due to a combination of several factors.

Decline in the quality of projects. The ICO mechanism arose as a result of the search for opportunities to raise funds for the early financing of blockchain-based projects. That being said, the majority of those who launched and funded such startups in those years were crypto geeks excited about a new technology that they could play with. In the beginning, it was they who drove the market.

But this did not last long. The rapid growth of the cryptocurrency market and the almost complete absence of barriers to entry into the ICO for developers attracted many people who had only an idea and a desire to get investors’ money as soon as possible. As a result, the quality of the presented ICOs has significantly decreased: in 2018, 71% of projects were launched without a working product or at least its prototype. 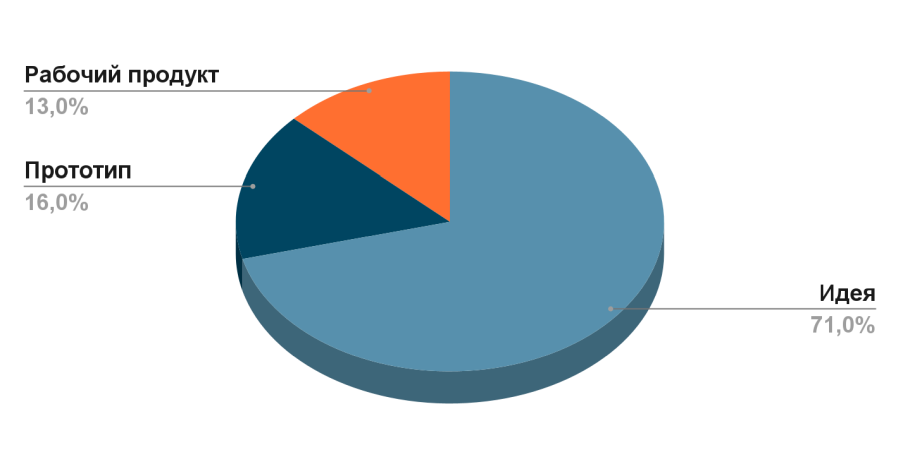 How many ICO startups had a working product, prototype, or just an idea at the time of launch. Source: EY research: initial coin offerings

Due to the decline in the quality of ICOs, the number of successful projects fell: 56% of such startups died within four months after crowdfunding, after a year only 5-10% remained. As a result, people lost money, no longer wanted to invest in ICOs and did not advise all their friends to do so.

The ICO market has become popular among investors due to the rapid growth of cryptocurrencies. In particular, Bitcoin, which attracted interest in this industry, and Ethereum, which showed that anyone can get fabulously rich on ICO. People watched how hundreds of dollars turned into thousands in a few days, and they wanted the same! When the market collapsed in 2018 and it seemed to everyone that it would no longer recover, interest in ICOs disappeared, as people no longer saw an opportunity to make quick money. 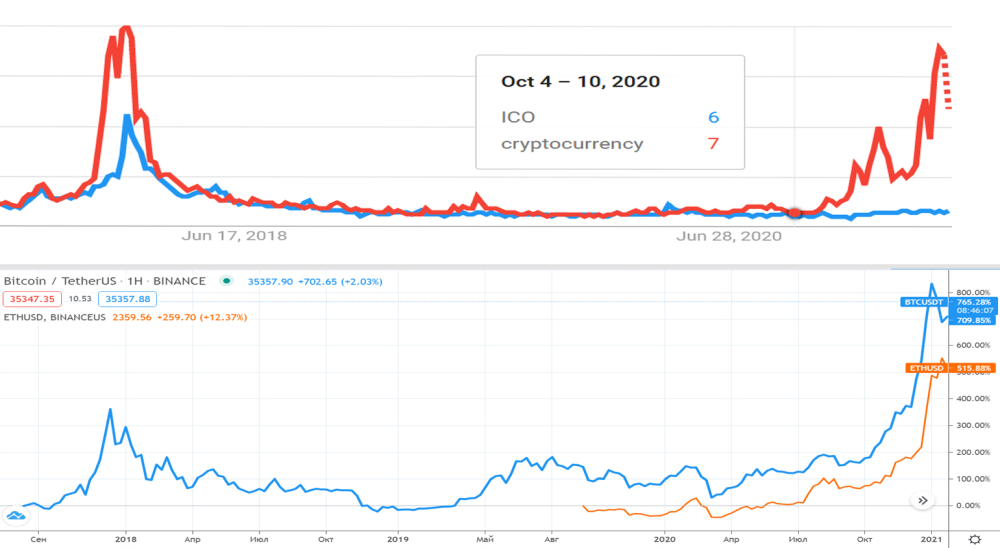 Comparison of the popularity of search queries “ICO” and “cryptocurrency” in Google Trends (above) and the dynamics of Bitcoin and Ether rates in TradingView (below).

ICO crowdfunding allows startups to attract large investments without the cost of intermediaries and compliance with regulatory requirements. However, the lack of regulation and the fact that ICO tokens do not give any legal rights to their holders create excellent conditions for launching fraudulent projects that simply steal investors’ money.

Satis Group LLC estimated that 81% of ICOs were scams and it was widely reported that more than $ 9 million a day or more than $ 3 billion a year were stolen in 2018. After such reports, people finally lost faith in the ICO and began to file lawsuits. As a result, there was a lack of investment and the arrival of regulators on the market. 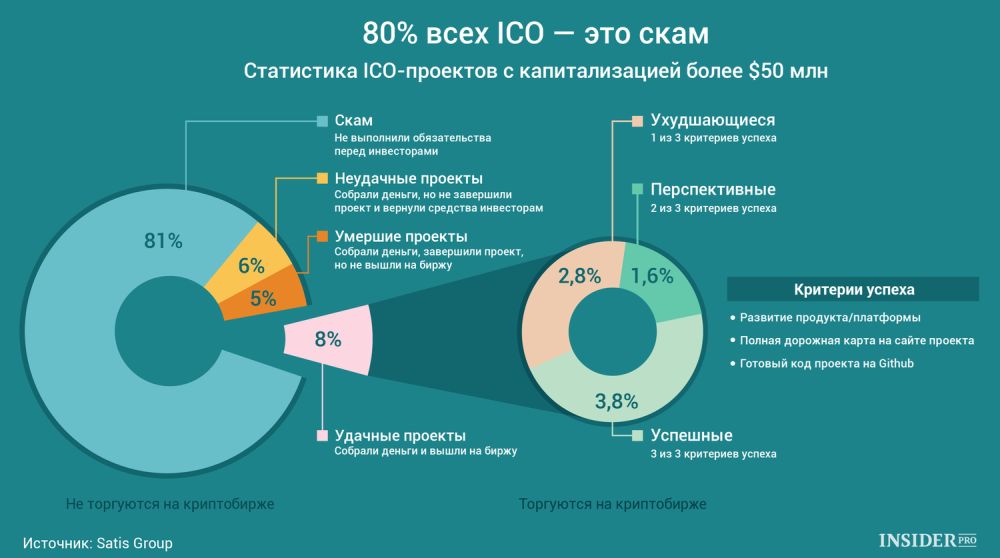 More than 80% of all ICO projects turned out to be fraudulent. Source: Satis Group LLC

Attempt to transform ICO into STO

When regulators (SEC and others) came to the ICO market, they demanded that cryptocurrency startups comply with laws on the issue and distribution of securities, since most ICO tokens were digital securities (stock tokens). Many companies agreed to this requirement and started licensing their tokens. At the same time, in order to dissociate themselves from the bad reputation of the ICO and stand out from the competitors, registered crypto startups began to call their crowdfunding campaigns not ICO (Initial coin offering), but STO (Security token offering). However, the STO market never achieved the popularity of ICOs.

Here are the main differences between ICOs, STOs and IPOs:

Are ICOs being held now?

Yes, there are, but not as many as it was in 2017-2018. No one can name the exact number, since large analytical companies are not interested in this market, and specialized sites, for example ICObench and ICOData, have been closed or have ceased to be updated. Only online message boards work: ICOholder, ICODrops, ICOHotList and others. You can find out about current ICOs on one of these sites.

The number of projects and the volume of investments in the ICO market from 2016 to 2019. Source: 6th ICO / STO Report – PwC. This is the last report; PwC does not make them anymore.

What can bring back the original ICO model?

In their original form, ICOs will never return. Neither investors, nor regulators, nor developers need this. However, simplified crowdfunding for early funding of blockchain projects could become popular again if countries regulate and standardize the industry, and if investors can regain confidence and interest.

Legislative regulation must be carried out in such a way as to preserve the simplicity and accessibility of the ICO. An example of such a decision is the Safe Harbor initiative of SEC Commissioner Esther Pierce. According to her proposal, crypto startups will be given a three-year grace period, during which the sale of tokens will not be considered a sale of securities, and the trading platforms on which such tokens are traded will not be considered as exchanges, brokers or dealers in accordance with US securities law. …

The grace period is provided so that the cryptocurrency platform can develop from a “security” – into a “utility” project. In addition, during this time, the cryptocurrency network can become completely decentralized, which will allow the platform to continue to exist without the need to license itself as a company that issues and distributes securities.

In addition, ICOs will have to disclose information about the source code, the economy of tokens (emission, generation, distribution and management), the development team (composition, experience, their share of tokens during distribution) and places of sale of tokens (as far as possible). If members of the initial development team decide to sell more than 5% of the tokens they originally held, this information must be publicly disclosed to investors.

According to Commissioner Pierce, subject to the adoption of such a law, the blockchain crowdfunding market will be able to continue to attract funds from non-accredited investors using a simplified scheme. But at the same time, investors will be sufficiently informed about the initiators of the ICO and protected from fraudsters.

True, while Commissioner Pearce and supporters of decisions like her initiative are in the minority, which means that there is no need to hope for the recovery of the ICO market.